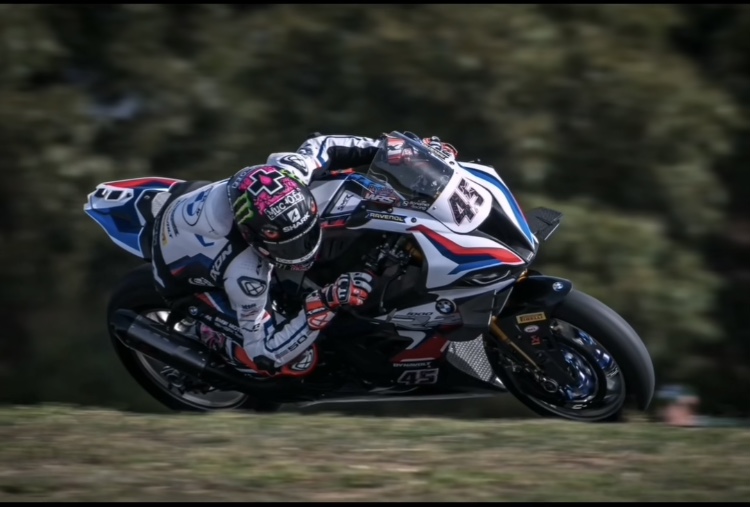 Victory in the earlier Superpole race, meant the reigning champion, Toprak Razgatlioglu, was on a charge, and looking for a complete set of wins across the weekend.

Next lap and Rea barged through on Toprak to take over the lead, and was looking aggressive early on. Further back it was 6th Bassani (Motocorsa Duacti), 7th Locatelli (Pata Yamaha), 8th Redding (BMW Mottorad). Then drama for Mahias (Puccetti Kawasaki) who went down, and his race was over.

With 16 laps to go, drama for Bassani who went down into turn 12, losing the front end of the Ducati, and his race was over. Meanwhile at the front, the leading group of 5 riders had pulled away from the rest of the field.

With 15 laps to go, it was Rea who set the new fastest lap with a 1:40.673, and the pace was gradually getting ramped up, to be more in line with the quicker pace in race 1. Bautista held a gap of 0.5s to his team mate behind in 4th. Meanwhile Lowes was struggling with the faster pace, and was beginning to lose contact in 5th.

Next lap and, as in race 1, Toprak out brakes Rea into turn 1 with a nice looking move, cutting up the inside of the 6x champion. All three of the title contenders were swapping fastest laps, and it was the turn of Alvaro to put in the new fastest lap of a 1:40.647.

With 12 laps to go, Rea repays Toprak by making the same pass on him, as he had to Rea into turn 1, to retake the lead. Meanwhile Bautista sensed an opportunity, and came through on Toprak to move into 2nd. The Turk going from 1st to 3rd in one corner.

Next lap and Bautista was gathering momentum and passed Rea down the straight, and into turn 1 to take over the lead. Again the ZX10-RR had no response to the shear speed of the Panigale V4.

Half race distance, and Toprak again passed Rea into turn 1 to take over 2nd. Bautista meanwhile, held a gap of 0.3 out in front. Further back it was 6th Locatelli, 7th Redding, 8th Lecuona.

Next lap and keen to not allow Bautista to clear away, Toprak continued to push the pace on, setting a new fastest lap of 1:40.4.

With 7 laps to go, drama for Lecuona who went down into turn 14 losing the front end on the downhill cambered corner. He was having a decent race until then, and his race was over. Meanwhile at the front, Toprak was still shadowing Bautista, and then made a surprising move into turn 13, looking to have caught Bautista out, and cut under him to take the lead. The Spaniard did not expect that move, and Toprak was looking keen for a scrap.

Next lap and Bautista would make a reply, blasting past the R1 down the straight and into turn 1, to take over the lead. Meanwhile behind in 3rd, Rea had cooked his tyres, and was losing contact with the two riders ahead of him. It would surely come down to either the Spaniard or the Turk to claim to the win.

With 4 laps to go, Bautista had extended his lead to 0.8s, and Toprak was clearly suffering from tyre wear issues as was Rea. Meanwhile further back it was 8th Vierge, 9th Baz (Bonovo Action BMW), 10th Gerloff.

With the final 2 laps to go, Bautista had broke the advances of Toprak, and had extended the gap to 1.7s. Barring an incident, he would have the win in the bag.

With the final 3 rounds to come, it was looking as though Bautista firmly held the advantage over his rivals.

With the extended break, it was a welcome return to action back on track. The skies were grey and gloomy, but the racing was white hot. Rea (KRT Kawasaki) would claim the Superpole with a fastest lap of 1:35.346, followed by Razagatlioglu (Pata Yamaha) and Bautista (aruba.It Ducati) in 2nd and 3rd respectively.

Lights out and it was Razgatlioglu with the hole shot into turn 1 followed by Rea, Locatelli (Pata Yamaha), Bautista and Lowes (KRT Kawasaki). Mercado (MIE Racing Honda) crashed out, and his race was over.

With 20 laps to go, it was Toprak and Rea setting a very quick pace, and they were already pulling out a gap to the group of Locatelli and Bautista behind. Rea had gone with the harder tyre option and was able to match the pace of Toprak on the softer tyre, Rea setting a fastest lap of 1:36.258. Then drama into turn 6, Rea ran into the back of Toprak making contact with his rear tyre, but both riders were able to stay upright. The gap to Locatelli in 3rd was now at 1.0s.

With 18 laps to go Redding was again showing an improvement on the BMW, and was in 5th. Bautista used the top end speed of his Ducati to blast past Locatelli down the straight and took over 3rd. Meanwhile at the front both Toprak and Rea were still very much locked in battle, with only a gap of 0.5s between them.

With 16 laps to go, Razgatlioglu who was giving everything, ran too hot into turn 3, allowing Rea to come through and take the lead. Positions were as follows: 1. Rea 2. Razgatlioglu 3. Bautista 4. Locatelli 5. Redding (BMW Motorrad) 6. Lecuona (Honda HRC) 7. Vierge (Honda HRC) 8. Lowes.

With 14 laps to go Toprak out brakes Rea into turn 1 to retake the lead. Bautista was struggling to match the pace of the two at the front.

With 12 laps out of 21 remaining, it was now Rea who out braked Toprak again into turn 1, and took over the lead. Neither rider was giving an inch, and you felt the race win would be fought out between the two of them. Bautista had distanced Locatelli, and was having a lonely ride in 3rd. Meanwhile further back it was Laverty (Bonovo action BMW) in 13th and Nozane (GRT Yamaha WorldSBK) in 14th.

Next lap, and Toprak retakes the lead, again it’s into turn 1. Bautista was 1.7s behind in 3rd.

Just over half race distance, and Rea responds yet again, retaking the lead again into turn 1. This was becoming one of the all time great battles between Rea and Toprak, with the lead changing virtually every lap. Meanwhile Bautista was finding good late race pace, and set a new fastest lap of 1:36.7. The Spaniard wasn’t out of contention for the race win yet.

Next lap and the battle between Toprak and Rea showed no sign of ending, and yes, you guessed it, Toprak retook the lead into turn 1, both riders leaving braking to the very latest possible into the corner.

With 8 laps of 21 remaining, Rea again stuffs his ZX10-RR under the Yamaha R1 of Toprak, again it’s turn 1, and he retakes the lead. This battle looked to be going down to the wire. Meanwhile further back there was a 3 way battle for 5th between Redding, and the Honda team mates of Lecuona and Vierge. Bautista however, had now closed the gap to Toprak to 1.0s.

Next lap and once again the lead changed hands, this time the reigning champion retakes the lead, again it’s turn 1. The constant battle between Rea and Toprak had allowed Bautista to catch them, and he was now 0.4s behind, and was looking to have managed his tyres well.

With 6 laps to go, Rea was pushing hard, and ran wide into turn 1, allowing Bautista to come past and into 2nd. The Spaniard now had Toprak in his sights, and was looking quick. Meanwhile further back, Lecuona had got past Redding, and was now in 5th.

With 4 laps to go, Toprak held a gap of 0.4s to Bautista. Rea looked to have completely lost tyre grip, and was losing contact with the two at the front. Meanwhile further back it was Lowes in 8th, Baz (Bonovo action BMW) 9th and Rinaldi (aruba.it Ducati) in 10th.

With 2 laps remaining, Bautista was all over the back of Toprak and looking for the pass. The hard battle between Rea and Razgatlioglu had taken a toll on the tyres, and both of them were now struggling with limited grip in the closing stages of the race.

Last lap, and Toprak was desperately still trying to keep Bautista at bay. Into the final corner, and Bautista got the drive out of the corner to power past Toprak and pip him to the line. Toprak looked disgusted and shook his head, but Bautista had judged the race to perfection using all of his experience to claim the win. Top ten positions were as follows: 1. Bautista 2. Razgatlioglu 3. Rea 4. Locatelli 5. Vierge 6. Lecuona 7. Lowes 8. Redding 9. Rinaldi 10. Baz. If the Superpole race and race 2 are anything as exciting as this one, race fans are in for a treat.

In World Superbike news  Chaz Davies is to be the Riders’ Coach for the Aruba.it Racing – Ducati Team. 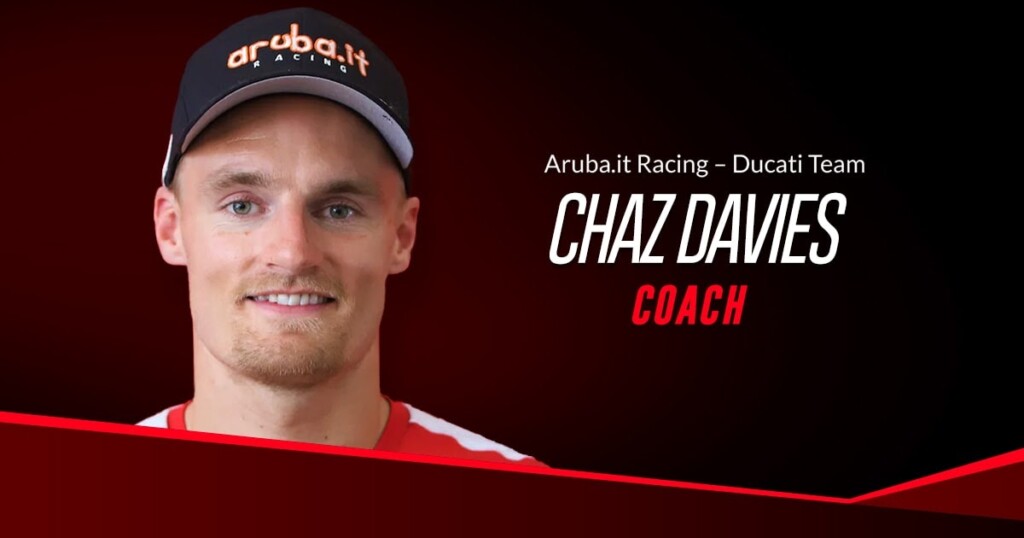 “We are happy to be able to count on Chaz again, albeit in a new role both for him and for our team. His experience will certainly be of great help to our riders, allowing them to express their full potential. His contribution to the SuperSport project will also be fundamental for both Nicolò Bulega and the team, as the Panigale V2 has the DNA of the twin-cylinder Superbikes on which Chaz has achieved  outstanding results over the past years”.

“I’m absolutely thrilled to remain part of the racing world and especially with the Aruba.it – Ducati family, with whom I enjoyed the best years of my racing career. It will be an interesting perspective to see the action from ‘the other side of the fence’! I believe that with my seven years of experience as an official Ducati rider and knowledge of both the Ducati V2 and V4 bikes I am well equipped to contribute to the future success of the team. We have excellent riders for the 2022 SBK/WSS campaigns and I will give everything I can to maximise their potential. I want to thank Stefano Cecconi, Feel Racing and Ducati for this opportunity and can’t wait to get started!”