Tis the season for Formula One car launches, and while Haas were first past the post, Williams are the second team to break cover with their 2018 challenger, the FW41. The Grove based outfit were beaten by the American team, who revealed their VF18 racer yesterday.

The 2018 car has a much more aggressive look, as per the new regulations for this season. The livery is virtually unchanged with some suave looking tweaks to the driver number display, but the iconic Martini stripes with a white chassis remain. The halo, which comes into force this season, has been integrated well into the design, with a solid white finish.

The dark setting in the images could be so that designers can’t steal any of Williams’ ideas while the black on the livery adds a nice switch up from iterations past.

With Paddy Lowe coming in from Mercedes last year, this is the first car he’s helped develop, so time will tell whether his tactical nous has transferred over.

After an average 2017, which saw Williams finish fifth in the constructor’s standings, losing out to Force India for that coveted fourth spot, the team will be keen to press on and reclaim that place in 2018.

There was a high point last season though, with Lance Stroll taking a superb third place in the madcap Baku GP. He could have finished second if it wasn’t for a resurgent Valtteri Bottas in the Mercedes pipping him to the line.

Stroll remains with the team, with Felipe Massa retiring for good this time. Russian Sergey Sirotkin comes in to partner the young Canadian. Sirotkin has impressed as a Renault test driver and throughout his time in GP2, and means Williams have one of the youngest and most exciting driver lineups on the grid.

There were talks of popular Pole Robert Kubica returning to the sport with Williams, but they have instead hired him as their reserve driver. This is still no mean feat considering the severity of his accident in 2011 which saw him effectively retire from Formula One.

The car is ready, but are Williams?

While the F1 community has been keenly watching their social media feeds for their favorite teams’ 2018 car reveal dates and marking off the days until Williams Martini Racing’s announced reveal on 15 February, Haas F1 Team stole a march on everyone. In a delightful Valentine’s Day gift to fans, Haas revealed renderings of their 2018 challenger in a video tweeted at 10:01 AM Eastern time, along with accompanying press releases and web site updates. One of the only hints of this upcoming reveal was found in an article published on 12 February in Germany’s Auto Motor und Sport.

Fans, analysts, and the media wasted no time poring over the images. 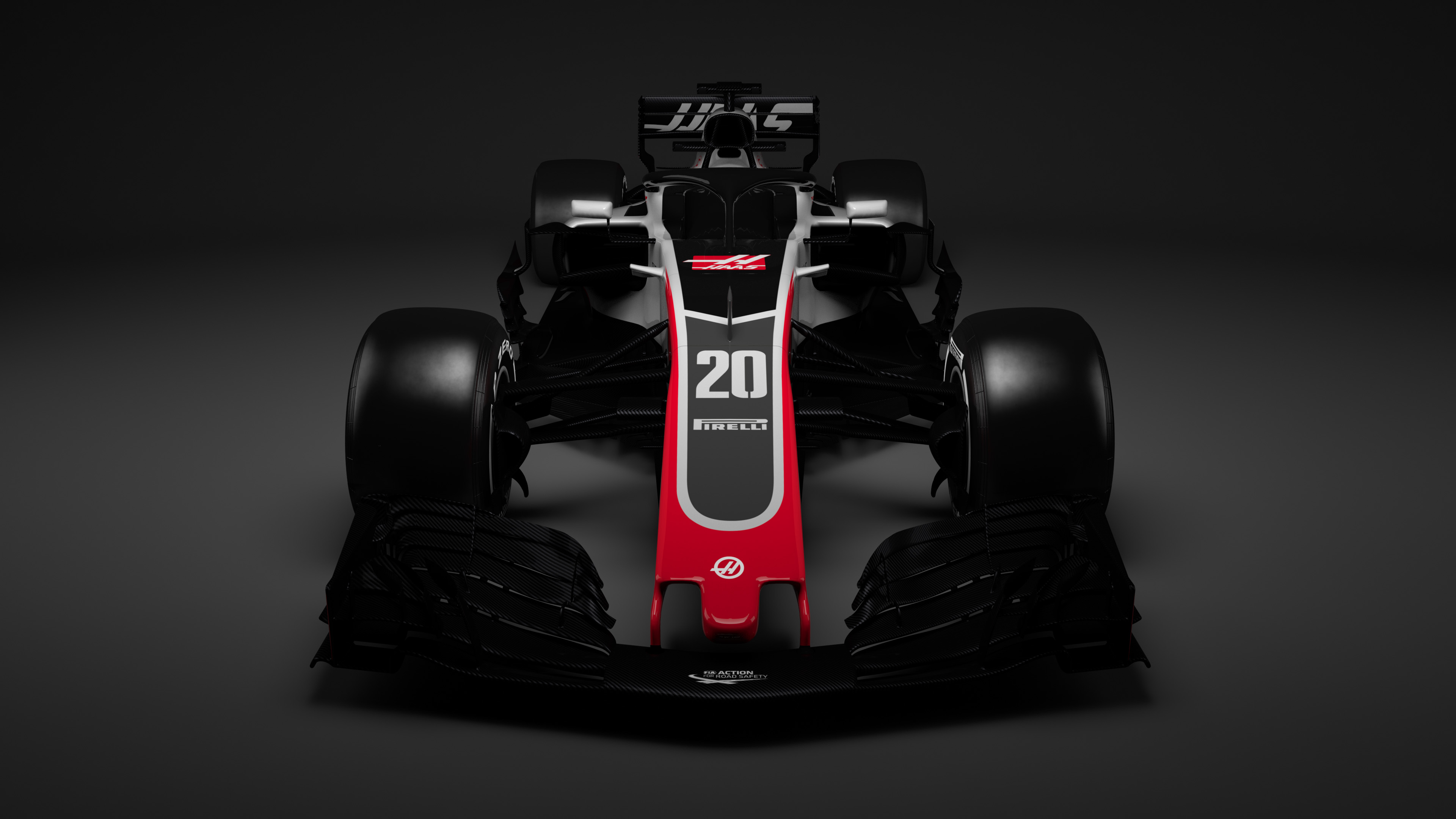 Although minimized in the initial renderings by being set against a dark background, the Halo fits well with the chassis. The airbox has been modified to accommodate the altered airflow, and there is a small, jagged screen just behind the front pillar of the Halo to influence airflow through the cockpit. Congratulations to Haas’s engineers, aerodynamicists, and designers for rising to meet the many challenges the Halo introduced and producing a good-looking solution.

The nose and front wing are more evolutionary than revolutionary in comparison to those on the VF-17, though clearly developed further. The nose vane shows continued development, and the sidepod vanes have become even more flamboyant along with the bargeboard.

Haas is already taking advantage of technical loopholes, and has included a small wing at the back of the restrained shark fin, above the exhaust. We will likely see similar aerodynamic features from the other teams. 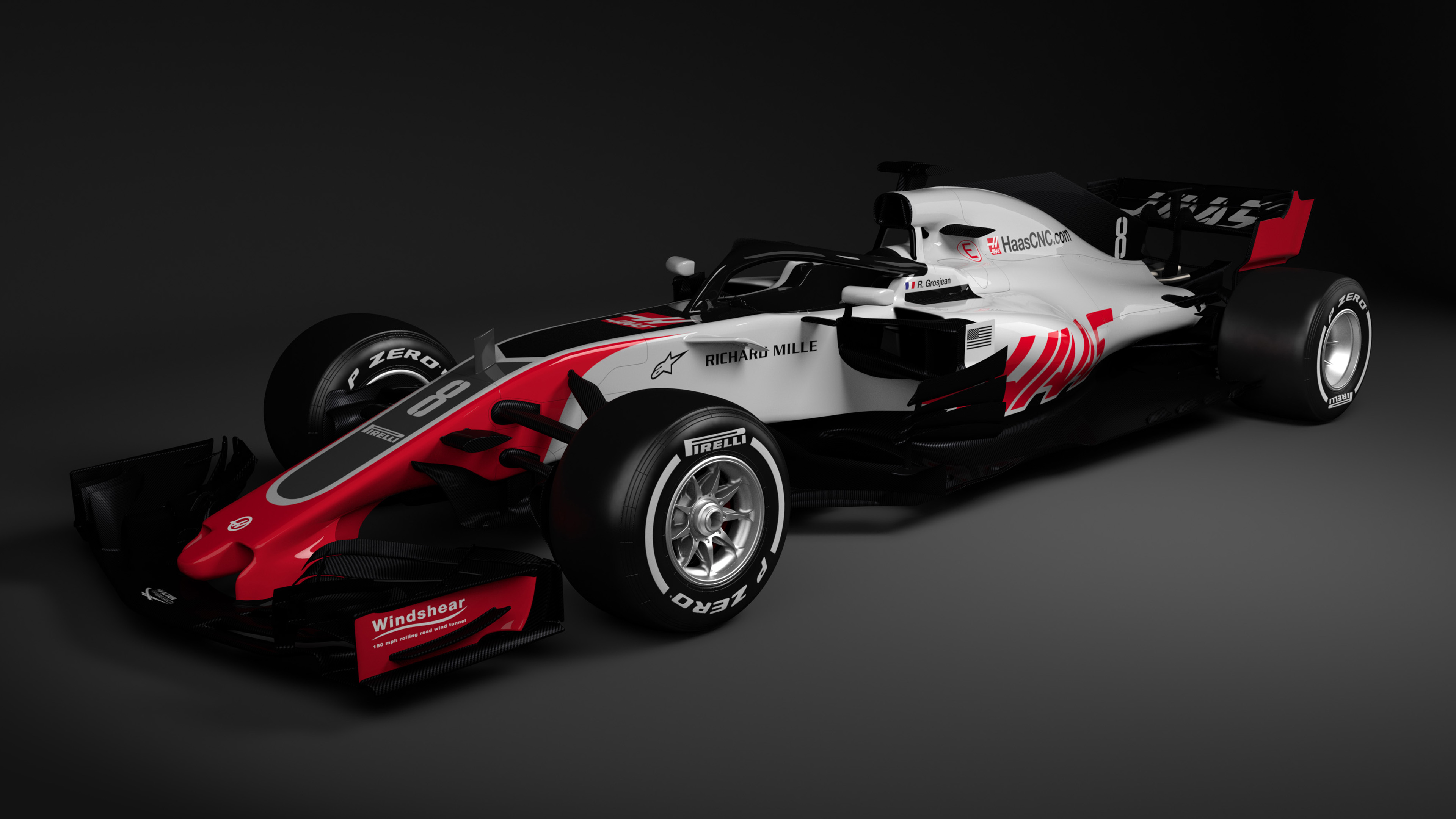 Haas’s partnership with Ferrari shows through in the sidepod inlet design, though Haas’ designers have developed them in a different manner. The partnership with Ferrari open some interesting doors; Craig Scarborough points out that as Haas is using Ferrari suspension uprights, Ferrari won’t be going with a high top wishbone. It may be possible to extrapolate some of the other features on Ferrari’s 2018 car in a similar fashion, and it should be interesting to see what ideas the F1 community puts forth leading up to Ferrari’s 22 February reveal. 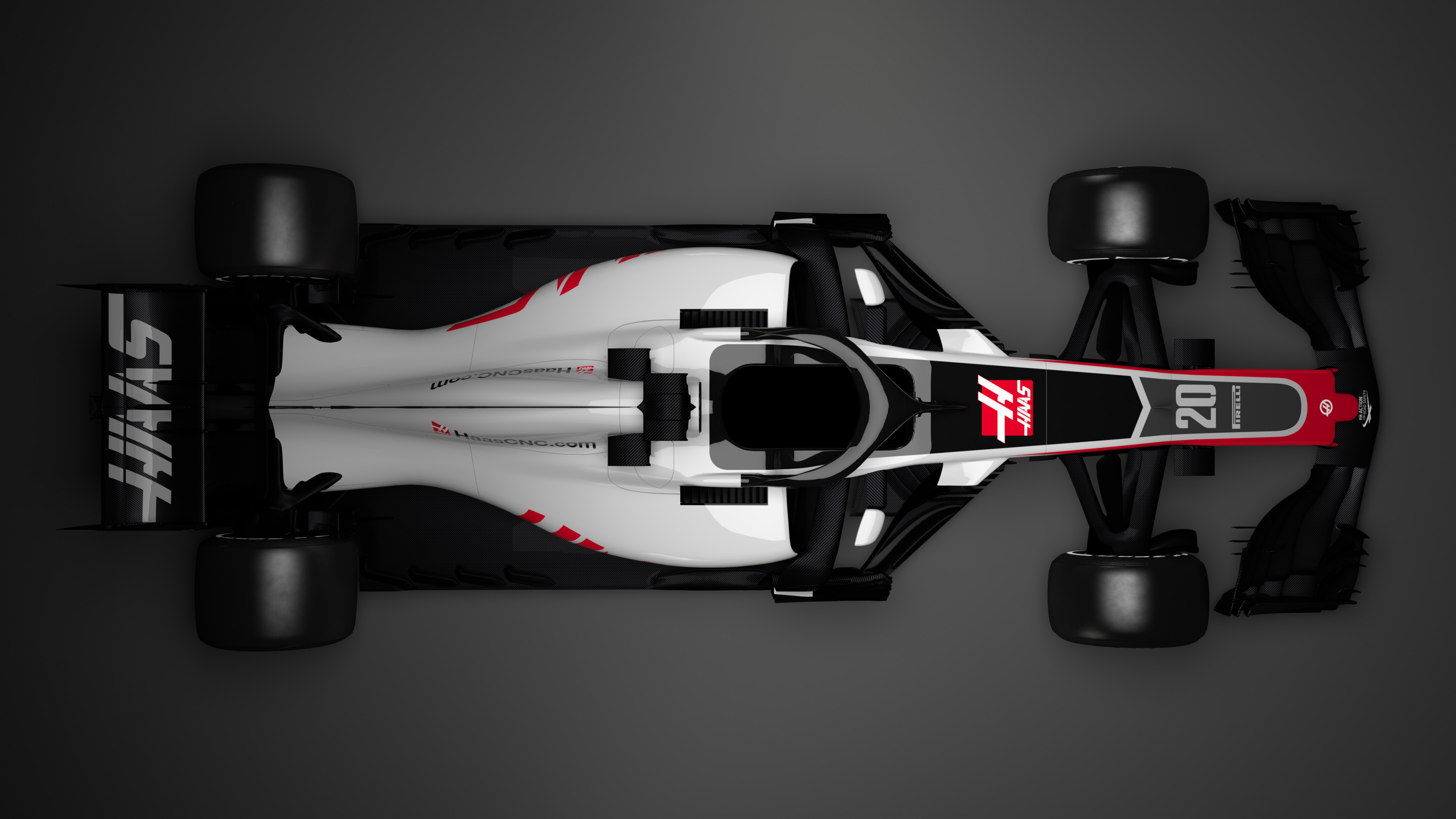 Haas F1 Team’s VF-18 is a good-looking machine. While it remains to be seen whether it will deliver on Gene Haas’s goal of being within a half-second of Ferrari, we can’t wait to find out.

Haas VF-18 First Out the Gate

KANNAPOLIS, North Carolina (Feb. 14, 2018) – Haas F1 Team’s 2018 challenger in the FIA Formula One World Championship, the VF-18, made its official debut today via the organization’s social media platforms and website.

The VF-18 is an evolution of the team’s second car, the VF-17, which carried Haas F1 Team to an eighth-place finish in the 2017 constructors standings. Forty-seven points were scored by the VF-17 during Haas F1 Team’s sophomore season, 18 points more than the total earned in the organization’s debut season in 2016. Incorporating “VF” into the name of the car is a nod to the history of Haas Automation, the team’s title sponsor. The first CNC machine manufactured by Haas Automation was the VF-1 in 1988. The “V” stands for vertical, which is an industry standard designation for a vertical mill. Gene Haas, founder of Haas Automation, added “F1” to the name to unofficially designate it as the company’s “Very First One”.

As chairman of Haas F1 Team, the “F1” moniker of that first machine has taken on added significance as Haas utilizes Formula One to build Haas Automation into a premium, global brand.

“People see what we can do in Formula One and people believe Haas Automation can build world-class machine tools,” said Haas, whose entry in 2016 became the first American Formula One team since 1986. “Being a Formula One participant brings a level of credibility that you just won’t get through traditional advertising.”

Haas has built Haas Automation into the largest machine tool manufacturer in North America by focusing on the details amid constant refinement. He has applied those same attributes to Haas F1 Team.

“We eliminated a lot of the variables where we knew we were weak,” Haas said. “We’ve focused on what it’s going to take to get our car to be consistent and close that gap to the top teams.”

Beyond refinement, the VF-18 carries the significant addition of the halo and a drastic reduction in the sharkfin.

“The biggest part of the car’s evolution was the addition of the halo,” said Guenther Steiner, team principal, Haas F1 Team. “It took quite a bit of study by the aerodynamicists, but the designers had to work hard to modify the chassis so the halo could survive the mandated loads. The total minimum weight of the car increased because of the halo, and there’s a higher center of gravity simply because of the halo’s position. But, everyone is in the same boat.

“The regulations stayed pretty stable between 2017 and 2018, so the VF-18 is an evolution of our car from last year. It’s less about reinvention and more about refinement. You see elements we had from last year on the car this year.

“Our 2017 car was actually pretty good, but we didn’t always get the best out of it, and that’s what we aimed to change in 2018. We got the car as light as possible to carry more ballast. We were able to do a better job of putting the weight where we wanted it.”

The corporate colors of Haas Automation were carried over to the VF-18. Gray makes up the majority of the livery, augmented with tones of red and black that incorporates the look of Haas Automation’s complete line of vertical and horizontal machining centers, turning centers and rotary tables and indexers. Approximately 1,300 employees encompass Haas Automation, with the Oxnard, California-based company exporting its machines to more than 60 countries. The VF-18 showcases Haas Automation’s commitment to technology and innovation to a passionate, global audience.

“The livery is a little bit of a return to what we had on our first car, the VF-16,” Steiner added. “Its look is clean and precise, just like the machine tools made by Haas Automation.”

Haas F1 Team debuted in the FIA Formula One World Championship in 2016, becoming the first American Formula One team since 1986. Founded by industrialist Gene Haas, Haas F1 Team is based in the United States on the same Kannapolis, North Carolina, campus as his championship-winning NASCAR team, Stewart-Haas Racing. Haas is the founder of Haas Automation, the largest CNC machine tool builder in North America, and he is chairman of Haas F1 Team.

Haas Automation, Inc., is America’s leading builder of CNC machine tools. Founded by Gene Haas in 1983, Haas Automation manufactures a complete line of vertical and horizontal machining centers, turning centers and rotary tables and indexers. All Haas products are built in the company’s 102,000 square-meter (1.1 million square-foot) manufacturing facility in Oxnard, California, and distributed through a worldwide network of Haas Factory Outlets that provides the industry’s best sales, service and support while offering unparalleled cost-to-performance value. For more information, please visit us on the Web at www.HaasCNC.com, on Facebook at www.Facebook.com/HaasAutomationInc, on Twitter @Haas_Automation and on Instagram @Haas_Automation.