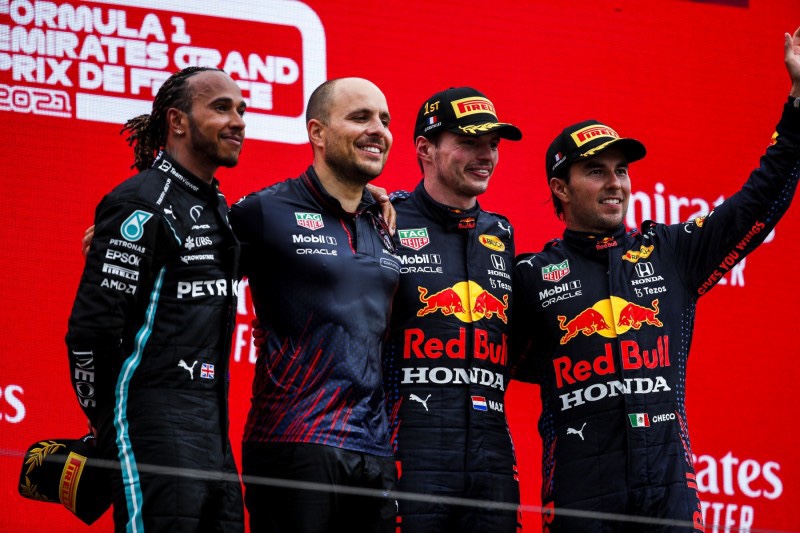 Since returning to France and Paul Ricard in 2018, the two races weren’t ‘thrillers’, Lewis Hamilton leading 105 of the 106 laps raced in 2018 and 2019 combined. Expectation for this race was therefore low, the main talking point being the raising of tyre pressures and temperatures to prevent the incidents that happened in Baku from happening in France.

With rain washing the track this morning and the Formula 3 cars clearing some of the rubber laid down over the weekend, anticipation began to build as the weather conditions changed. Unfortunately for fans hoping the weather could affect the outcome, this turned out to be a dry race.

As the lights went out and they all got a clean get away, it looked like Verstappen had the better start, staying ahead of the two Mercedes. However, he locked up going into turn one, manging to make the corner he then had to correct some huge understeer, making him cut turn two, narrowly missing the yellow bollards on the inside. This gave the lead to Hamilton, who opened up a one second gap by the end of the first lap. The stewards decided no investigation was needed to Verstappen’s trip off track because he had manged to make it around turn one without any issues, therefore he did not need to use the escape road to re-join the track.

There was movement all the way down the field in the opening few laps. Perez didn’t have a great start but was quickly back up into fourth place by the end of lap one. Sainz, Gasly and Leclerc began a tight battle, with only two seconds between the three of them by lap six, it appeared this was going to last all race.

The McLaren boys also started there afternoon of entertaining Formula 1 fans all over the world, by battling each other into turn one, Norris having to concede and use the escape road. Just a few laps later, they came across Alonso who had issues with grip from his tyres on lap 11. Ricciardo first made a great move using DRS into the chicane, Norris then taking advantage of a struggling Alonso in the slip stream and making a move down the inside just three corners later. Both the McLaren’s looked very competitive today, which was great to watch. They then brought the constructors championship battle on track and had some great racing with both the Ferrari’s and Gasly before the pitstops, where the undercut proved powerful and Ricciardo came out ahead of Sainz and Gasly.

Back to the leaders, and Verstappen pitted first, hoping that the undercut would work against Mercedes. Pitting just a lap later, Hamilton came out and it looked tight as Verstappen came down the main straight. The undercut had worked for RedBull, with Verstappen beating Hamilton into the first corner on warmer tyres. RedBull decided to leave Perez out, on the radio saying, “Plan A, plus 3”, seemingly suggesting the one stop plus three laps. This allowed them to pull Perez back into the team race after a not so great start. Perez is well known for his management of tyres, so was able to keep up a good pace whilst out for the extra nine laps.

Appearing to be on a longer strategy than his rivals around him, Norris began to question if it was the right choice before coming into pit much later than everyone else. However, this worked to his advantage, having younger, fresher tyres he made his way through the field with some fantastic moves. He nearly collided with Gasly on lap 29 but managed to pass him just one lap later. He then followed that up by making moves on Leclerc and Sainz for P5. It seems he didn’t get the memo that its hard to pass at Paul Ricard!

By lap 33 Verstappen, Hamilton and Bottas were experiencing issues with graining, especially on the front tyres. All three were talking about switching to a two stop strategy, but Mercedes seemed to hold firm, telling Bottas to stay as they were. RedBull felt different and pulled the trigger by pitting Verstappen just a few laps later. With his teammate the only car between him and the Mercedes, it was a straightforward team move, with compliments all round. The question now was if Bottas could hold up Verstappen long enough for Hamilton to get the win. On lap 45 we got our answer. Already saying over the radio he had no tyres, Bottas managed to defend against a DRS move into the chicane, but went too deep, leaving the door open for Verstappen to show the true straight line speed advantage RedBull had over Mercedes this weekend and making the move. A feisty Bottas came over the radio to explain that this was why he wanted to switch to a two stop.

The battle was now on, and Verstappen was hunting down Hamilton. However, Hamilton had begun to respond to the threat he knew was coming by increasing his speed and matching Verstappen’s lap times, hoping this would be enough to stay ahead. Sadly for him, it wasn’t. Verstappen caught him with two laps to go and inevitable made the move for the lead into the chicane for the lead. A role reversal from Spain a few weeks ago.

Whilst this was happening Perez had caught Bottas and made a great move into turn one for the final step on the podium having kept up with the top three all race and now benefiting from the poor strategy choice at Mercedes.

Verstappen took a great victory, Hamilton finishing P2 and Perez P3. This is the first time RedBull have won three consecutive races since 2013, with Verstappen and Perez being on the podium together for the first time ever. This Win for Verstappen means he stays in the lead of the driver’s championship for the rest of the triple header and definitely makes this interesting in the title battle for both the constructors and drivers championships.