IndyCar fans were treated to a new race winner on Sunday, as Alex Palou stormed to victory at the Honda Indy Grand Prix of Alabama season opener. The Spaniard managed to hold off the late-charging Will Power by half a second to take his first career win on his debut for Chip Ganassi Racing.

The race started in dramatic fashion with Arrow McLaren SP pole winner Patricio O’Ward leading Alexander Rossi, Alex Palou, and Will Power off the line. They didn’t even get to finish a full lap before Josef Newgarden brought out the first full course yellow after colliding with Colton Herta, Hunter-Reay, Felix Rosenqvist, Max Chilton, and Rinus VeeKay. The two-time IndyCar champion subsequently retired from the race followed by Herta and Chilton.

After the restart, O’Ward led with an incredibly difficult and tail-happy car until pitting on lap 18 of 90, opting to switch from his fresh set of red tyres for a used set of blacks and committing to a three-stop strategy. The drivers who committed to a two-stop strategy stayed out for 14 laps, during which O’Ward lost time in traffic. Alex Palou was the main benefactor who gained the ned lead from both O’Ward and Rossi.

Palou made his first put stop on lap 31, also choosing to go for used blacks and emerging ahead of Pato O’Ward. However, Palou struggled to get heat into the tyres and was promptly passed by the Mexican in turn five.

After the other two-stoppers including Power, Dixon and Ericsson pitted, O’Ward retook the lead looking far more comfortable on the black compound tyres. On lap 45, O’Ward made his second pit stop, swapping back onto the softer red compounds. This time, it was the Mexican who struggled with tyre temperatures and was passed by both Sebastian Bourdais and Rinus VeeKay.

This left the victory in the hands of those on the two-stop strategy. Marcus Ericsson was the first of those to take their final pit stop on lap 60, choosing to go for another set of blacks.  This worked to the Swede’s advantage who passed O’Ward with ease before the McLaren driver made his final pit stop on lap 6, just four laps after Palou and Dixon.

After all the remaining pit stops this left Alex Palou with a sizeable margin ahead of Will Power, Scott Dixon and Pato O’Ward, separated by just ten seconds. However, with almost all of his push-to-pass still to use. Power set about chasing down Palou for the lead.

On the final lap of the race, Power used almost all of his push-to-pass and made it to within half a second of the leader. But it was one lap too late as Alex Palou crossed the line to take his first career win, holding off two series champions in the process.

Scott Dixon finished in third while Pato O’Ward had to settle for fourth, less than one second away from the podium position.

Bourdais, VeeKay were next, followed by Graham Rahal who passed Marcus Ericsson with a few laps to go. Ericsson only just made the chequered flag before running out of fuel. 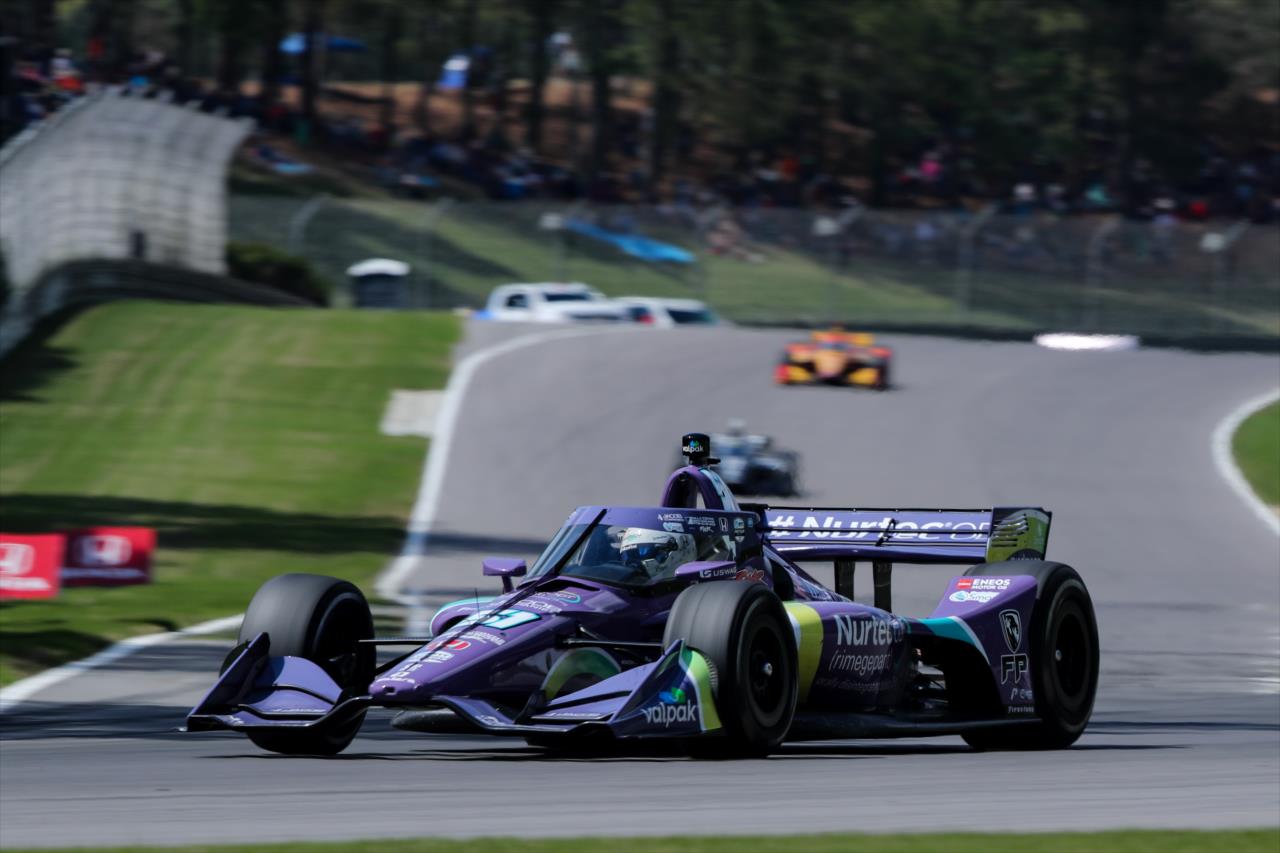 Former F1 driver Romain Grosjean was the highest placed rookie. He was one of those who attempted the two-stop strategy and was able to round out the top ten.

Penske’s Scott McLaughlin finished in 14th, while seven-times NASCAR Cup series champion Jimmie Johnson struggled to adapt to his new machinery. He spun after the first few laps which brought out a full course yellow. He eventually finished several laps down from the leaders.