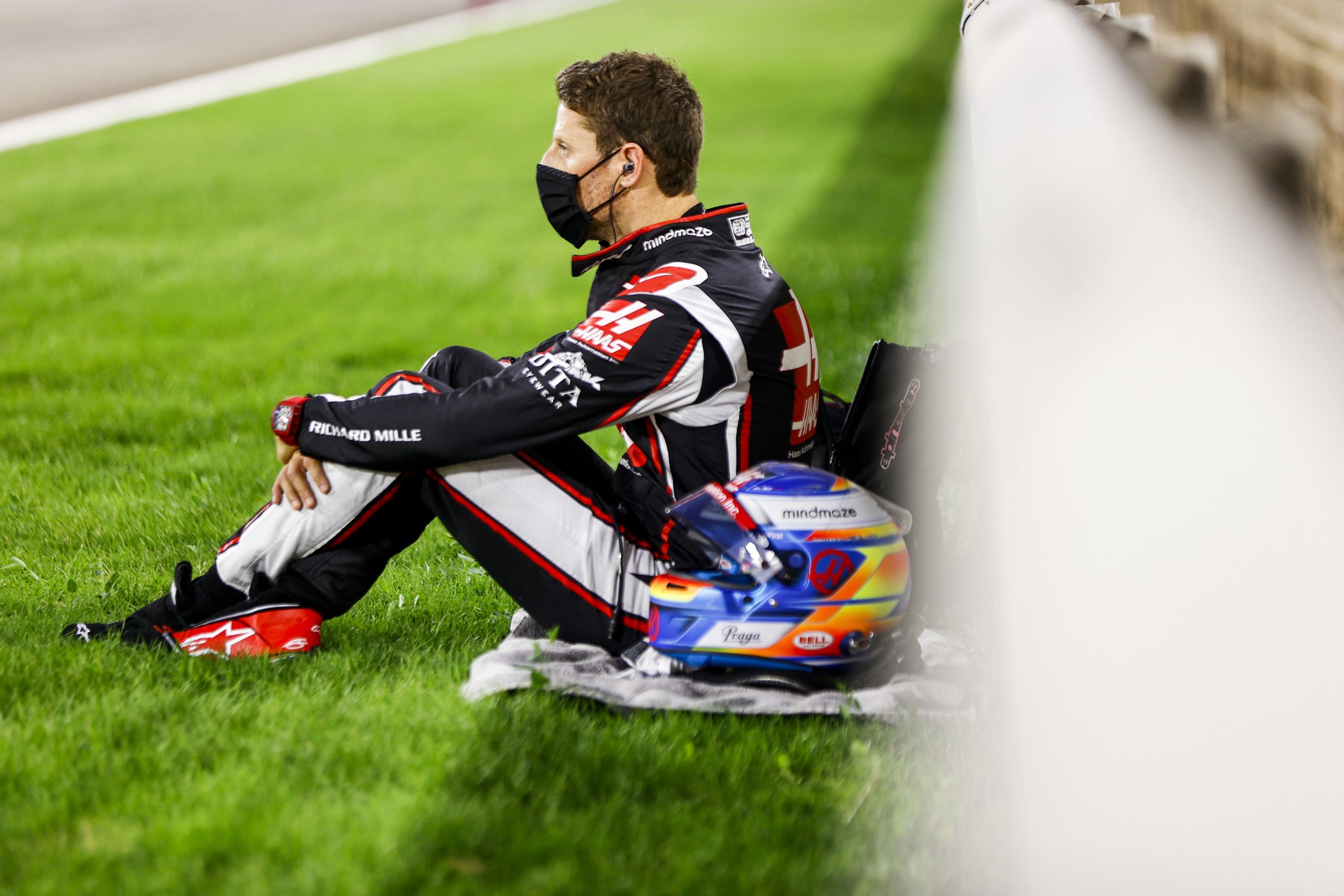 I’m not going to show you the pictures or the video, because I had my fill of replays during the red flag period. I tend to agree with Daniel Ricciardo – the sheer number of replays was unnecessary and disrespectful.

But I’m getting ahead of myself. If you missed it, Romain Grosjean experienced a terrifying shunt at turn 3 on the opening lap of the Bahrain Grand Prix today (29 November 2020, at the time of writing) after contact with Daniil Kvyat’s Alpha Tauri. Grosjean’s Haas arrowed into the crash barriers on the right side of the circuit at 221 km/h. The awesome force of the impact – it is no exaggeration to say that my breath caught in my throat and I was brought to inner stillness merely seeing it –  was such that the front of the car became wedged in the barrier, and the rear of the car physically separated. The fuel cell was torn open, and the car was engulfed in flames. Arrestors having failed, the Haas’ wheels came to rest on opposite sides of the track. The marshals at their nearby post were fortunately spared anything more serious than a good scare.

In a resounding victory for the halo, developed in the aftermath of Jules Bianchi’s tragic 2014 crash at Suzuka, Romain Grosjean survived the impact to emerge from the flaming wreckage of the entangled car and barrier under his own power, quickly assisted by Dr. Ian Roberts as the medical car arrived on scene while marshals immediately began combating the blaze.

Grosjean himself, once a critic, unsurprisingly A convert . Thanks to the fantastic safety engineering in the modern era, Grosjean is recuperating in hospital, with only minor burns to show for his ordeal. Without the halo the motorsport world would likely be mourning a driver.

In light of recent close calls involving vehicles being allowed to race with recovery vehicles and personnel near the track, it’s important to emphasize how Formula 1’s safety procedures worked perfectly today. The practice of having the medical car follow the field on the first lap proved its wisdom, had Grosjean required more urgent intervention help was on hand within seconds rather than minutes. The marshals’ training and discipline was in evidence as they immediately began firefighting efforts. This too could have made the difference between life and death had Grosjean not been able to escape on his own.

Despite the victories for safety, the events in Bahrain show that there is still room to improve. The lack of energy-dissipating material in the runoff area and as part of the barrier must be considered and remedied. Properly-constructed barriers are highly effective in transferring energy away from an out-of-control vehicle, as Max Verstappen’s pre-halo encounter with the wall at Monaco in 2015 after colliding with Grosjean illustrates. I don’t mean to imply that the barrier design at Sakhir was ill-considered, but rather that the circumstances leading to Grosjean’s crash may have simply been unanticipated. It’s easy to see once it’s happened, after all.

Romain Grosjean and the motorsport community are fortunate today. I hope that FIA will take a moment to evaluate barrier construction at all major circuits and take into account previously unconsidered possibilities for impacts and undertake efforts to mitigate newly seen risks.

Motorsport is always going to have an element of danger, this is inherent in pushing humans and machines further in the quest for speed but there are so many things we can do to mitigate the risks. The halo proved its worth today, and other safety procedures showed their wisdom, but there is still more we can do to ensure that our drivers live to race another day.