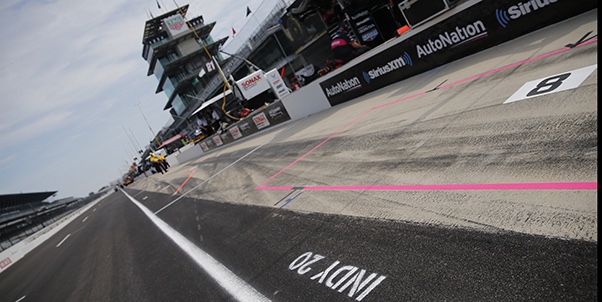 The first Indy Harvest Classic was held way back in 1916, so here we are in 2020, about to witness the next running, now called the Indy Harvest GP, to be run in two parts on the Indianapolis Motor Speedway’s 2.439-mile road course Friday and Saturday, October 2-3. Races 12/13 of the NTT IndyCar Series were a somewhat late addition to the often-altered season schedule and will precede Sunday’s 8-Hour GT World Challenge America endurance race.

The previous IMS road course race (the GMR GP) was held during July’s Brickyard weekend after its traditional May running was postponed due to the COVID-19 pandemic. Dixon’s Chip Ganassi Honda ran away with the race after a full-course caution shuffled the field on lap 36/80. Dixon had stopped three laps earlier while the leaders at the time pitted under caution after Oliver Askew’s crash. Following the green flag, Dixon chased down then leader Graham Rahal on Lap 48 and cruised to a 19.9-second victory after leading 26 laps; his first GMR win after three runner-up finishes. Rahal was second with Jack Harvey taking his first podium finish in third.

This event will mark the eighth and ninth times that the IMS road course has hosted an IndyCar race. So far, only Simon Pagenaud (three times), Will Power (also three times) and Scott Dixon have won here. Power has started from pole position here four times, with the other three poles going to Sebastian Saavedra, Pagenaud and Felix Rosenqvist.

Seven drivers are still mathematically eligible for the 2020 IndyCar championship. Dixon on 456 points, Josef Newgarden -72, Pato O’Ward -118, Colton Herta -129, Will Power -150, Graham Rahal -155 and Takuma Sato -156. There will be no double-points available at the St. Petersburg finale, however. So with a maximum of 54 points available from any race (50 for the win, 1 for pole, 2 for leading most laps, 1 for leading a lap), drivers emerging from Friday’s race more than 108 points behind Dixon will be out of the title running. Dixon will clinch his sixth championship a race early if he is more than 54 points ahead of his nearest pursuer come Saturday evening.

Helio Castroneves will be temporarily replacing Oliver Askew in the Arrow McLaren SP after he was deemed not medically fit to race. It marks the third time in three years that the Indianapolis 500 winner has taken part in the Indy Road Course since his retirement from full-time racing.

Conor Daly is back with Ed Carpenter for his usual road course duties while Dryer & Reinbold will extend its schedule, entering Sage Karam for the weekend.

Finally, Zach Veach has permanently stepped out of the Andretti Autosport No. 26, making way for James Hinchcliffe for the remaining races and perhaps next season. Hinchliffe had driven for Andretti up until the 2015 season when he moved to Schmidt Peterson Motorsports.

OUTLOOK FOR THE WIN

In my opinion you cannot overlook the Penske drivers for this race, who have won a staggering five out of the last six iterations of this race. Will Power has won here three out of six in that time and will be looking to improve on his race winning performance at Mid-Ohio.

Remember it was Power who led from pole position this time back in July when a poorly timed caution cycled him back into the pack. He will have the ‘bit between his teeth’ to right that wrong and push for a top three championship position.

OTHERS TO LOOK OUT FOR

As we go into this race Rinus VeeKay still leads the coveted ‘Rookie of the Year’ title 39 points ahead of his nearest challenger Alex Palou. With Askew withdrawn, there is very little competition going this weekend. Rinus has been consistent and has pulled off some staggering overtakes this year. I expect him to carry on in a similar fashion this weekend.

Also, I fully expect Colton Herta to do what he has been doing all season. In his sophomore season, he is currently fourth in the standings with both a win and a pole position to his name. His win last weekend was a just-reward for his performances lately, and I expect, with a few improvements here and there, that he will be a fully fledged title contender in the years to come.

WHAT TIME IS THE RACE?

WHERE CAN I WATCH THE RACE?

Coverage in the UK for the races will be on Sky Sports F1. However, you can also read our session reports right here, on ThePitCrewOnline.