Summer has well and truly arrived in Ireland; lambs are skipping around the fields, birds are singing in the trees, hard slicks are the tyre of choice and the Irish Tarmac Championship is blasting its way through valleys and over mountain passes, shattering the tranquility.

The Easter Stages and the Killarney Rally of the lakes made up rounds 3 and 4 of the Championship and with the two rounds taking place only two weeks apart, there has been little time to catch breath.  Both rallies were contrasting in terrain, the Easter Stages took place in the fertile plains and rolling hills surrounding Lough Neagh in the Northeast of the island and the Rally of the Lakes which took place in the rugged mountains of Kerry in the Southwest.  There has been one constant element in the Irish Tarmac championship this season however and that is the Fiesta of Craig Breen and Paul Nagle.  So far this season the pair have been dominant.  The results so far are testament to the pair’s dominance, but from the roadside, there are times when Craig is having to drive the R5 close to the limit to stay ahead of the chasing pack.

On the Easter stages, Desi Henry and Liam Moynihan were at forefront of the chasing pack, pushing their Skoda Fabia hard for two days through the Ulster lanes to finish second, only 18 seconds behind Breen.  It was a rally where Henry finally had some well-deserved luck, having been on the pace all season only to run into bad luck on numerous occasions.  Merely stating Henry took second place on the rally doesn’t tell the entire story though, the battle for the podium behind Breen is one that will live long in the memory.

At the end of day one, after six stages, only 12.9 seconds separated Jonny Greer, Desi Henry, Sam Moffett and Callum Devine in the battle for second.  Over nine more stages on day two, the podium battle would rage with fractions of seconds being traded.  On stage eight, Callum Devine and Brian Hoy put in an astonishing time on the longest stage of the rally to take third place overall, but only 3.3 seconds separated second position and fourth position.  On stage nine, Henry responded to move back into third place, on stage eleven Devine responded to retake third …… and this tit for tat battle continued until stage thirteen when Devine dropped 10 seconds with a power steering issue.   There was no stopping Desi Henry and Liam Moynihan now though, with only one second gap to Jonny Greer and Kirsty Riddick in second place, the battle continued unabated.

Over the final two stages, both Jonny Greer and Desi Henry were visibly trying.  Not one inch was given and every available bit of tarmac, and sometimes beyond, was used in the search for fractions of seconds.  When the dust had settled, Desi Henry and Liam Moynihan emerged in second place, 3.5 seconds ahead of Jonny Greer and Kirsty Riddick.

Callum Devine will probably consider himself unlucky not to stand on the podium at the Easter Stages but deserves a special mention.  The podium battle was frantic, the commitment and speed carried by the drivers at the top of the timesheets was visible from the roadside.  A fourth-place finish on a rally of this standard in only his fifth rally in an R5 car is a serious achievement. 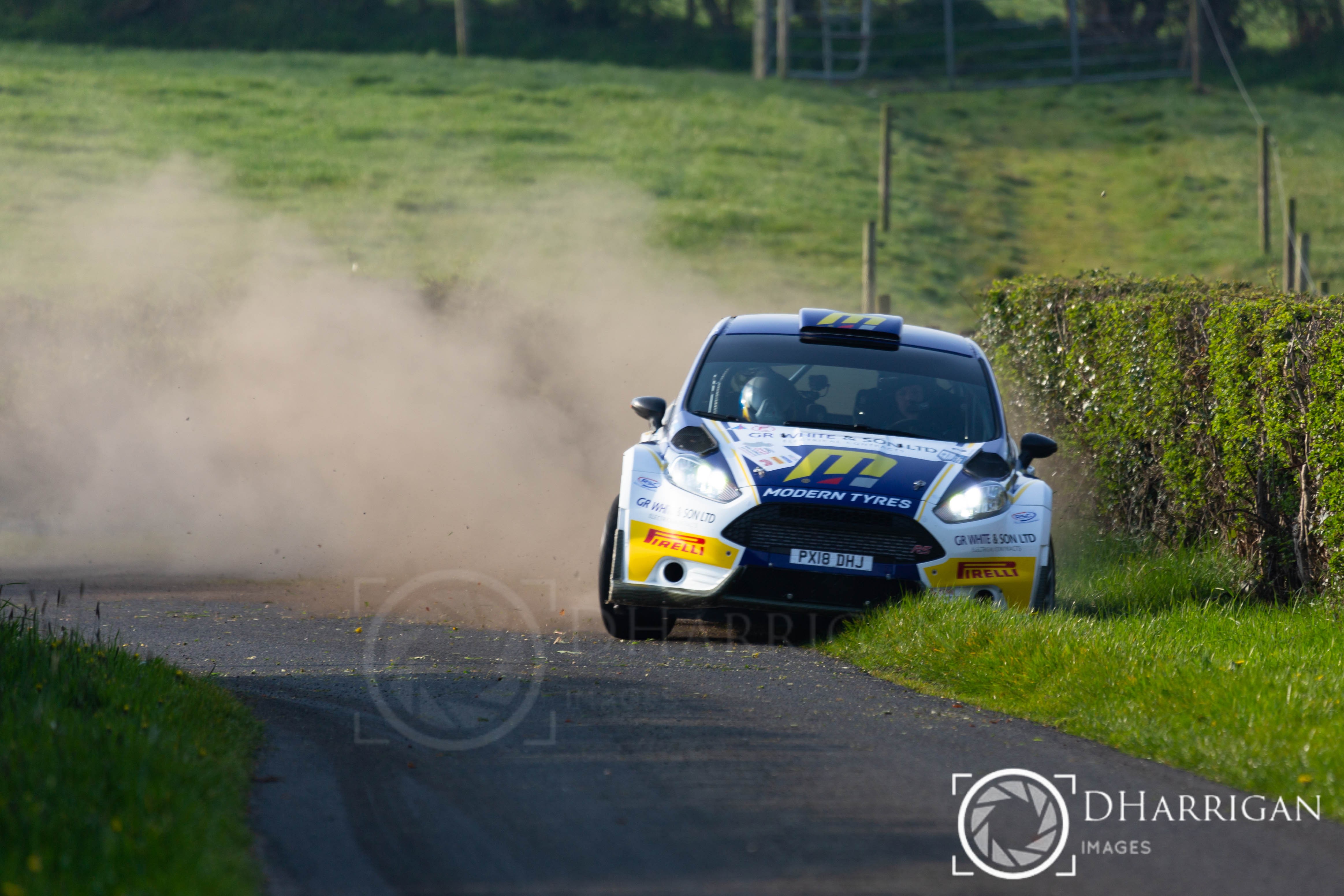 Of the other Championship contenders, after finishing second on both the opening rounds, Alastair Fisher and Gordon Noble had been Craig Breen’s closest competitors for the title.  Alistair had a slow start on the Easter Stages but recovered well on Saturday to overtake Sam Moffett to finish fourth.  In fifth, sixth and seventh places were Sam Moffett, Meirion Evans and Josh Moffett.

After a two-week break, the whole cavalcade travelled almost the entire length of Ireland to Killarney and the legendary stages in the Kingdom of Kerry.  Mention ‘The Gap’, ‘Healy Pass’, ‘Cod’s Head’ or ‘Ardgroom’ to an Irish Rally fan and they will have a story to tell.  The Rally of the Lakes is a place that has to be experienced to be believed.  Only 2 miles from Killarney town center is the start line for the one of the most famous stages in Irish rallying, Molls Gap, which winds its way around the lakes before rising up through the rock-strewn landscape to the famous Gap at the top.

As is tradition, this famous stage opened the rally and the fastest men up ‘The Gap’ for the first time were Craig Breen and Killarney native Paul Nagle.  Second over the stage was Alastair Fisher and Gordon Noble, retaking their position as the foremost crew pushing Breen this season.  Winner of the Easter Stages, Desi Henry, was in third and Callum Devine was in fourth, building on his stellar performance on the Easter Stages.  Day one of the Rally of the Lakes was a day of classic stages tackled in blazing springtime sunshine.  After everything had been settled (and the after sun applied), the rally leaders after the opening day was Craig Breen and Paul Nagle, with Alastair Fisher and Gordon Noble 24.9 seconds behind and Callum Devine and Brian Hoy only 6.6 seconds behind Fisher in third.

Again, day two opened with a high-speed roller-coaster ride up Molls Gap. Callum Devine gave credit to the ‘Coco-pops’ he had for breakfast but, whatever it was, he and co-driver Brian Hoy were the fastest out of the blocks. On both the first loop and the second loop, the former Billy Coleman Award winner was fastest up ‘The Gap’ and after stage eleven, the battle between the second and third placed drivers was only 0.7 of a second.   This battle between Fisher and Devine continued for the remainder of the day, with seconds traded here and there, different stages seemingly suiting each driver.

While the battle for second raged behind, Craig Breen portrayed a façade of calmness as he attempted to control a 20 second lead with the two youngsters snapping at his heels. The view from the hedges slightly belied the calm exterior, a moment on stage twelve on a 3 left over crest, followed by an encounter with a deer on the same stage, showed that the leaders were pushing hard to maintain their lead.  On the finish ramp, Craig admitted to feeling pressure to win the event for his local co-driver Paul Nagle and it was beginning to show ever so slightly.

Over the final two loops of the rally on Sunday afternoon, the battle for second began to sway in the direction of Fishers and Noble but the pair showed no sign of slowing their pace as they won stages 12, 13 14 and 16, pushing Breen to the wire.  Ultimately, Alastair Fisher and Gordon Noble crossed the ramp in Killarney in second place, only 14.9 seconds behind Breen to cement their place as the strongest challengers to the Breen And Nagle partnership this season.  It feels like it is only a matter of time before Alastair wins a round of the Irish Tarmac Championship, and on his performance to date this season, it would be thoroughly deserved.

Callum Devine had to settle for third place, an astonishing result for only his sixth rally in a R5 car.  There was a consolation prize awarded to Callum Devine and Brian Hoy for being fastest up Molls Gap (which they done twice) but to take third place in the Irish Tarmac Championship was probably the drive of the weekend.

The winners once again were Craig Breen and Paul Nagle, continuing their dominance of the Irish Tarmac Championship this season.  However, this was the closest margin of victory the pair have taken this season and it is clear that there is a very hungry pack behind, pushing and clambering to be the first to break the dominance of the man who was rallying with the elite in the WRC last season.

With four wins from four events, Craig Breen and Paul Nagle lead the Championship with 68 points, Alastair Fisher and Gordon Noble are in second place on 50 points and Desi Henry and Liam Moynihan are in third place on 32 points. Despite the dominance of Craig Breen, it is still all to play for in the final three rounds of the championship as just one non-finish could totally change the final outcome.

Next on the calendar for the Irish Tarmac Rally Championship is the jewel in the crown of Irish rallying, the Donegal International Rally. A three-day rallying extravaganza of fast, bumpy, shiny tarmac stages in the hills of the northwest.