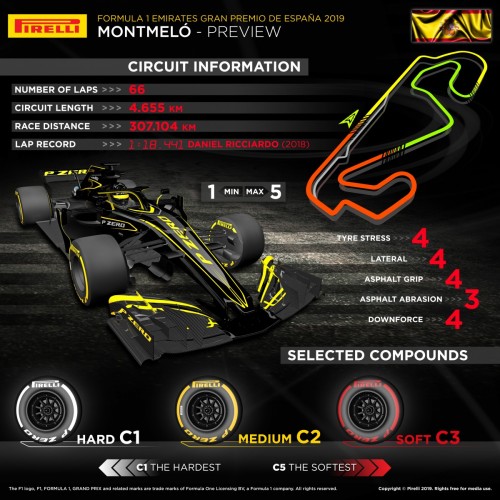 Back we come then, to the place where Ferrari looked on top of the world. Vicariously, we felt an air of excitement that Ferrari, after two years of threatening, may finally have been able to throw the gauntlet down to Mercedes and give us the exquisite title race that 2017 and 2018 had promised, but failed to deliver.

As it has turned out, Mercedes have completely turned the initial outlook on its head, and have made the best team start in the history of Formula One – four one-two finishes to start the year. Where Ferrari had such optimism of the back of winter testing, it doesn’t look as though the Circuit de Cataluña will be any kinder to them than any of the first four tracks have been.

The 16-turn 4.6 kilometre track is full of tight, twisty technical sections that, conversely to the last couple of years, are likely to suit Mercedes over Ferrari, while the Prancing Horses are looking to take advantage of the home straight and the those  between turns nine and ten.

Spain promises to be Red Bull’s first real chance to potentially grab a victory; their car provides the best aerodynamic efficiency of any team on the grid, and following Max Verstappen’s podium in Azerbaijan, this will be a race that one or two associated with the Austrian team will be quietly confident about, especially considering the opportunity for momentum heading to Monaco – another track that will suit the Red Bull car down to the ground.

Away from the front three, this will be the home race for McLaren’s Carlos Sainz, who is hoping on an improvement on his start to the season, which has included unreliability with the car, and being outperformed by new kid on the block Lando Norris, who has made an absolutely brilliant start to life in Formula One.

At the back, Norris’ fellow British rookie George Russell’s Williams team are starting to feel the effects of a distinct lack of spare parts, particularly after the wall at the castle section in Baku fancied Robert Kubica’s front wing for lunch, before then claiming Charles Leclerc’s Ferrari for dessert. However, the higher dependability on the driver in Spain than we have seen in the opening rounds might provide an opportunity for one of the two drivers to lift themselves off the bottom of the order – wishful thinking of course, but Williams have never been a team to give up, as history definitively and adamantly tells us.

This is a big weekend then for Ferrari. This weekend will see the first of the season for significant upgrades to cars as we enter the European leg of the season, and failure to win here will be another significant and compounding blow for Ferrari in their ever-incrementing challenge to beat Mercedes.

The champions, on the other, hand, will see this as a golden opportunity to put more breathing space between them and their Italian rivals and win an astonishing sixth consecutive Drivers’ and Constructors’ Championship.

And of course let’s not forget Valtteri Bottas, with his go-faster beard, looks to extend his championship lead over team mate Lewis Hamilton in what is starting to look like a fascinating battle between the two – he certainly hasn’t been a side-kick so far this year.

The Spanish Grand Prix hasn’t always been the most exciting, and subsequently not the most anticipated race, but this weekend means a lot for our championship protagonists.