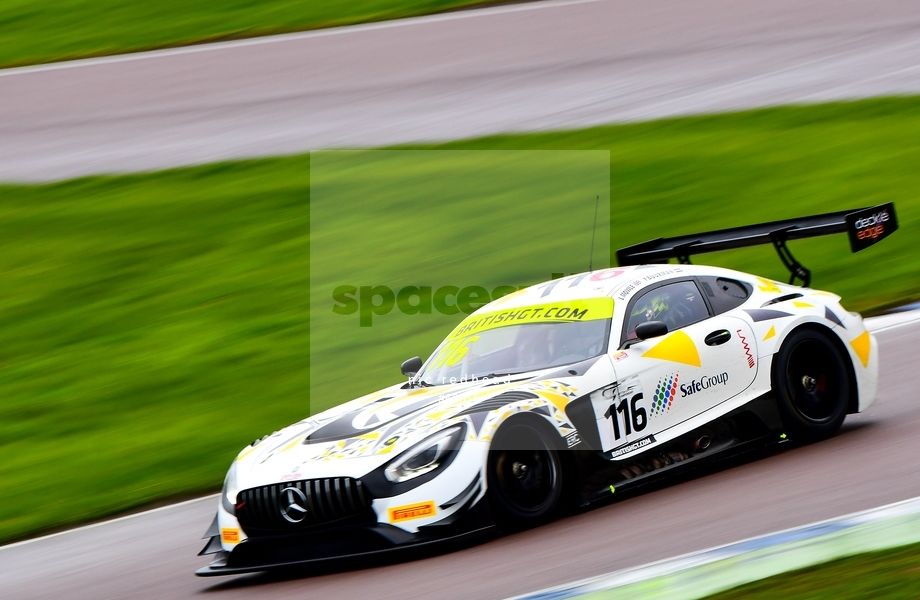 Yelmer Buurman’s stunning recovery earned the #116 ERC Sport team victory in Round Three of the British GT Championship ahead of the #17 Aston Martin team piloted by Derek Johnston and Marco Sorensen and the #7 Bentley duo of Callum Macleod and Ian Loggie, although #17 team would later receive a 30s penalty to drop them back to seventh. Darren Turner and Andrew Howard in the #99 Beechdean Aston Martin  inherited the podium.

Callum Pointon and Patrik Matthiesen were top of the GT4 class in the #55 Ginetta with Jesse Anttila and Stephen Johansen second in the #54 Nissan 370Z and Will Moore and Matt Nicoll-Jones’ Aston Martin Vantage #62.

John Minshaw had initially looked like building up the 20s gap that the #33 Barwell Motorsport needed, the gap as high as five seconds ahead of Flick Haigh’s #75 Aston Martin, who eventually lost out to Sam De Haan’s  #69 Lamborghini before the race’s first Safety Car, triggered by Shaun Balfe’s McLaren GT3 entry hitting the wall after contact with an Invictus Jaguar in GT4.

Minshaw again stretched his lead and was again pegged back through no fault of his own as he lost a 9.5 second advantage to a second Safety Car, and was reeled in by Graham Davidson in the #47 Jetstream Aston Martin, who had quietly worked his way up as others hit strife.

Once the handovers were complete during the pit stop window, Phil Keen in the #33 was 15s behind Maxime Martin in #47 after serving the 20s success penalty, but this deficit was closed after a third Safety Car thrown to recover the stricken #22 Invictus Racing Jaguar driven by Ben Norfolk at the Deene Hairpin.

Martin was then penalised for exceeding track limits but Keen was passed by the charging Buurman before himself receiving a penalty, after the #75 Optimum  Aston Martin hit gremlins in the pits while the #69 Barwell Lamborghini failed to leave the pits altogether.

Buurman had a clear run to the flag after that with Macleod and Turner quietly guiding their Bentley and Aston Martin to the GT3 podium. Adam in the #75 Aston was classified fourth, Keen recovered to sixth behind Davidson and Martin, while Rick Parfitt Jnr and Ryan Ratcliffe endured an awful race after strong early pace was hampered when Johnston spun Parfitt Jnr’s Bentley.

In GT4, Callum Pointon was able to cruise home in his #55 HHC Ginetta after teammate Patrik Matthiesen had hounded the #4 Tolman McLaren of Charlie Fagg throughout the first hour of the race.

While Fagg pitted early in the window, Matthiesen stayed out an extra ten minutes and the Ginetta leapfrogged the McLaren now driven by Michael O’Brien, who quickly fell behind.

O’Brien was to prove a mobile roadblock for much of the second hour, before succumbing to the advances of a fast charging Jesse Anttila in the #54 UltraTek Nissan – Anttila and Stephen Johansen winning the GT4 Pro-Am class in the process.

Matt Nicoll-Jones took third in the #62 Academy Motorsport Aston Martin also piloted by Will Moore after passing O’Brien and the #10 Equipe Verschuur McLaren driven by Dan McKay and Finlay Hutchison, with the #53 UltraTek Nissan of Kelvin Fletcher and Martin Plowman was fourth in GT4.