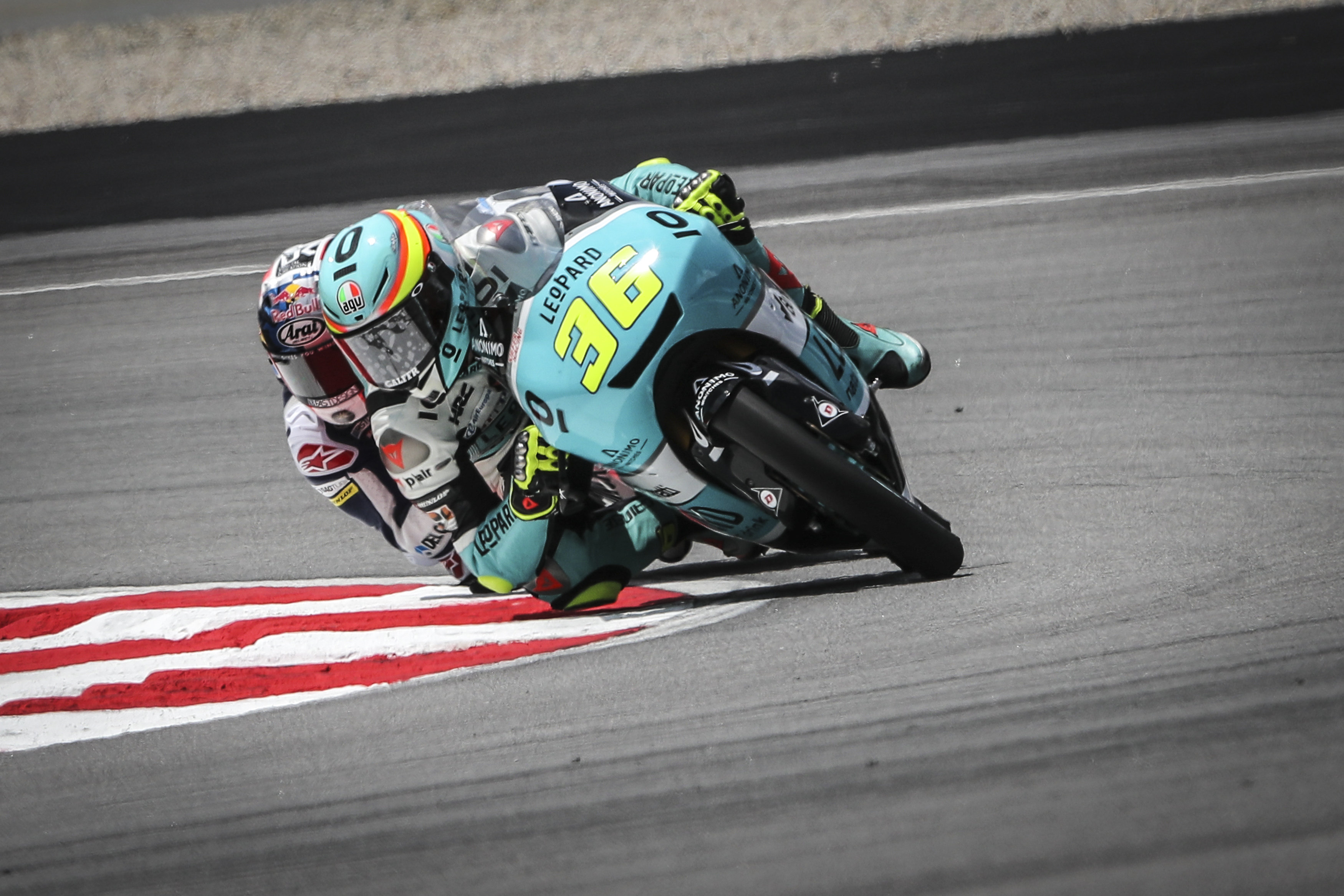 Newly crowned Moto3 champion Joan Mir backed up his victory and from Phillip Island with another sensational display at Sepang, taking the win after he caught and passed early pace-setter, Jorge Martin. Martin – yet to win a race – finished second, fractionally ahead of Enea Bastianini, after the two had a battle. Bastianini was just 0.039 behind the pole-master over the line to round off the rostrum. Mir now has 11 wins in Moto3, 10 of which have come this year. If he wins in Valencia, he will equal Valentino Rossi’s record of 11 in a season, set back in 1997. Mir is the first rider to win ten races in a year in the lightweight category since Marc Marquez in 2010.

It was Jorge Martin who got the hole-shot from second on the grid; the Spaniard not wasting tines as he bolted into the lead early on, having half a second on everyone by turn 4. It seemed it could be a done deal as he had broken the slipstream of his pursuers but Mir was soon on the Spaniard’s case, as he gave chase to his fellow countryman.

The new Champion reeled in his compatriot and sliced past as soon as he was able to, into turn 9, an overtaking hotspot at Sepang. Despite his superior pace to close to Martin, he didn’t pull away like we thought he would. Bastianini was then able to catch both run-away Spaniards and the three were together on track until a moment between Bastianini and Martin allowed Mir to run free.

Mir was then able to hold onto it and leave the pair behind to tussle it out for the final spots on the podium, with that decided at the final corner in favour of Martin.

Livio Loi put in another great ride after coming back from a broken collarbone earlier in the season. The Belgian had a lonely ride to fourth but demonstrated to doubters and critics that he belongs in the class. He was ahead of an incredible battle for fifth which was won by John McPhee. He made his move late to take the place without allowing his competitors to fight back, crossing the line in P5 ahead of a late-charging Andrea Migno

Romano Fenati fought back and took seventh ahead of his rival for second in the standings, Aron Canet. The result meaning that Fenati is runner up in 2017. Fabio Di Giannantonio was able to improve to ninth, with Dutchman Bo Bendsneyder completing the top ten.

Adam Norrodin had an eventful home race as he was running 4th before a small crash at turn one. Despite the cries from the crowd, Norrodin was back on in no time and was initially fourteenth. By the end of the race, the Malaysian was able to take eleventh and just keep rookie teammate Ayumu Sasaki behind him at the line – but it was a great double points finish and a highly positive home weekend for the Sepang International Circuit Racing Team, as the outfit moves into Moto2 in 2018 with Hafizh Syahrin.

Tatsuki Suzuki had a huge high-side crash at turn 15 on lap one. He was joined by Darryn Binder and Niccolo Antonelli in the turn 15 tea-party club.