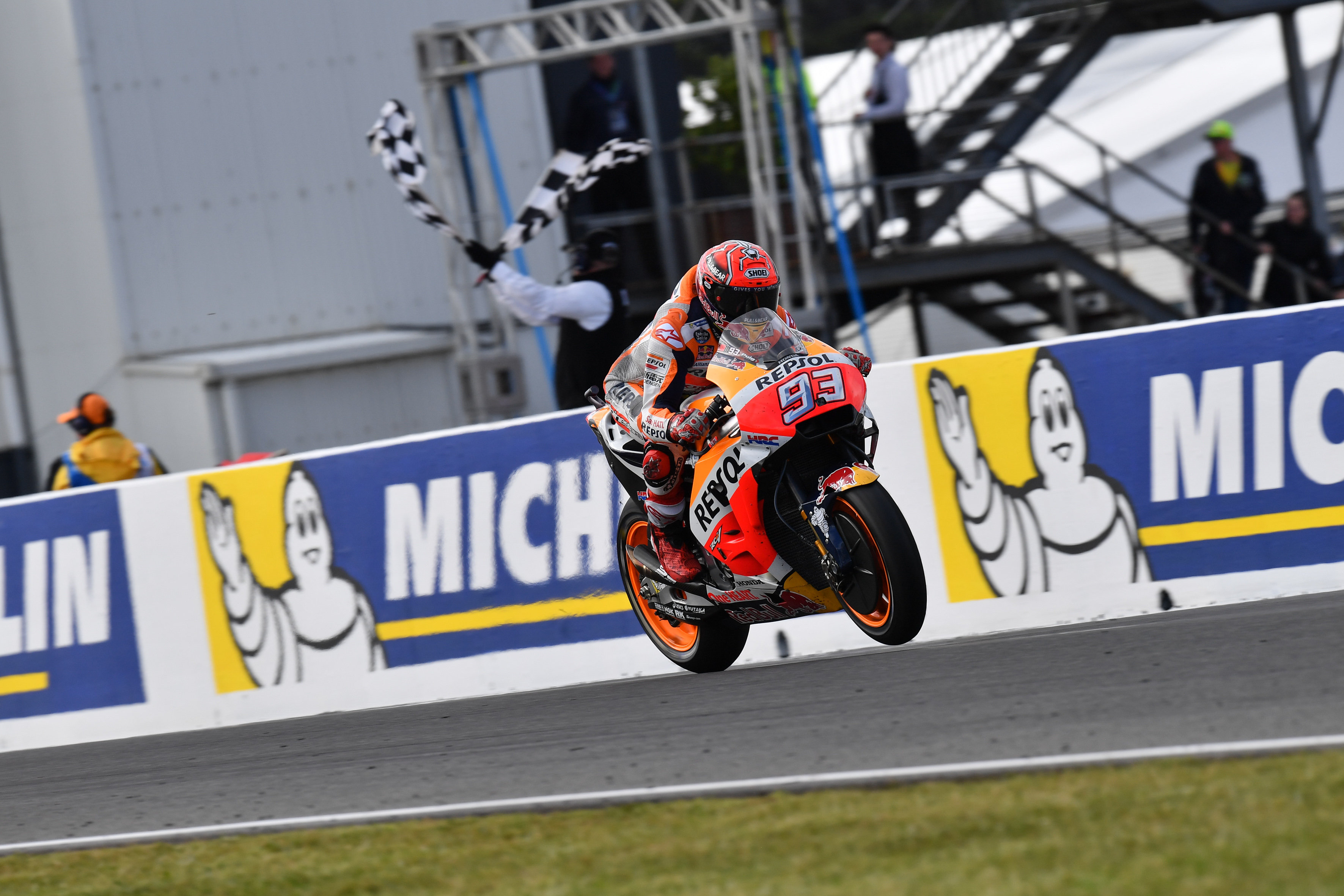 Marc Marquez took his sixth win of the year and his second ever in Australia after a frantic Phillip Island race on Sunday. The Spaniard broke clear of an eight-man scrap for the win in the final laps to take to the top step of the rostrum. It was a disastrous race for title rival Andrea Dovizioso, as the Italian suffered an early run off and was only able to fight back to 13th. It leaves Marquez now 33 points ahead in the points table. Valentino Rossi took second – his first podium since Silverstone – as he came out on top of the fight for the podium, with teammate Maverick Viñales taking third. Viñales is now out of the Championship fight, 50 points back with two rounds to go. Two wins for Vinales and two DNFs for Marquez would not be enough for the Yamaha man to take the crown, as he would only draw level on points. Marquez would win on count back of victories.

It was Marquez who got the initial lead into turn one, however he couldn’t retain it into The Southern Loop as a sensational start from Jack Miller from the middle of row two saw the home-hero carve his way through into the lead before pulling the pin and bolting off at the front. Viñales was the man in third on the charge, as he tried to keep his title hopes alive. As an incredible first lap concluded, the next big drama was into Doohan’s at the start of lap two, when Dovizioso and whole host of other riders went wide, leaving the Italian down in 20th.

A huge chain of eight riders closed in on Miller in the lead. Rossi and Viñales were the first to get through, straddling the Marc VDS Honda on both sides down the Gardner Straight. A lead group of Marquez, Viñales, Rossi, Andrea Iannone and Johann Zarco began to fight it out. The group was cut down to seven riders in the chasing pack, as Aleix Espargaro crashed out at turn 1, putting him out of the race and also, out of the forthcoming Malaysian GP.

Here were just some of the battles: Marquez vs Rossi, Zarco vs Rossi, Viñales vs Marquez, Iannone vs Zarco…in one of the most aggressive and hard-fought battles of the century, the passes came thick and fast, each, just as aggressive as the previous.

Zarco was one of the most flamboyant and outstanding. After tagging the rear of Marquez at Honda hairpin, he forced Valentino Rossi out wide at the exact same corner. A few laps later, the Tech 3 Yamaha man powered around the outside of Maverick Vinales at Doohan’d, a 140mph sweeping first corner. Zarco continued to show his front wheel, going side-by-side with Valentino Rossi and leaving rubber marks on the Italian as they went through the Hayshed corner, on the charge up Lukey Heights. Valentino was also run wide by arch-rival Marc Marquez, as the two contacted on the exit of The Southern Loop, costing Rossi another place as Iannone passed him too.

Once Marquez was in the lead, however, the reigning champion was able to start pulling a gap with five laps to go. As the battle for 2nd raged on behind, the Repsol Honda rider began to sprint off, leaving the fight to get on the podium to three riders on the final laps: Rossi vs Viñales vs Zarco.

With some of the craziest and most desperate lines ever ridden around ‘The Island’, ‘The Doctor’ was able to win the scrap for 2nd. However, all three were neck and neck over the line. Over the line behind the nine-time world champion, it was Viñales just edging ahead of the Tech 3 of Zarco, taking third for a return to the podium but a concrete end to his chance of the title. Zarco’s fourth, however, confirmed him as Rookie of the Year, despite it not justifying the hardcore racing he displayed.

After Iannone got pushed back in the closing stages, Cal Crutchlow took fifth ahead of ‘The Maniac’, with early race leader Miller, rookie Alex Rins and both of the Red Bull KTMs completing the top ten; Pol Espargaro just pipping Bradley Smith. Dovizioso suffered late on after losing out in a drag to the line with both Scott Redding and Dani Pedrosa. Redding in turn was the top Ducati. Behind Dovi was Karel Abraham and fellow Ducati rider, Jorge Lorenzo, completing the top fifteen, compounding a terrible weekend for the Italian marque.

Sepang and Malaysia now beckon for the GP circus. Will we see another thriller to top off what have been some of the best ever fly-away Grand Prix in recent memory?