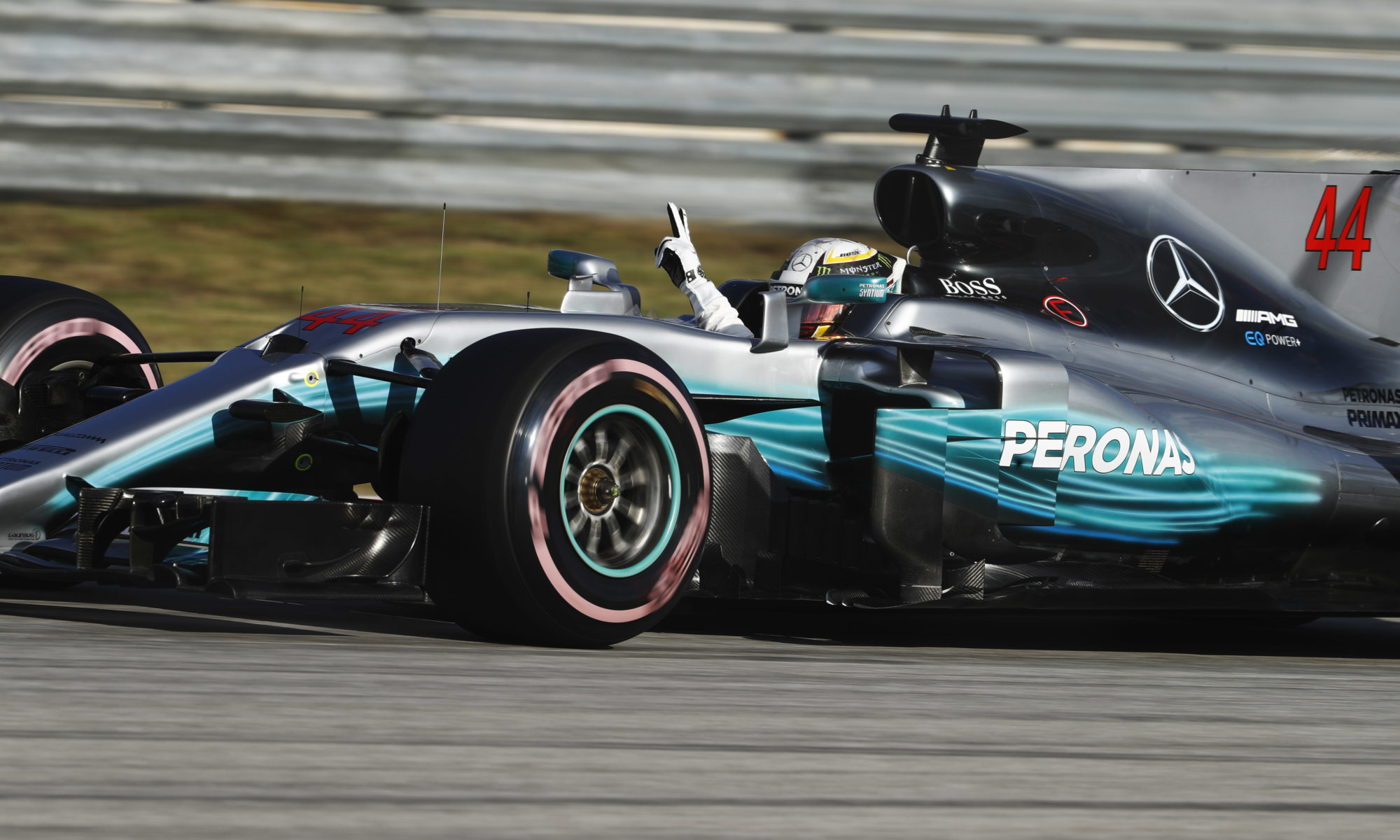 The word of the day for qualifying is ‘pace’. Lewis Hamilton wasn’t content to rest on the track record he set in P3, and went on to set new course records several times during qualifying as well as the record for front-row starts. Ferrari looks like it might be able to breathe some life into the Drivers Championship again.

Red Bull continues to nip at Mercedes and Ferrari’s heels – they may not realistically be able to unseat Ferrari for second place in the Constructors Championship, but they sure can play the spoiler in the Drivers Championship (well, but for those pesky penalties). Force India continues to dominate fellow Mercedes customer team Williams, and Fernando Alonso keeps wringing impossible results out of the Honda power unit, aided by McLaren’s excellent chassis and a few upgrades that his teammate doesn’t have.

Renault keeps showing hints of their future potential, while Toro Rosso is floundering a little due to driver availability issues. Haas is continuing their sophomore slump, and we’re all carrying a torch for Sauber, hoping that next year’s improved power unit and stabilization in the organization will bring them back to competitiveness.

Q1
Most of the field took to the track on the pink ultrasoft tyres, while Mercedes and Ferrari elected to use softs. The backmarkers opened the session with Pascal Weherlein setting a decent pace for Sauber. Unfortunately, but predictably, he was quicly eclipsed by cars with more capable power units. Next year, Sauber! Next year!

The leaderboard underwent its usual early churn, with Valtteri Bottas, Esteban Ocon, Max Verstappen, and others – seemingly half the field – taking turns in P1. Fernando Alonso even briefly held P2 before everyone began to find their pace and the more dominant cars rose to the top. Valtteri Bottas set the pace for the first half of the session, with a lap of 1:35.309.

Lewis Hamilton’s early laps were somewhat lackluster while he found his pace, placing him in 7th with a 1:36.425. Hamilton wasn’t the only one appearing a bit sluggish, with Verstappen running into traffic, Daniel Ricciardo sliding around a bit, and the Ferraris split by Felipe Massa.

The middle of the session featured some excitement of the negative kind. Haas found themselves in the interesting position of being on both sides of impeding investigations. Romain Grosjean found himself off cutting the grass when forced to swerve wide to avoid Lance Stroll’s Williams. Stroll was seemingly living up to his name (he was in fact being coached through a setting change at the time; perhaps not the wisest time and place to do so) while Grosjean was coming up quickly behind. Grosjean moved to pass on the right, but Stroll abruptly moved further to the right himself, sending the Haas driver out onto the grass. Stroll was awarded a three-place penalty for his efforts, and his very first penalty point for his license. Not exactly the kind of first a driver wants, but into every life a little rain must fall.

On the other side of the coin, Kevin Magnussen found himself under investigation for impeding Sergio Perez. Due to a miscommunication with the pit wall he slowed at turn 11, unaware that Perez was approaching quickly on a flying lap. Perez was forced to slow abruptly to avoid contact. Driver and team both owned up to the error, and Magnussen was handed a three-place grid penalty and a penalty point on his license as a result.

At the midpoint of the session the timing sheet was thoroughly mixed. It was at this point that Lewis Hamilton came alive, turning in a lap almost as quick as his record-setting lap in P3 and putting himself firmly atop the timing sheet with 1:34.822.

As is often the case, the closing minutes of the session featured spirited efforts by those lower in the order attempting to secure a place in Q2. Carlos Sainz catapulted his Renault into 5th, while Hartley found himself edged below the cutoff despite a spirited drive, being outpaced by Stroll and Sauber’s Marcus Ericsson. Grosjean barely made it through for Haas – his 15th place 1:36.835 being only .007 quicker than Ericsson’s 1:36.842 for 16th.

Q2
Q2 opened with a notable absence. Nico Hulkenberg elected not to run due to his 20-place grid penalty despite having placed in 9th in Q1, 0.15 seconds ahead of the Force India driven by Esteban Ocon. While perhaps understandable from a race strategy perspective, this proved to be a disappointment to commentators and fans alike.

Everyone but Max Verstappen elected to run Q2 on ultrasofts, while Verstappen opted for the soft tyres.

Unlike in Q1, Lewis Hamilton put his best foot forward for Q2. Initially dueling for fastest sectors with his teammate Valtteri Bottas, Hamilton set a seemingly-unassailable time of 1:33.560, setting a new track record once again. Bottas turned in a respectable time of 1:33.793.

Sebastian Vettel rounded out the top 3, being 0.829 seconds behind Hamilton. Daniel Ricciardo made his way to 4th, .935 behind Hamilton. Kimi Raikkonen, despite always looking very quick (red ones go faster, right?) found himself in 5th in the first half. Verstappen, on the soft tyres, was in an unexciting 6th.

The Force India duo of Esteban Ocon and Sergio Perez were in 7th and 8th place going into the Q2 lull, and Carlos Sainz found himself in 9th. Felipe Massa rounded out the top 10.

Both McLarens found themselves in the drop zone, along with Romain Grosjean and Dany Kvyat as the teams regrouped for the final Q2 push.

When the action resumed in the dying minutes of the session, Kvyat was first to take to the track in his Toro Rosso. Other teams followed suit with the exception of Red Bull, who elected to keep Ricciardo and Verstappen in the pits. Wary of Ferrari, Mercedes elected to send Hamilton and Bottas out, while both Vettel and Raikkonen took to the track in an attempt to unseat the Mercedes duo.

As the chequered flag descended, drivers on track began to finish their flying laps. Kvyat was first to complete his session, and while he improved his time he wasn’t able to crack the top 10, finishing in 12th. Grosjean was next, and found found himself in 14th. While he also improved his time it wasn’t enough to improve his position.

Lewis Hamilton’s seemingly unassailable lap time was then beaten – by Hamilton himself. Hamilton once again set the record for fastest lap, with a blistering 1:33.437.

Fernando Alonso delivered a significant improvement to his time bringing him to 7th, pushing Ocon down to 8th. Ocon then crossed the line, improving his time, but not his position. Vandoorne was next across the line, echoing the refrain of improving his time he was unable to improve his position, finishing the session in 13th between Kvyat and Grosjean. Bottas in turn crossed the line in 2nd place, a full third of a second behind Hamilton.

Felipe Massa the pulled himself up out of the drop zone, splitting the Force India duo and crossing the line into 9th, pushing Carlos Sainz into the drop zone and leaving Perez in 10th. Vettel meanwhile crossed the line 0.666 (spooky!) seconds behind Hamilton, but was then pipped for third by Raikkonen, in turn pushing Ricciardo into 5th.

Sainz brought his Renault across the line with a significantly improved time, propelling himself into 7th while leaving Massa in 10th and Perez in the drop zone. Perez, the last man on track, finished the session by beating Sainz to 7th and pushing Massa back into 11th.

Q3
Lewis Hamilton led the charge into Q3, followed by Valtteri Bottas, and they quickly began trading fastest sector times. In short order all the others save Carlos Sainz were on track.

Echoing his performance in Q2, Hamilton yet again set a course record. His time, 1:33.108.

Daniel Ricciardo then brought his Red Bull into third, with 1:34.130, but was eclipsed by his teammate, with Max Verstappen setting a time of 1:33.868.

Hot on Verstappen’s heels, Sebastian Vettel crossed the line with a time of 1:33.867, occupying third and squeezing Max into 4th by the narrowest of margins. Sergio Perez delivered a slower 1:35.167 for 8th place.

Kimi Raikkonen then crossed the line, pushing Vettel out of third with a time of 1:33.852 before the drivers began to filter back into pit lane to prepare for the final push. clearly felt his performance in the first half of Q3 wasn’t up to par, commenting, “S**t. Too many mistakes,” when told he was in P3.

Meanwhile, Sainz had yet to set a time. He was the first to head out onto the track in the final minutes of the session.

As with Q2, the teams released their boys onto the track with just enough time to complete the out lap and begin a flying lap before the chequered flag fell.

Vettel then found his pace, though he was unable to top Hamilton’s record-setting time. His time of 1:33.347 was sufficient for him to move up the ranking to second. Across the world, fans rejoiced at the prospect of the title fight remaining alive.

Ricciardo improved his time a bit, provisionally holding onto fourth place with a time of 1:33.577, followed closely by his teammate who set a provisional fifth place time of 1:33.658.

It wasn’t to last, though, as Raikkonen split the Red Bulls with a time of 1:33.577, matching Ricciardo. As Ricciardo was the first to post the time, he remained in fourth and Raikkonen moved to fifth.

Despite setting a fast first sector time in his late push, Hamilton was unable to venture into 1:32 territory. Perhaps his engineering team forgot to refill the cheetah blood tank in their excitement.

Bottas was similarly unable to improve his time and remained in third place, while Perez remained in tenth despite improving his time slightly to 1:35.148.

But of course, there are penalties to account for. Stoffel Vandoorne incurred a 5-spot drop, Max Verstappen had 15, Nico Hulkenberg received a 20-spot penalty, and Brendan Hartley, for reasons that technically make sense but still manage to seem mystifying, faced a 25-spot penalty.