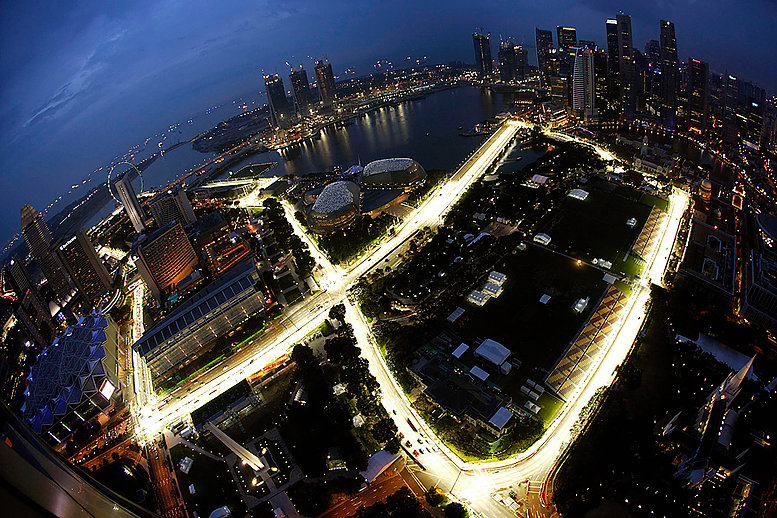 After a dominant Mercedes win on Ferrari’s home turf at Monza that saw Lewis Hamilton gain the Drivers Championship lead by 3 points, the Formula One world packs its bags for the flyaway races that finish out the season. Next up on the calendar is the dramatic night race in Singapore, taking over the center of the Lion City for possibly the final time. Will we see any major upsets? Who or what will intrude on the track this year?

Unsurprisingly, the ultrasoft compound constitutes the majority of the tyres selected for the weekend. Most drivers will have 10 sets of ultrasofts, though there’s a good mix of supersofts as well. Haas is the outlier here, with both Grosjean and Magnussen opting for 4 sets of supersofts, 1 set of softs, and only 8 sets of ultrasofts.

We may as well begin with McLaren, as they’re already on everyone’s minds. Though official confirmation is to come later in the week, it’s an open secret that McLaren and Honda are splitting up, with Toro Rosso picking up the Honda engine supply and McLaren picking up Renault power, and Renault picking up Carlos Sainz in the midst of this engine-based musical chairs. Alonso will stay at McLaren, and everyone’s happy except probably Jolyon Palmer, who will lose his seat barring a miracle.

In actual McLaren RACE news, Alonso expects some points in Singapore. As it’s a lower-speed circuit McLaren may well be able to hold a good position provided they don’t have to tax the Honda power units too much.

Mercedes will be keen to work hard to consolidate Lewis’ hairs-breadth 3-point lead in the Drivers Championship as well as shore up their 62-point lead in the Constructors Championship. Bottas, his race seat secure with Mercedes for 2018, has indicated that if he’s in P2 behind Hamilton he’ll gladly help the team out rather ‘than try something silly’. On the media front, this being Mercedes, Toto Wolff is busily talking up Ferrari and Red Bull’s chances. Niki Lauda’s also sanguine on Ferrari. How much of this is genuine concern and how much is the typical Mercedes under-promising remains to be seen, though Ferrari have mounted a substantial challenge to Mercedes this season, and Red Bull providing some surprises of their own.

Ferrari will certainly be keen to work their magic to take the Drivers Championship lead back and take a nice chunk out of the Sliver Arrows’ Constructors Championship lead. As they’ve done well at low-speed circuits this year and Vettel has won at Singapore twice as many times as Hamilton, Ferrari pose a real threat to Mercedes, though it remains to be seen if Kimi Raikkonen is as keen to be a team player as his fellow Finn Bottas. Though they may stop short of actual team orders, Ferrari would be foolish to not heavily favor Vettel in Singapore.

After strategic grid penalties overshadowing the Bulls’ stellar qualifying performance in the wet at Monza, and an unfortunate early incident putting Max Verstappen on the back foot, the Bulls are optimistic that Singapore presents the best chance of a win at this stage of the season. As they’ve historically done well on lower-speed, higher-downforce circuits, this isn’t a vain hope provided they can avoid further grid penalties. Good results at Singapore won’t hurt their driver morale either, as both Ricciardo and Verstappen desire a winning car.

Coming fresh off a double-points finish that happily featured no on-track fisticuffs between their drivers, Force India brings upgrades to Singapore. They’ll doubtless be keen to keep Perez and Ocon well in hand, and look to extend their 58-point lead over Williams in the Constructors Champtionship, further consolidating their fourth place standing.

Williams, meanwhile, is focusing on a strong finish to the season. Their gap to Force India isn’t insurmountable, but with only 7 races left including Singapore they need to raise their performance game with immediate effect. As they’ve struggled to make the most of the FW40 all season, it’s likely they’ll remain solidly in the middle of the field.

Toro Rosso, only 15 points behind Williams, should turn in a respectable performance at Singapore barring on-track incidents or unforeseen grid penalties.

Haas, meanwhile, are confident that their good aerodynamic efficiency with high-downforce configurations will pay off, so long as they can stay in the tyre window.

Regarding Renault, they’re expecting a better performance in Singapore due to the higher downforce levels at Singapore. Meanwhile, if Nico Hülkenberg doesn’t claim a podium finish he’ll set the unenviable record for most Grand Prix stars without podium finishes. He’s currently tied with Adrian Sutil at 128, and Singapore will make 129. Palmer, meanwhile, desperately needs to find performance, with his F1 future now almost certainly at stake.

Sauber faces what may be their final chance of this season to get ahead of McLaren. They’ve done heroic work with year-old power units and the upsets in management, but it’s a long shot.