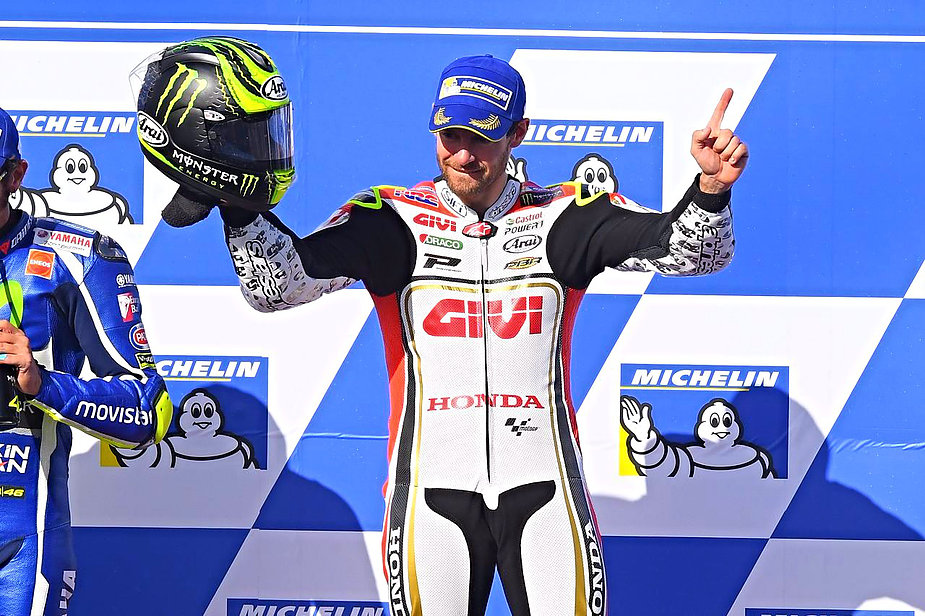 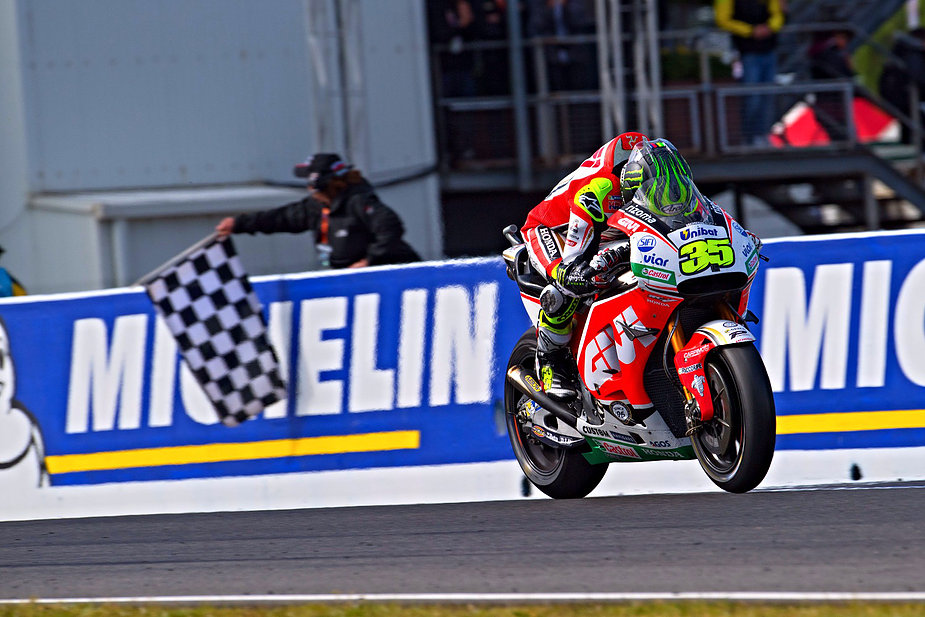 The fry up. The scone. The pint of Marston’s Pedigree. The British Bulldog. And now, Cal Crutchlow. These things are synonymous with the British way of life, and now that Cal Crutchlow has become a winner for a 2nd time, it’s hard to ignore the fact that, he is one of the most talented sportsman in Great Britain. I suppose it’s like waiting for a bus, you wait ages and two come along at once; exactly what has happened in terms of waiting for a top class British winner.

“The Honeybadger” joined MotoGP in 2011, securing rookie of the year and a best finish of 4th at the final race of the year in Valencia. He came to MotoGP after winning multiple times in World Superbike, and although he had options to stay and be world champ, he acknowledged that he’d have to make the jump to a series on the up instead of stay in a championship in a spiral of decline.

It wasn’t obvious at first that Cal was in his natural habitat. Many people had thought he was just “another Brit”. The token British rider, there to purely keep interest in the sport over here in Blighty. So many people had tried and failed to become anything in MotoGP. James Toseland, the former double WSBK champion, couldn’t make it happen at premier level. Jeremy McWilliams, great on the 250s, but never allowing potential to fulfil in the premier class. Neil Hodgson was yet another one who was never given the opportunity. Shane Byrne on the Aprilia and on the KTM, not to mention James Ellison on the WCM and PBM ART machine. Yes, us Brits endured a torrid time, but then came along our saviour, our hero, our Cal.

2012 was a much better year for Cal. He battled with Tech 3 teammate Andrea Dovizioso all year, winning most of the scraps he had with the Italian. At the Spanish Grand Prix, Jerez, Crutchlow finished 4th, just 2.4 seconds off the win and half a second off his first podium. Eyebrows were being raised over here. Surely he wouldn’t be able to mount the podium on a Satellite Yamaha? In true Cal Crutchlow style, he went and proved the doubters wrong, taking a third place at Brno! The Brits were back, as Scott Redding was on the up in Moto2, as was Bradley Smith. Danny Kent was racing through the ranks too, having an incredible year in Moto3. Crutchlow rounded out the season with a podium at Phillip Island, finishing the season 7th.

2013 would prove to be even better! For the first five races, he wasn’t outside of the top 5. A crash in Catalunya whilst with the leading quartet blotted his copy book, but he fought back with a stunning 3rd in Assen, almost beating eventual champion Marquez in a last lap scrap, as well as taking 2nd at the Sachsenring, where he would have to beat Valentino Rossi, who was on the Factory Spec bike. British fans were daring to dream of a win, but then Cal made the decision to move to the Factory Ducati team.

The dreams suddenly ended. The energy has suddenly subsided. It was all very sudden indeed. The bike that had ruined the careers of Marco Melandri, Nicky Hayden and to an extent, Loris Capirossi. The bike that not even The Doctor of Rossi could cure. Crutchlow was taking a huge risk, but only one man knew that he would make it work, and that was Cal himself.

Re-joining old sparring partner Dovizioso at Ducati, Cal had a decent first outing, with 6th in the Qatari Desert. This was better than Valentino’s 2011 debut. However, a massive crash at COTA meant Crutchlow’s season was effectively over before it began. After 7 races, Cal had finished two of them, and now us Brits were once again thinking it was yet another talent squandered. A shock podium at Aragon in the rain was the only time Cal would stand back on the box. Despite running an impressive 2nd at Phillip Island, he crashed out on the final lap, due to a sudden drop in track temperature. The season was a season to forget, and maybe having a factory bike wasn’t everything it was cracked up to be. Another year we had to wait for a win then.

Cal went back to a satellite team in 2015, with the LCR team, replacing Stefan Bradl. Crutchlow took a thrilling podium away from Andrea Iannone at Argentina, nicking it on the final flick left to seal the deal and beat the rider who replaced him on the Bologna Bullet. It would prove to be his only podium of the year but it was a sign that Cal was back. Cal could be the rider he was back in his Tech 3 Yamaha days.

2016 started off the worst way possible. After three races, the Coventry rider wasn’t carrying on his form, but instead, he was propping up the series table, as he was rock bottom. Things got better for him at Catalunya, as he took a 6th, but then, the ball started rolling. A simply stunning 2nd position in Germany emphasised and reminded us all that the name “Crutchlow” was still a formidable force.

It would be the Czech Grand Prix however where the wait would finally end. Having been languishing down in 13th for most of the race, the harder option tyre came to Cal as the softer option went away for the front runners. He and Valentino stormed through the field, but the Brit was the one to prevail. On the back wheel in a way only Cal could, he took his first win. 35 years of drought had been ended by number 35 himself. Silverstone was next, and from pole position, Crutchlow took a 2nd place in front of thousands of home fans willing him on. The season was just unbelievably successful.

Then, along came the Australian Grand Prix. Starting from the front row, Crutchlow made an appalling get away, but he made up for it and soon he was 2nd. At Honda hairpin, the camera panned, and it was an orange flash flying through the Australian dirt. Marc Marquez, the champion, the race leader, had crashed out in dramatic fashion. This left Cal Crutchlow with a mammoth task of keeping hold of the lead for the remainder of the race against the fiercest competitor of all time, Valentino Rossi. But, not even Valentino could do anything about the run-away Brit this time. Crutchlow became the first ever British winner of an Australian Grand Prix across all the classes. He had done it in the wet at Brno, but now, he had done it in the dry of Australia.

Crutchlow has reaffirmed his position as one of the finest riders in MotoGP. Now, he is a double winner. He is one of only a handful of riders to win a WSBK race and MotoGP race. He has taken us through good times, seen us through the bad times, and at last, ended the drought of waiting for a British winner. A character loved by everyone in the paddock, can now say that he’s a double Grand Prix winner. His name can go next to Barry Sheene’s in the record books. Against the odds, doubters and adversity, Cal is arguably the first homegrown Brit who has gone through the national series, to World level and then to the Premier class. Not only to do it, but to make it work at each stage. He is a legend. Our Cal, Britain’s saviour. Britain’s favourite.