Remy Gardner dominated the 8th round of Moto2 at the Sachsenring in Germany to take third win in a row, increasing his lead at the top of the championship.

Heading into the weekend, Gardner on 139 points was only 11 points ahead of his teammate Raul Fernandez, with Italian Marco Bezzecchi 3rd on 101, and Britain’s Sam Lowes 4th on 75.

The Sachsenring, at 2.28 miles, is a tight, twisty track, and the focus for the weekend was on tyre preservation. High temperatures on Friday and Saturday, with a slightly cooler temperature on race day also added to the tension, with the whole field on a hard compound on the front and a soft rear.

A blistering lap time of 1:23.397 in Q2 earned Raul Fernandez pole, pushing Di Giannantonio into 2nd, with Remy Gardner completing the front row. After a crash in Q2, Britain’s Sam Lowes started on the 3rd row of the grid in 7th place.

Fernandez took the lead off the line, closely followed by Gardner. Di Giannantonio dropped back into 6th, and Xavi Vierge moved up from 5th on grid up into 3rd.

The opening laps seemed to be shaping up to be another battle between Fernandez and Gardner, as the two Ajo KTMs pulled away from the rest of the field, with a half second gap opening up behind them to Vierge.

On lap two, Gardner passed his teammate and took the lead, as Sam Lowes dropped back into 14th.

Gardner settled into a rhythm putting in faster lap times, with Raul Fernandez pushing hard to stay on his tail, but on Lap 5 the rookie showed his lack of experience and lost the front end at turn 3, sliding into the gravel and out of the race.

Spain’s Aron Canet, who started 10th on the grid, had worked his way up through the field and now moved up to second, starting to pull away from Bezzecchi.

Gardner, riding a lonely race, gradually stretched out his lead to 5 seconds ahead of Canet with Bezzecchi in 3rd.

On lap 21 Lowes moved up into 8th place, meanwhile Bezzecchi & Di Giannantonio swapped places in a battle for 3rd, with Bezzecchi eventually making it stick.

Gardner extended his lead to 6.5 secs over 2nd place Canet, who in turn was over 2 seconds ahead of Bezzecchi.

On lap 26 Honda Team Asia rookie Ai Ogura passed Xavi Vierge to move up into 5th, and both Ogura and Bezzecchi started to close in on Canet.

The last lap brought yet more surprises, with Vierge, running in 6th, crashing out on turn 1, followed by Joe Roberts at the same corner, and Ai Ogura out on turn 8. Gardner crossed the line comfortably ahead of Canet who held onto 2nd, with Bezzecchi in 3rd. Di Giannantonio claimed 4th, and after the incidents on the last lap Sam Lowes moved up to take 5th.

The gap at the top of the championship has now widened, with Gardner going into the next round at Assen 36 points clear of teammate Fernandez, who is now only 11 points ahead of Bezzecchi. Can Fernandez pull something out of the bag at the Dutch TT, or will Gardner make it four in a row and further increase his lead?

All eyes were on the weather this weekend at Le Mans, with the 2.6 mile Bugatti circuit plagued by changeable conditions during qualifying. Saturday saw plenty of yellow flags, with damp patches catching out many. However, the weather improved enough overnight for Sunday to be declared a dry race. 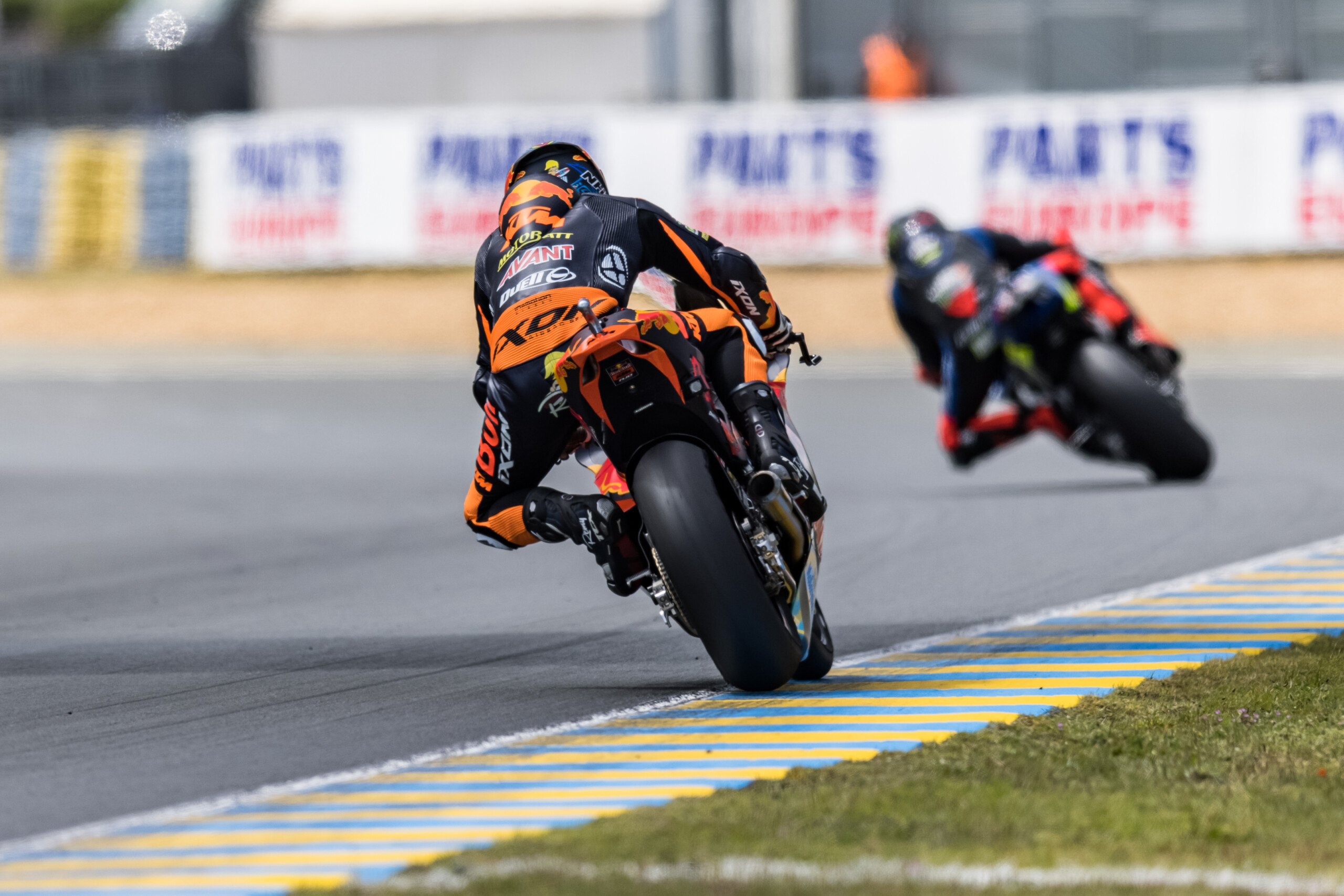 At the start of the weekend only 6 points separated the top 3 in the championship, with Remy Gardner leading on 69 points, and Sam Lowes second with 66. Raul Fernandez, in his rookie season in Moto2, rounded out the top 3 on 63 points, after gaining victory in the third race of the season in Portugal.

Lowes went into the weekend having won the first two races of the season, at Qatar and Doha, and race 4 in Spain saw Fabio Di Giannantonio on the top step of the podium.

Another one to watch this weekend was the Brit Jake Dixon, who came so close to winning at Le Mans last year only to crash out four laps from the finish.

Bezzecchi, whose fastest lap was only 0.240 behind Fernandez, lined up second on the grid, and third was Joe Roberts, who had started from pole at Le Mans in 2020. 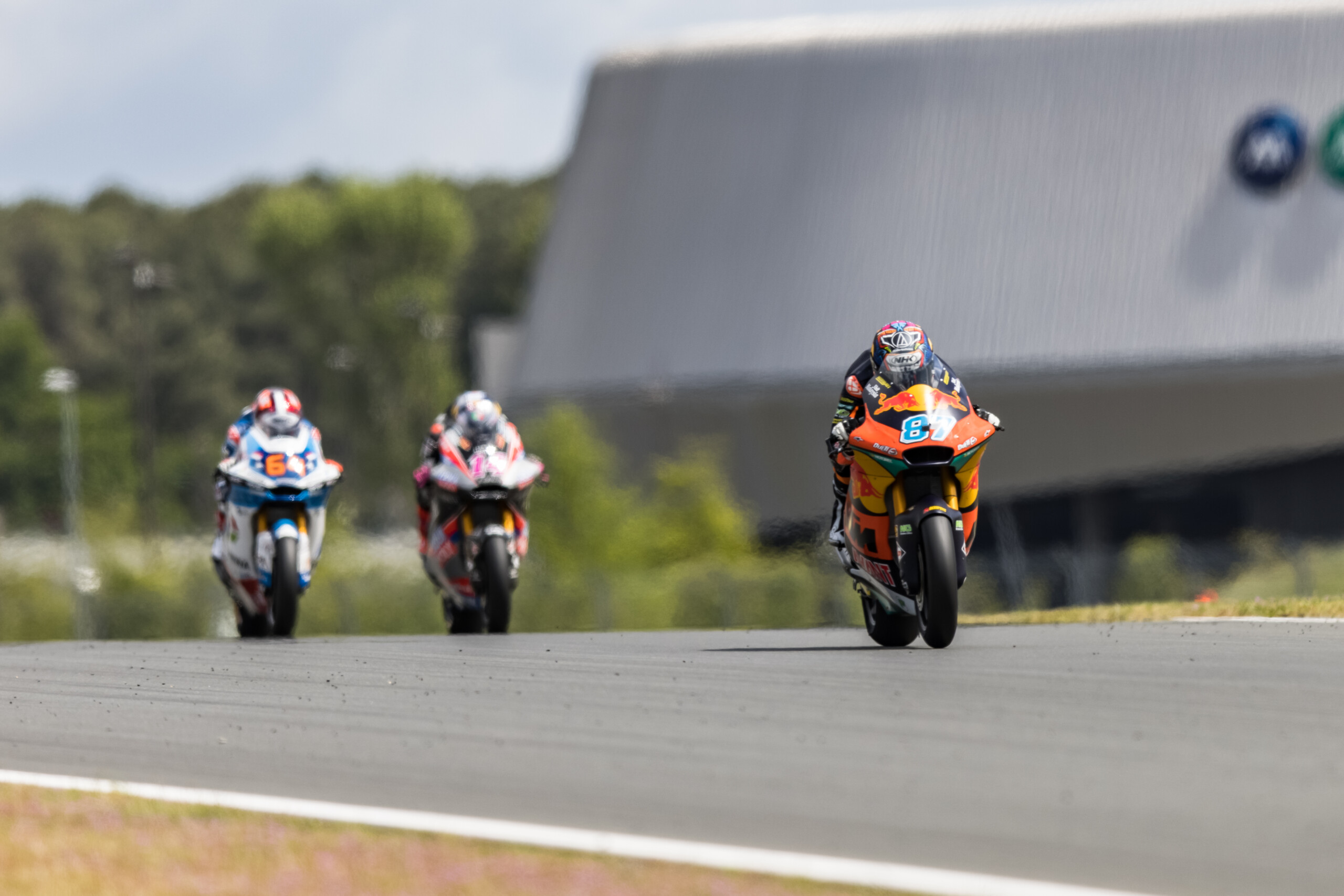 Lowes was nudged further down the order, starting from the fourth row of the grid in 10th place, and Jake Dixon was way back in 26th.

Bezzecchi made the best start off the line and led from the outset, R Fernandez taking second, and the American Joe Roberts in third.

Aron Canet, starting 4th, briefly moved up into 2nd, before crashing out at the Chemin ux Boeufs esses.

Lowes went out on the fifth lap, attempting to overtake into turn 8, catching a damp spot and collecting Vierge, resulting in Lowes retiring, unable to restart his machine.

Joe Roberts also left the race on lap 5, losing the front end at turn 9 and heading into the gravel.

Meanwhile at the front, Fernandez caught Bezzecchi and moved up into the lead, remaining there for the rest of the race.

Having dropped down the order early on, Remy Gardner worked his way back up, putting in the fastest lap of the race at 1’36.893.

By lap 16, Gardner was back up into 3rd and starting to close the gap. Bezzecchi runs slightly deep and onto the green paint beyond the track limits, and Gardner seized his chance to move up into 2nd.

Again, as on Saturday, the dark clouds started to gather, raising the possibility of the race being cut short, but the rain held off long enough to complete the full race distance.

Gardner can’t quite catch his teammate, with Fernandez maintaining nearly a one second lead to win the second Moto2 race in his rookie season. Gardner finishes a comfortable second, resulting in a team Red Bull KTM Ajo one-two on the podium. Bezzecchi takes the third spot, with Arbolino less than 3 seconds behind him in fourth.

Fabio Di Giannantonio, winner of the previous Moto2 race two weeks ago in Spain, finishes 8th and Jake Dixon is well off the pace, finishing 19th. 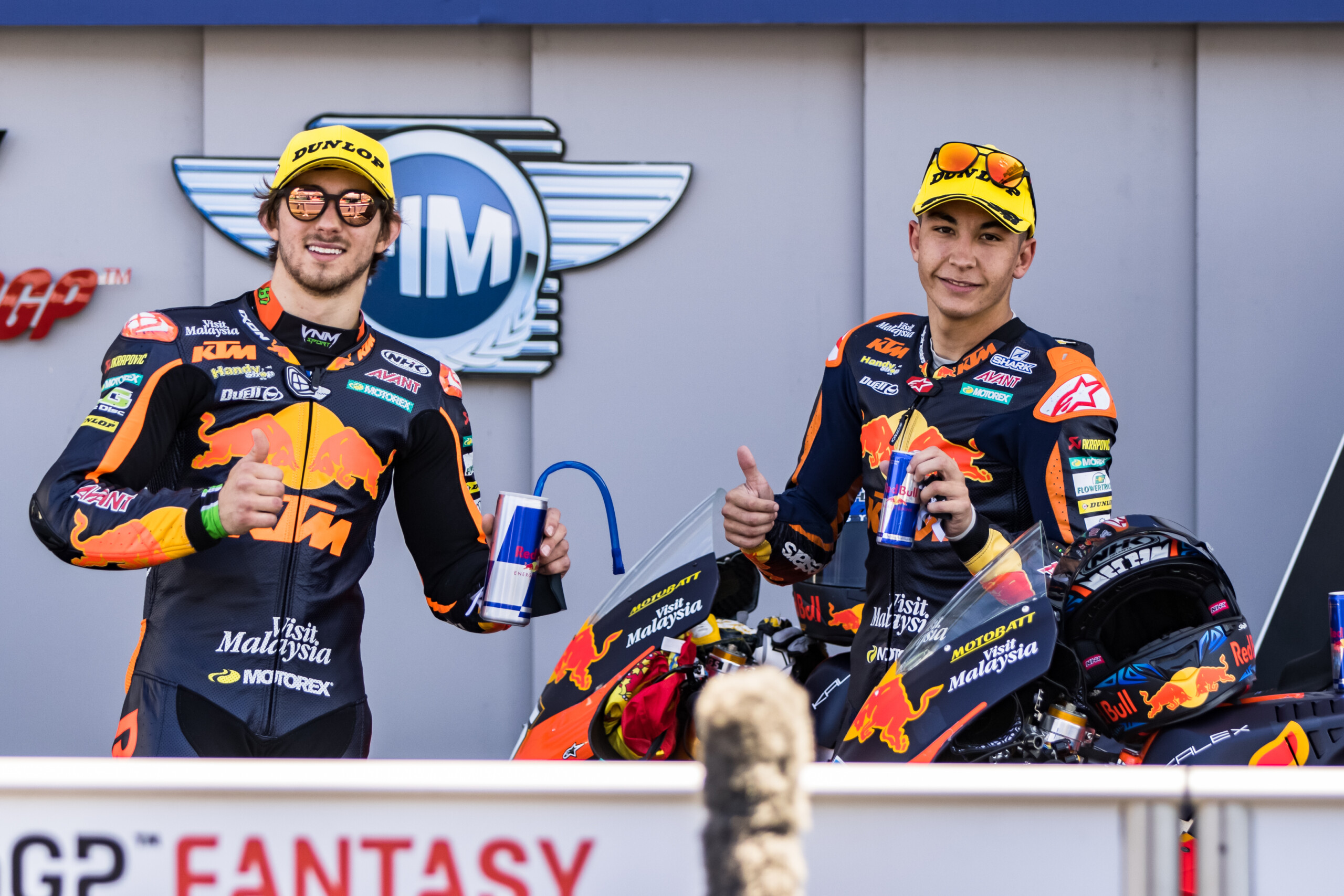 The weekend comes to an end with the championship even closer – Remy Gardner holds onto his lead with 89 points, but Fernandez is breathing down his neck with 88, and Marco Bezzecchi moves up into third with 72. Sam Lowes, his 66 points unchanged after a difficult weekend, moves down to fourth.

This leaves Lowes with plenty of work to do going into the 6th round at the Italian Grand Prix at Mugello in 2 weeks time. All eyes will be on the rookie Raul Fernandez, with Gardner facing a battle on his hands to keep hold of that top spot in the championship.