The only official test for the Moto2 grid took place last week with a number of riders laying down an early gauntlet and smashing the previous lap record.

The three-day test saw every rider from both Moto2 and Moto3 on track at the Autodromo Internacional do Algarve in Portimao to make final preparations ahead of the first race of the season. This comes after two private testing sessions which were led by Sam Lowes and Ai Ogura respectively.

Overall, the gauntlet was well and truly thrown down by the sensation that is Pedro Acosta. The 2021 Moto3 Champion has clearly stated his intentions before his rookie season has even begun, thanks to laying down a time of 1:41.552 on the final day. This smashed the previous lap record by almost half a second.

Not far behind Acosta was his team mate, Augusto Fernandez – however, he was a distant 0.154s behind his colleague on day three.

Aron Canet enjoyed a hugely consistent test, sitting within the top three at the end of each day of testing.

Trouble plagued Lowes, who missed the afternoon sessions of the first and second test, before then entirely missing the third day. He has been struggling with tendonitis which seems likely to hamper the start of his season, which is fast approaching.

The first day of testing, made up of three sessions, saw Jake Dixon, on the GASGAS Aspar Team machine, posting the fastest with a 1:43.169. Overall, the final times were very close with the top four riders covered by less than a second.

Fernandez’s team mate, Acosta, also chose not to run in the final session. He finished the day in fourth, rounding out a successful day for the KTM team.

The second day of testing saw the riders finding more time around the Portimao circuit – so much so that four riders were able to beat the 2021 pole time set by Fernandez.

The honours for the day went to Canet who was able to go one better than day one. His fastest lap time was a 1:41.892, beating the previous lap record. Rookie Acosta secured the day’s second fastest time, a mere 0.037s off the pace. His team mate, Fernandez, was third with Dixon dropping to fourth.

A number of drivers faced a struggle on the second day, with Keminth Kubo, Marcel Schötter and Fermín Aldeguer crashing in session one. That was followed by another crash from Kubo in session two, as well as tumbles for Ogura, Acosta, Sean Dylan Kelly and Lowes.

For the second consecutive day, Lowes chose to sit out the final session of the day. This may have been caused by Lowes’ struggles with tendonitis.

The final day of testing was “The Acosta Show” as the rookie smashed the lap record and set the fastest lap of the day. Thanks to this enormous lap, the top riders were a little more spread out on the final day. Acosta’s team mate rounded out a KTM 1-2, with Canet setting the third fastest time. All three have enjoyed consistently fast times across the entire test.

Aldeguer put his day two crashes behind him to set the fourth fastest time of the day. Albert Arenas was fifth and Ogura was sixth.

There were another series of serious crashes in the final day which led to Schötter visiting the medical centre for checks on his hand and Bo Bendsneyder breaking his collarbone. There were further crashes for Arenas, Canet and Dixon, among others. 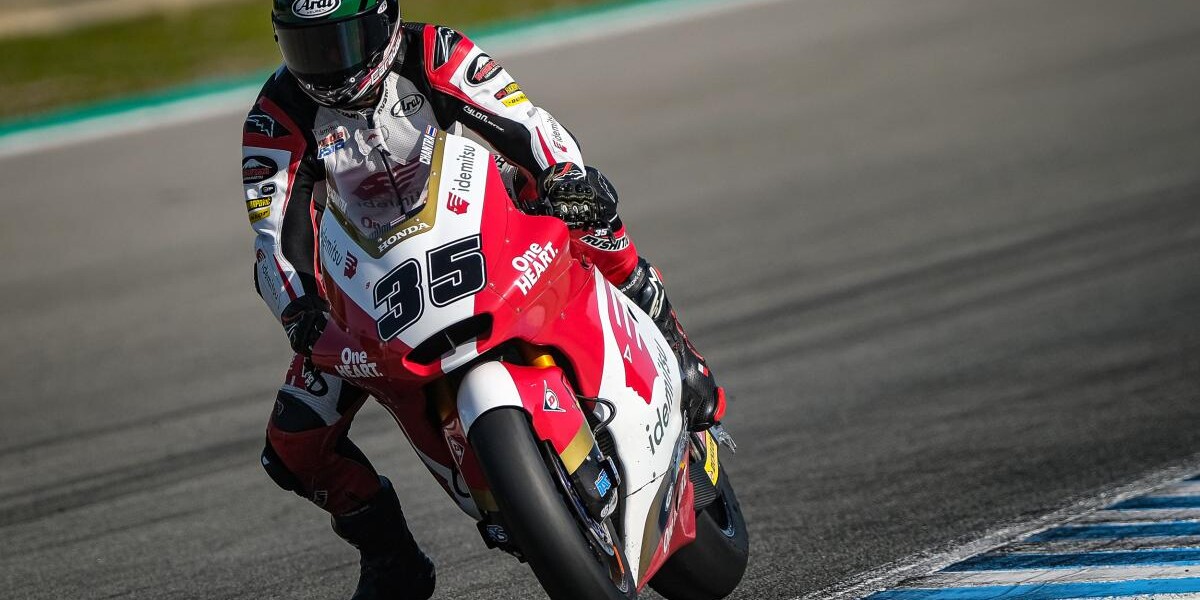 Ahead of the first and only official testing session next week, 20 Moto2 and Moto3 teams took part in a private test in Jerez. The session aimed to provide 49 rookies with much-needed time on track with their 2022 machines. In attendance were the likes of Alessandro Zaccone, Filip Salac and Jeremy Alcoba.

However, it was Somkiat Chantra who dominated the two day-long sessions. The Thai rider sat at the top of the timings sheet on day one, with a time of 1:42.213. He then found further improvements on day two, when he posted a 1:41.466.

Chantra will be eager to build on his much-improved 2021 season – his fourth and most successful season in Moto2, where his best result was a fifth at the Austrian GP.

His Japanese teammate, Ai Ogura, was just 0.035s behind him, rounding our a truly successful testing programme for Honda Team Asia. This will be Ogura’s second year in Moto2, and his second year with the Honda team. He enjoyed an impressive rookie season, finishing the year 8th in the championship and taking his maiden Moto2 podium with a second place finish at the Austrian GP.

Marcel Schrötter and his Liqui Moly Intact machine posted the third fastest time of the session. Having not stepped onto the podium since early 2020, Schrötter will be looking to carry this promising testing performance through to his 10th full season in Moto2.

The official test for Moto2 will commence on the 19th of February 2022 and last for three days. The first race of the season will then take place less than two weeks later in Qatar, on the 6th of March. Sam Lowes has laid down an early marker ahead of the 2022 season, topping the timesheets during a private testing session in Jerez. Just behind was his new team mate, Tony Arbolino, in second. This was Arbolino’s first experience of the new bike and he spent the sessions working closely with the team to find a set-up that gave him maximum confidence in the machine.

Third place was taken by Celestino Vietti on the Mooney VR46 Racing machine. The top 3 were covered by a mere 0.140 seconds.

These close timings could suggest that Lowes’ main competitor in 2022 will be his own team mate. Both riders were looking very strong and Arbolino seems to be very comfortable on the Elf Marc VDS bike already. However, this test may not tell the full story as there were only 6 Moto2 riders involved, with a further 15 Moto3 riders joining them.

Lowes, who enjoyed 3 wins and a further 2 podiums in 2021, commented that he was “really happy with the work done in these two days”. He then went on to state that “I was trying lots of components, especially today. Yesterday was more about getting back up to speed. But today we tried many things. As always in testing, some were good, some weren’t. But we found a nice direction. It’s been a good two days to get back into the riding side of things.”

He summed up the two-day test by saying he “felt confident” and is “looking forward to Jerez and making steps so we are ready for Qatar.”

Arbolino, who is the new boy at Elf Marc VDS this year, stated “It was a great test! We worked really well during the two days and we tested many things. The team worked really hard to give me a better bike which allowed me to feel more comfortable on it. I’m really proud of them for that. From here we’ll keep going and keep working hard to reach our objective.”

Both Arbolino and Lowes will be back in action for one more private test on the 8th and 9th of February. They will then join the rest of the field for the only official test, commencing on the 22nd of February.