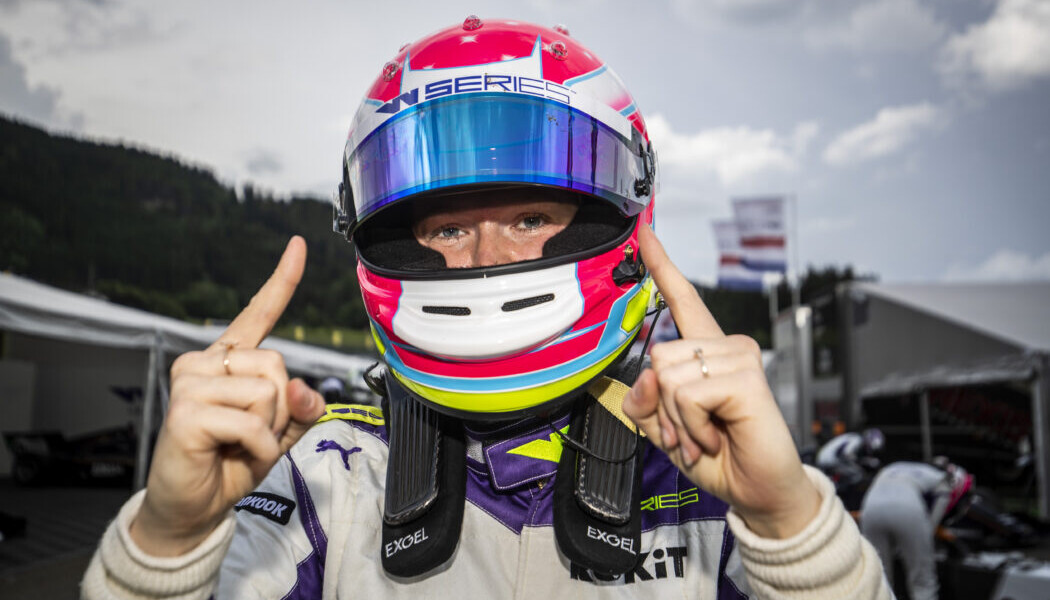 This weekend the W Series travelled to the Misano World Circuit in Italy for the third round of the all-female world championship.

The sun was shining on Saturday morning when Liechtenstein driver Fabienne Wohlwend took pole position with a laptime of 1:33.283. Championship leader Jamie Chadwick and Dutch driver Beitske Visser slotted in behind in second and third respectively, with Alice Powell in fourth and local girl Vicky Piria in fifth. Caitlin Wood suffered a suspension failure in qualifying which meant she was demoted last place on the grid.

The stunning weather continued as the nineteen drivers lined up on the grid for the race to begin.

Wohlwend had a good start from pole despite a little over steer, however, Jamie Chadwick had a blistering start and quickly snatched the lead from Wohlwend, Visser slipping past into P2 and demoting Wohlwend into third position. On the run down into turn one, Alice Powell hit Fabienne Wohlwend which led to a front suspension failure. As a result, Powell ran into the gravel which forced out the yellow flag and the safety car.

Chadwick had a great restart when racing got underway again, quickly gaining a second advantage over Visser in P2. Koyama and Piria had a close battle in fourth and fifth, with Wohlwend quickly closing the gap behind Visser in second. Wohlwent then went wide before the start finish straight, losing a little time, but managed to close back up to the rear wing of Visser.

Chadwick went wide which meant Visser closed right up to the British driver.
After her slight wobble, pole-sitter Fabienne Wohlwend set the fastest lap of the race, the first three drivers pulling away from the rest of the field.

Miki Koyama took to the outside to pass Vicky Piria for fourth position as Chadwick continued to set clean and consistent lap times at the front of the pack with thirteen minutes remaining, Visser and Wohlwend still fighting strongly for the win in second and third.

Sabre Cook majorly impressed having started in 15th and made her way through the field up to 9th, right in amongst the mid-field battle.

Visser was right on Chadwicks tail with eight minutes remaining, the Dutch driver thriving in the third sector, but not quite close enough to overtake the championship leader.

With five minutes remaining, Esmee Hawkey went wide and as a result, Naomi Schiff moved up to eleventh place.

Visser made a small mistake after she locked up the front left tyre with less than 2 minutes remaining. Schiff then had a spin after catching the kerb at turn 4 and 5 before rejoining in P16 and Cook and Moore had a close fight for eighth place.

Jamie Chadwick took the win in Misano and extended her championship lead after a flawless performance. Beitske Visser finished in second place and Fabienne Wohlwend in third – her first podium in the series. Miki Koyama finished in fourth followed by Piria in fifth, Garcia in sixth, then Pepper, Moore, Cook and Keszthelyi rounding out the top ten.

Hawkey finished just outside the points in eleventh, Bovy in 12th, then Rdest, Wood and Hawkins in 15th – who was given a five second time penalty for a jump start. Shea Holbrook finished in 16th, Megan Gilkes in 17th and Naomi Schiff in last place.

The championship is certainly hotting up as we pass the halfway point. The next round will be on the 6th July at the Norisring street circuit in Germany.

After another blistering lap in qualifying which landed her on pole position for a second time, Jamie Chadwick lined up at the front of the pack at Zolder this afternoon, with Beitske Visser in P2, and fellow Brit Alice Powell in P3.

Reserve drivers Vivien Keszthelyi and home-girl Sarah Bovy both made their debut appearances in Belgium today. Keszthelyi had to step in for Finn Emma Kimiläinen after she was taken ill and was advised not to race.

The race got off to a rather confusing start as yellow flags, caused by smoke pluming from the back of Sarah Bovy’s car as the rest of the pack darted away from their grid slots. The safety car was brought out to clear the stricken car.

Amid the confusion, Dutchwoman Beitske Visser ran into turn one and took the lead from championship leader Jamie Chadwick.

With 24 minutes remaining, Emsee Hawkey and Keszthelyi made contact, resulting in both spinning off-track. Gosia Rdest also got caught up in the incident, and the safety car was deployed once again. All three were investigated for the incident, with Rdest was also sent to the stewards for an alleged jump start.

Racing got underway again with 17 minutes remaining, with Visser quickly making a gap to second-placed Chadwick.

Miki Koyama made an excellent move at the restart whilst overtaking Caitlin Wood for P8, the Australian struggling to keep position over the Japanese driver.

With 12 minutes remaining, Visser led by 1.5 seconds. Marta Garcia was put under a lot of pressure from Sarah Moore behind in P4, with Pepper and Fabienne Wohlwent fighting hard for P5. American Sabre Cook was given a drive through penalty for causing a collision, slotting into last place once she had rejoined the field.

With two minutes remaining in the second round of the W Series championship, Alice Powell touched Jamie Chadwick whilst attempting an overtake, but managed to make the move stick and snatched P2 from her fellow Brit. Chadwick didn’t give up though, and gave Alice Powell a tough fight for the second spot on the podium. She eventually managed to snatch the position back on the final lap. The duo were 4.5 seconds behind leader Visser, who was having an impeccable race.

24-year-old Beitske Visser took an impressive victory in Zolder during a race filled with wheel-to-wheel action. Round three of the championship will commence in Italy at the Misano World Circuit on 8th June.

20-year-old Brit Jamie Chadwick started from pole position in the first ever W Series race this afternoon in Hockenheim.

The 18 female drivers took to the grid in their mechanically identical Formula 3 race cars to begin the 30-minute race.

Chadwick made a good start going into turn one, but she outbraked herself at the hairpin, going wide and giving the lead to Sarah Moore.

Canadian driver Megan Gilkes and Emma Kimilainen from Finland made contact going down the straight into the hairpin, bringing the safety car out and forcing the duo to retire from the race. Fortunately, both were okay.

Sarah Moore went wide at turn one at the restart which gave Chadwick back her lead. Spaniard Marta Garcia made some brave moves and moved up to third position while Moore fell down to P6.

Dutch racer Beitske Visser and Fabienne Wohlwend from Liechtenstein were fighting it out for P4 as Powell went on a charge for the lead, gaining quickly on Jamie Chadwick.

The middle of the pack were bunched up for much of the race. Japanese driver Miki Koyama was doing a superb job, progressing up to 9th from her starting position of 17th with ten minutes of the race remaining. She fought hard with Esmee Hawkey, Vicky Piria and Australian Caitlin Wood for the final points in the top ten.

With less than five minutes to go, Chadwick pulled out a comfortable gap in the lead, as Powell began to defend 2nd position from 18-year-old Garcia, the youngest driver on the grid.

Italy’s Vicky Piria dropped to P15 after having a spin and picking up a marker board in sector two before rejoining the pack.

After a difficult start, Jamie Chadwick claimed her maiden victory in the W Series, winning the maximum of 25 points and making motorsport history. Fellow Brit Alice Powell and Spain’s Marta Garcia joined her on the podium in 2nd and 3rd.

It was a thrilling first race in Hockenheim for the W Series, and hopefully, one of many more. Round two of this new and exciting series will take place on the 18th May in Zolder, Belgium.