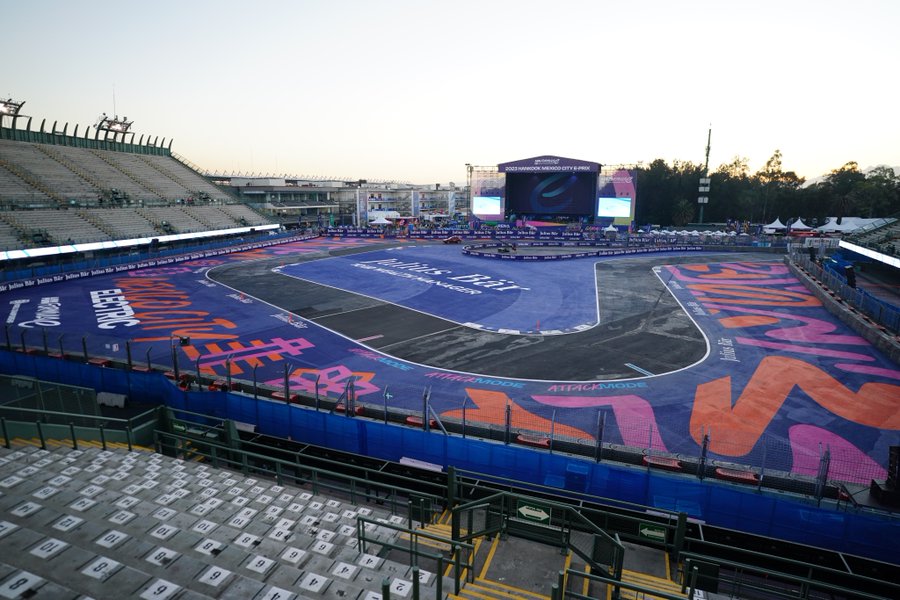 A tense qualifying session for the first race of the 9th season of Formula E saw Di Grassi take pole in Mexico City! Here is how it all played out.

The first Qualifying Session in Formula E got underway with Group A going out first.  At the half way point of Group A, Lotterer, Di Grassi, Buemi and Guenther were all in the top 4. Rast, Sette Camara, Da Costa, Vergne  Frijns, Fenestraz and Bird all needed to improve.

Lotterer, Di Grassi, Buemi and Fenestraz all went through to the duels.

Knocked Out in Group A:

In Group B, the remaining 12 drivers headed out to the track to try and get in to the finals. At the half way point, Ticktum, Hughes, Mortara and Wehrlein were all through with Evans, Cassidy, Vandoorne, Rowland, Dennis, Muller and Nato all needing to improve in order to get through.

Dennis, Ticktum, Wehrlein, Hughes are all make it through to the duels.

Knocked Out in Group B:

In the first Quarter Finals it was Lucas Di Grassi bs Sebastian Buemi. Di Grassi headed out first. Buemi had an early lead by 0.085 and increased it by 0.163 at the midway point. Di Grassi started to catch Buemi towards the end but Buemi lost time in the final sector and Di Grassi got through by 0.019!

In the second Quarter Final it was Sacha Fenestraz and Andre Lotterer.  Fenestraz went out first and Fenestraz had a very healthy lead by 0.25 but Lotterer was catching him. Lotterer got ahead of him and beat Fenestraz by 0.04 of a second!

In the third Quarter Final it was Jake Hughes and Dan Ticktum.  Hughes went out first and had an early lead over Ticktum. Ticktum started to catch him but Hughes beat Ticktum by 0.134!

In the fourth Quarter Final it was Pascal Wehrlein and Jake Dennis. Wehrlein went out first but Dennis got an early lead. He then built it to over 4 tenths but he got through by only 0.02!

Knocked Out in Quarter Finals:

In the first semi finals it was Andre Lotterer and Lucas Di Grassi. Lotterer went wide on the middle of the lap and that put Di Grassi over 1.5 seconds ahead of him. Di Grassi went though to the final after that error from Lotterer.

In the second semi final it was Jake Dennis and Jake Hughes. Jake Dennis went our first but Hughes got the jump on Dennis. Dennis quickly got some more time and started to catch. Jake Hughes had some slides in the final moments of the lap so Dennis got through to the final.

Knocked Out in Semi Finals:

In the final it was Lucas Di Grassi and Jake Dennis. Di Grassi went out first Di Grassi got an early lead and Dennis had 2 errors early on the lap. This lead Di Grassi to win the final!

Did you expect Lucas Di Grassi to take pole position in his first race with Mahindra?  Do you think he can maintain pole to take the first win of the season?

As a new year begins in the world, a new era dawns on a motorsport series. This time, it relates to Formula E. The changes being brought it are pretty huge in comparison to the previous generation.

Laps replaced timed races:
One of the most notable changes for the Formula E championship is the removal of timed races and the introduction of lap raced. This brings it on par with some of its other counterparts in the FIA series such as Formula 1. The amount of laps is unknown but this may bring a curveball into the team’s strategy. With this change, if there are any Safety Cars or Full Course Yellows at any stage during a race, more laps will be added onto the end of the race to maintain consistency.

Goodbye FanBoost, hello Attack Charge:
A key feature in Formula E, FanBoost, will be removed. This feature saw fans vote for a driver to gain 5% more power near the end of the race. However a new feature will be added: Attack Charge. Attack Charge is a 30 second stop which is mandatory which will allow the energy in the car to be increased from 300kW to 350kW. This will be trialled at certain races throughout the season and where it is not at the races, Attack Mode will be reinstated.

Rookie Sessions in FP1:
Following the footsteps of Formula 1, Formula E will allow drivers who have “never previously competed in the championship” to have at least 2 FP1 sessions during the season. These are mandatory and they will allow young drivers to see what Formula E has to offer as a sport.

Speaking about these regulation changes, Formula E CEO Jamie Reigle said that the new regulations “are evidence of the continued evolution and positive impact of the ABB FIA Formula E Championship” They go on to state that ” The combination of sporting enhancements, a step change in car performance, cutting-edge battery technology and the innovation of Attack Charge will make our racing more competitive and entertaining .”

New Teams and Drivers:
As with a traditional motor racing series, there have been changes to the driver line ups at teams and a few team changes. The most obvious one is Mercedes EQ  have left the world of Formula E and have been replaced by McLaren.
McLaren’s line up is Jake Hughes and Rene Rast. The Formula E champion of 2022 Stoffel Vandoorne has gone to Penske while Nyck DeVries has gone over to Formula 1’s Alpha Tauri team.

Nissan have signed Sacha Fenestraz who took over from Antonio Giovinazzi at the final race last year, Sergio Sete Camara has joined NIO 333, Andre Lotterer has joined Avalanche Andretti with Antonio Felix da Costa joining Porsche and Mahindra Racing signing Lucas Di Grassi. These changes are expected to spice up the grid and the racing.

New Venues Enter the Calandar:
With a new season of Formula E also brings new and exciting venues which bring a factor of unpredictable to the track. The 4th, 5th and 6th rounds of Season 9 are the majority of the new venues on the calandar. These are Hyderabad in India, Cape Town in South Africa and Sao Paulo in Brazil. The final new venue for this season is Portland, America. Each of these venues are set to bring new and exciting changes for the drivers and the teams.

Formula E kicks off the start of the new era in Mexico City on 14th January 2023.

The 19th round of the 2018 Formula One World Championship brings us to the 4.3 kilometre-long Autodromo Hermanos Rodriguez for the Mexican Grand Prix, where the world championship is set to be decided in Lewis Hamilton’s favour.

1992 would be the last race in Mexico for 23 years, before the circuit’s reintroduction as a revamped circuit in 2015, with the victory being taken by Mercedes’ Nico Rosberg.

A week after narrowly missing out on his fifth world title in the US – the country where he desperately wanted to get the job done – Lewis Hamilton now will need just a seventh place finish to overtake Sebastian Vettel on the world championship count.

After a brilliant race last time out, it was a third place finish for Hamilton, behind second-placed Max Verstappen, who started 18th, and extremely popular race winner Kimi Raikkonen, who took his first win in Formula One since the opening race of 2013.

Off the back of that, Mexico is a track where we should expect a tight battle between all three of F1’s top teams. Max Verstappen won the race last season, and Red Bull are anticipating another strong weekend this year. Furthermore, Ferrari are expected to be slightly stronger than Mercedes, which for really the first time this year, gives us a race in which any of our top six could take the win.

A win is something Sebastian Vettel will desperately want, having seen his team-mate win in the States. In order to achieve this, however, he will need a weekend free from mistakes. The four-time champion has proven to be a bit of a magnet to the two Red Bulls in the past couple of races, hitting Max Verstappen in Japan and Daniel Ricciardo in the States.

However, a perfect weekend with a victory will probably not be enough for Vettel to keep his title hopes alive, and he would need a remarkable amount of bad luck for Lewis Hamilton who, excluding his DNF in Austria, has a lowest finishing position of fifth.

As if the task weren’t difficult enough already, Ferrari will have to factor in the Red Bulls, who will up for a fight for victory at a track where they will be brimming with confidence. Verstappen will be a tough man to pass, and Ricciardo will be desperate to get one last win before he leaves the team for Renault at the end of the season. This, though, could also be a potential banana skin for Lewis Hamilton, making Mexico an eagerly anticipated race at the tail-end of a season which has seen Mercedes turn the tables on Ferrari from the start of the year and give them a vicious beat-down in the championship.

It was an uphill struggle already for Vettel, but a series of errors from himself and Ferrari this year have meant that Hamilton is one step away from title number five, and in a race just a week before Mexico’s death festival, we are set to once again see the death of Sebastian Vettel’s title challenge, and the rise of Lewis Hamilton to the level of the great Juan Manuel Fangio.