Trident’s Lirim Zendelli controlled the F3 feature race at Spa for his first win in the series, as Oscar Piastri capitalised on problems for title rival Logan Sargeant to retake the championship lead.

Zendelli got a clean start from pole to keep the lead at the start ahead of ART’s Theo Pourchaire and Aleksandr Smolyar. Two rows back, Zendelli’s teammate David Beckmann passed Sargeant to move up from fifth to fourth, and started targeting Smolyar’s podium position.

The early battles were neutralised by a virtual safety car on lap 3, following a series of punctures for Clement Novalak, Andreas Estner and Enzo Fittipaldi that left debris on track, and Alessio Deledda spinning into the gravel.

When the VSC was withdrawn on lap 5, Beckmann pounced on Smolyar to take third. Smolyar briefly retook the position, but Beckmann repassed the ART definitively on lap 7 and pulled out a gap to hold his place on the podium.

At the same time, Zendelli broke out of DRS range from Pourchaire and proceeded to pull away more with each lap. After adding another second over Pourchaire by lap 10, Zendelli continued pushing until the chequered flag, crossing the line almost five seconds clear of the ART in second and Beckmann in third.

Behind the leading trio, Piastri finished fifth behind Smolyar in a potentially crucial result for his championship campaign.

Sargeant had stayed in fifth early on after being passed by Beckmann, and was gaining on Smolyar to move up to fourth. Meanwhile, Piastri was making his way up from the lower half of the top 10, passing Richard Verschoor and Liam Lawson to get up to sixth by lap 10.

With four seconds separating the two Premas, Sargeant then suddenly slowed on lap 13, losing two seconds with a suspected engine problem. Piastri closed up to within a second two laps later, before he breezed past Sargeant for fifth on the run to Eau Rouge.

Sargeant continued to nurse his car through the final laps despite saying on team radio that he didn’t think he could make it to the end. However, he lost another two positions to teammate Frederik Vesti and Trident’s Olli Caldwell before the chequered flag, and eventually finished in eighth. The result has given Piastri the lead of the championship again with five points in hand over Sargeant.

Lawson finished in ninth place after struggling with his tyres for much of the race, and Verschoor will start from reverse grid pole tomorrow after taking tenth place. Finally, Pourchaire gained the extra two points for setting the fastest lap within the top ten.

The two rookies making their debuts this weekend, Michael Belov and Pierre-Louis Chovet, finished 20th and 22nd respectively, while Estner finished 27th after his puncture on his return to F3. 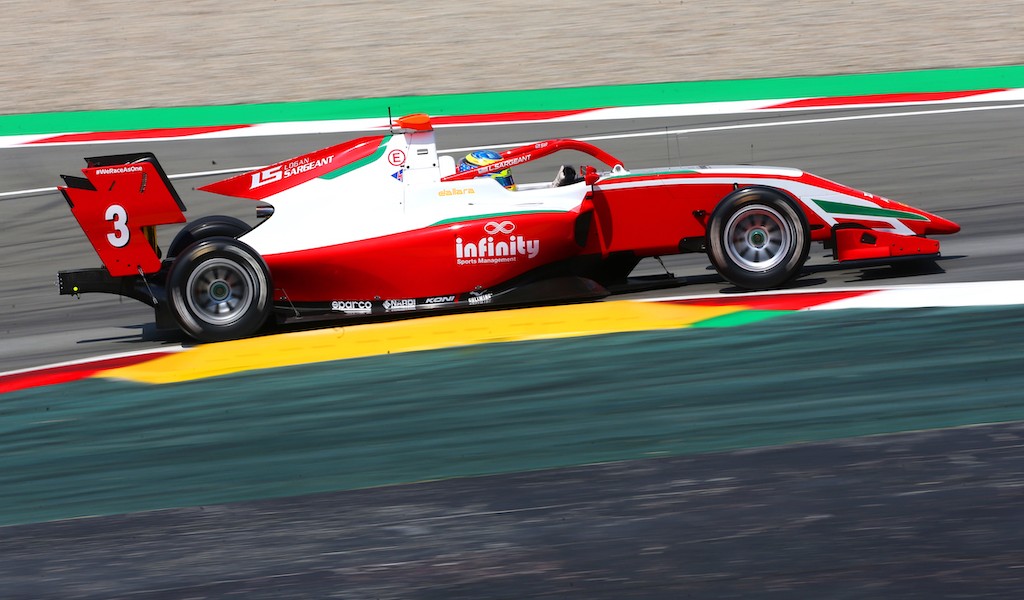 The fight for the 2019 FIA Formula 3 title comes to an end this weekend, as the championship heads to Russia’s Sochi Autodrom for its eighth and final round.

Runaway championship leader Robert Shwartzman has about as good a chance as he can hope for of claiming the title at his home race. The Prema driver has only one challenger remaining who can snatch the title away from him—his teammate Jehan Daruvala. But with 33 points between them against only 48 on offer this weekend, Daruvala’s chances are looking slim at best.

Discounting the points for pole and fastest lap, Daruvala must finish the feature race in first or second while hoping Shwartzman fails to score to even take the title fight to the final sprint race on Sunday. Meanwhile, a top two finish for Shwartzman in the feature race will earn him the title with one race to spare, regardless of how Daruvala scores.

If Shwartzman does leave Sochi with the F3 title, it will cap off a season in which the Russian has claimed three victories, five further podiums and helped Prema to clinch the year’s teams’ championship.

While Shwartzman and Daruvala chase the top honours, there is a fierce fight behind them for third in the standings, between Hitech’s Juri Vips and Prema’s Marcus Amstrong.

Vips was a title contender back in the summer after victories in Austria and Great Britain, but has endured a run of pointless finishes since the Spa feature race. This has left him 58 points adrift of Shwartzman and only two ahead of Armstrong, whose two sprint race wins in Hungary and Belgium have propelled him up the standings.

Both drivers have plenty to prove by taking the coveted third spot. For Armstrong, that he can lead Prema’s title charge when Shwartzman likely graduates from F3 next season. And for Vips, that he still deserves Red Bull’s focus as their next best junior progression to Formula 1.

Two new faces will be joining the F3 grid for the Sochi finale.

The first is 2017 Asian Formula Renault and Chinese F4 champion, Hon Chio Leong of Macau. Leong will race in the third Jenzer car, which has been notable for its revolving lineup this season with Artem Petrov, Giorgio Carrara and Federico Malvestiti all contesting at least one race as teammate to regular drivers Yuki Tsunoda and Andreas Estner.

Leong will also be with Jenzer at F3’s post-season test in Valencia, with the aim of competing on home soil at the non-championship Macau Grand Prix.

The second new driver is David Schumacher, son of former F1 driver Ralf and cousin to Prema F2 driver Mick. Schumacher joins Campos in place of Alex Peroni, who is missing the Sochi finale after fracturing his vertebrae in a crash at the last round at Monza.

UPDATE: There will be one further change this weekend, as ART’s David Beckmann will skip the Sochi finale due to a family emergency. He will not be substituted, meaning ART will field only two cars for Christian Lundgaard and Max Fewtrell.