The British team, who were 17 points behind leaders Rosberg X Racing (RXR) going into the weekend, pulled off an unlikely comeback to take the crown from their rivals.

In the first round of the season in Saudi Arabia, it was RXR who looked the strongest. The German-team continued their performance from the previous season by claiming maximum points for the weekend. X44 had a decent race, finishing third.

The next two rounds in Sardinia seemed to confirm RXR as the title favourites. Despite finishing fifth in the first Sardinian round, they won the second.  X44 continued to be slightly off the pace, ending round three fourth in the standings – one point behind Acciona Sainz in third. Chip Ganassi came first in the second round.

But round four in Chile was when X44 started to show themselves as title protagonists. Despite picking up a 10 second penalty in the Semi-Final for knocking over a waypoint marker, they made the final and went on to win it. With RXR finishing sixth overall, the gap between them was seventeen points.

Going into the final round in Uruguay, X44 still had a lot to do to overtake RXR in the standings. If the British team were hoping for a miracle, it didn’t initially seem like they would get one. During Qualifying One, X44 driver Cristina Gutierrez crashed, leaving the team too much work to fix the car in time for Qualifying Two. They were allowed to use the spare car, but had to serve a five second time penalty in the Crazy Race the next day.

In Qualifying Two, Sebastien Loeb used all of his experience to help the team get the points they desperately needed. Sensing X44 were destined for the Crazy Race regardless of where they finished, Loeb dropped back from the pack to give himself space to go quickly through the Continental Traction Challenge. His plan worked as his and Gutierrez’s time through the section combined to put them quickest and gain the five bonus points.

To win the championship, though, X44 still needed to make it to the final and then finish at least third. Making the final wasn’t made any easier when championship leaders RXR also had a poor qualifying. Only one team could progress from the Crazy Race.

With it all on the line, and with the time penalty looming over them, X44 put in a great performance to see themselves through to the final. Even better for them, RXR were disqualified from the Crazy Race when they had too many engineers in the Switch Zone trying to repair damage sustained on the opening lap. RXR would only pick up one point the entire weekend.

The final approached and X44 were still in with a chance of winning the championship. When nobody was able to beat their time in the Continental Traction Challenge, X44 knew third was enough to win.

It was a slow start for the championship hopefuls, as they entered the switch zone in fourth place. They would remain there until the very end when it was revealed that Andretti United, who were only two seconds up the road, would receive a seven second penalty for speeding in the switch zone.

The stars had aligned and X44 had won the title.  Meanwhile, ABT Cupra won their first ever race, and McLaren claimed their first podium.

Championship Standings after Round 5:

Another crazy season of on-track action in Extreme E has come to a close. But, of course, Extreme E is about more than what happens on track.

Off-track Extreme E have been involved in a number of legacy programmes aimed at leaving a positive impact on their race locations.

This year they have supported the protection of the Green and Hawksbill turtles in Saudi Arabia, restored seagrass habitants and areas hit by wildfires in Sardinia, rebuilt habitats for the Loa Water Frog in Chile, and are working with the Organisation for Cetacean Conservation in Uruguay.

Now the teams look ahead to next season, where we will see a new race location (Scotland), and potentially some new driver line-ups too. The 11th March can’t come soon enough. 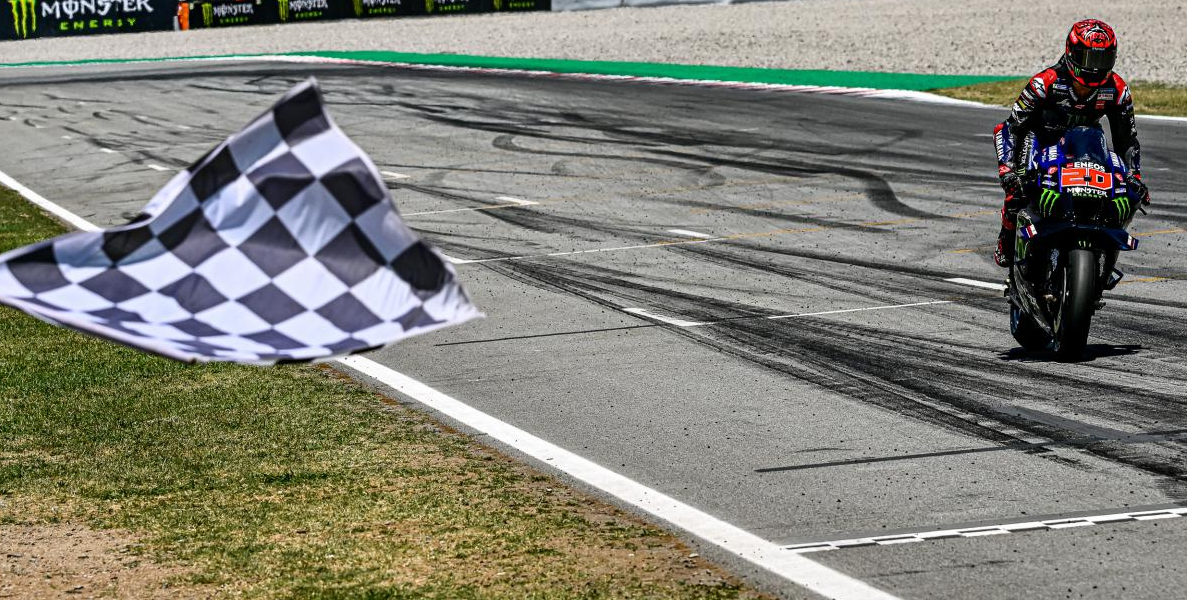 Sunny conditions in Spain made for a good qualifying session seeing Aleix Espargaro (Aprilia) claim pole with 1:38.742. Narrowly missing out on taking the pole for himself – Francesco Bagnaia (Ducati) took second and Fabio Quartararo (Yamaha), finished the front row.

Marc Marquez (Honda) was not present over the weekend due to having further surgery on his shoulder so Honda’s test-rider Stefan Bradl stepped in.

All eyes were on the Spanish home-riders (which there were 8 on the grid on Sunday). The brilliant weather conditions remained for Sunday and the crowds were ready.

Aleix got a great start and instantly pulled ahead. But into turn one, Fabio took the lead. More action continued on the turn though as three bikes hurled into the gravel behind. It soon became clear that Takaaki Nakagami (Honda) had gone into the first corner too quick and couldn’t stop in time, taking himself and Alex Rins (Suzuki) out along with him. But, Rins was not the only rider, as Nakagami fell his helmet knocked against Bagnaia’s rear tyre, causing him to also crash seconds later.

It was an unexpected start to the race. However, perhaps a more expected start was how quickly Fabio started to eke away from both Aleix and Jorge Martin (Ducati), who were in second and third.

Another great start came in the form of the now, sole-running Suzuki – Joan Mir, who had made up an impressive 11 places. Starting 17th on the grid and by the end of lap one had made it up to 6th.

Lap 3 saw Martin pass A. Espargaro for 2nd while Quartararo put in the fastest lap.

Bagnaia managed to re-join the race, but only briefly, having to concede and retire to the pits.

With 21 laps to go, Quartararo got another fastest lap and was 1.627 seconds ahead of Martin. Fabio was pushing hard to get a substantial lead.

On lap 6 Marco Bezzecchi (VR46) ended his race early, crashing out on turn 10.

Another rider who had made his way through the pack was Enea Bastianini (Ducati), who was in 7th place and hoping his luck would fair better than the last race (when he crashed out of 6th place). But, bad luck continued to hamper ‘The Beast’ as he crashed out for the second time in a row, this time on lap 8 of 24, turn 5.

Back at the front, the lead had increased further to: 2.534 seconds.

With 15 laps to go Aleix passed Martin on the home-straight to re-take 2nd place, knowing he had to get the gap down between himself and Fabio. But the Ducati riders – Martin and Johann Zarco had other ideas and managed to keep him with them. But, in doing so helped in extending Quartararo’s lead, which was 3.862 seconds with 11 laps till the chequered flag.

‘The Martinator’ re-took 2nd on lap 16, wanting to catch Fabio himself, who had managed to add yet another second to his lead. Martin however, had the same problem Aleix had, he couldn’t gap the two riders behind him. Meaning all three riders remained in their group 3.420 seconds ahead of Joan Mir (Suzuki), who had managed to pass Luca Marini (VR46) to take 5th position.

4 laps remaining and Espargaro passed Martin again to claim 2nd once more. Both Spanish men wanted to impress at home. But, it would seem no-one was going to be able to catch Quartararo, who was nearly 6 seconds ahead of the group. (Not even chest protector issues would stop him this year).

Fabio crossed the finish line with one lap to go, time to really concentrate to bring back the victory. Bizarrely though as Aleix crossed the line moments after he started to shake his head and slow down, seemingly the unthinkable had happened – perhaps he had an electrical fault on the last lap? But, then his hands went up waving to the crowd. He had mistaken his last lap as the last lap of the race. Only to suddenly realise there was still one more lap, rejoining behind Marini in 6th. There were no words to describe the disappointment he must have felt, handing over a solid podium finish. He did manage to pass Marini for 5th place but, it was Quartararo who crossed the finish line to take the win whilst celebrating by ‘checking his watch’. Martin finished 2nd and team-mate Zarco claimed 3rd.

After two DNF’s in a row, it was nice to see Mir claim 4th position. There is now only 22 points seperating the top two riders, even with Aleix’s unfortunate mistake, the championship is still very close.

What will happen in round 10?