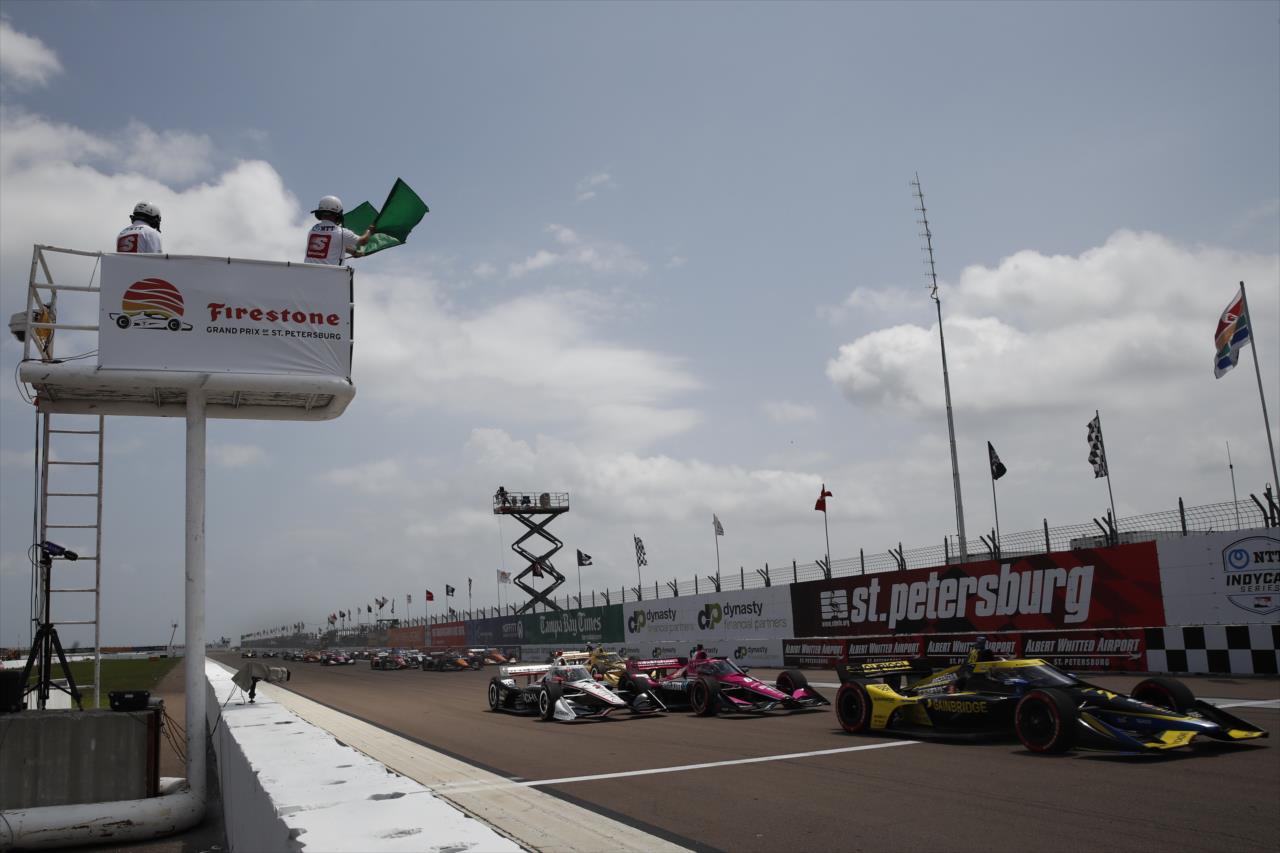 Josef Newgarden took the first win of the 2019 season at St Petersburg, a win that marks his first around the demanding track and Penske’s first there since 2016. He held off a late challenge from defending champion Scott Dixon in what as an action-packed season opener.

After being shuffled back at the start, Newgarden didn’t come to the lead until the second round of pit stops, but there he out-foxed the rest of the leading group and emerged from the pits with a near five-second lead over Marco Andretti, who was doing a good job of holding up the rest of the field. With the help of Andretti once more in the closing stages of the race, Newgarden came under threat from Dixon with the lead dropping to as low as 1.2 seconds but, once Andretti was out of the picture, Newgarden rebuilt his lead to take the win.

Dixon was forced to settle for second-place having not led a single lap of the race. He managed to pass Will Power during the first Andretti hold up, taking second place and allowing him to have a chance at fighting Newgarden for the win. However, the lead Newgarden had built up was big enough to act as an effective buffer, even when Andretti came back into the mix. It wasn’t quite the perfect start to Dixon’s title defence, but it was good enough.

For a while, it looked like the other Chip Ganassi of Felix Rosenqvist would be going for the win, but he got caught out and dropped back by the second round of stops. Rosenqvist passed Newgarden going into Turn 1 on the first lap, putting him in second and in a position to fight Power for the lead. The Swede took the lead after the first restart and went onto lead 31 laps in his debut race, the most bar race winner Newgarden. He came home in a respectable fourth place and showed that he’s ready to take it to teammate Dixon this season.

After starting on pole, Power had to settle for a podium in third with his nemesis, like so many others, being the second stops and Andretti’s rather wide car. He couldn’t clear Andretti after the stops and was passed by Dixon who then disappeared up the road, meaning Power was unable to improve his position in the final stages of the race, but he was still happy with his result, given how badly St Pete has treated him over the past two years.

Alexander Rossi was another driver who was forced to settle for a position probably lower than he was hoping for, especially after he came so close to the victory last year. Like last year, a rookie got the better of him, though this time it was Rosenqvist and not Robert Wickens, meaning Rossi couldn’t do much better than fifth having led two laps during the pit stop sequences.

Wickens attended the race with his Schmidt Peterson Motorsports team to support their drivers and celebrate his thirtieth birthday with his fellow drivers. Attending St Pete was one of Wickens’ many goals on his road to recovery after his enormous crash at Pocono last season, with the Canadian a welcome figure in the paddock once more.

On track, SPM didn’t have such a good weekend with James Hinchcliffe finishing in sixth after getting the better of Penske’s Simon Pagenaud in what was a race-long battle. On the other side of the garage, Marcus Ericsson didn’t even see the chequered flag with a water pressure issue cutting his IndyCar debut short. Their sort-of-teammate Jack Harvey finished tenth in the #60 Meyer Shank supported SPM entry, in his first of ten races this season.

Rosenqvist may have taken the title of top rookie but fellow rookies Colton Herta and Santino Ferrucci were not to be forgotten in the first race of the season, finishing eighth and ninth respectively. Herta’s the only Harding driver after they failed to get an engine lease for their second car and Ferrucci lost teammate Bourdais 11 laps into the race, meaning the two rookies had to go it solo, but still delivered more than respectable performances.

One recurring feature of the race was Honda engine failures, of which there were four with Ryan Hunter-Reay, Takuma Sato, Ericsson and Bourdais all suffering issues that led to their retirements. While Honda had four failures, their rival Chevrolet had none, meaning the former really needs to step up on the reliability side of things, otherwise the Chevy teams could be leaving them well behind.

That concludes the season opener at St Petersburg with IndyCar back in action on March 24 at the Circuit of the Americas.