After an action-packed season opener in Bahrain last week, Formula 2 is back again this weekend for Round 2 of the championship at Saudi Arabia’s Jeddah Corniche Circuit.

After last weekend’s races it’s experience that leads the way heading to Jeddah. Richard Verschoor and Theo Pourchaire took the two victories in Bahrain, and the remaining podium places were claimed by Jehan Daruvala, Liam Lawson and Juri Vips. In the championship picture it’s Pourchaire who leads the standings ahead of Lawson and Vips, with Ralph Boschung in fourth place.

The only “true” rookie to score in Bahrain was Ayumu Iwasa, who finished eighth in the sprint race despite starting from the very back of the field after an error in qualifying. However Logan Sargeant, Jake Hughes and Jack Doohan – who all made a handful of F2 starts at the end of last year – managed to score as well, with Doohan even taking pole for the feature race.

With a Formula 2 weekend now under their belts and no long break in between, those rookies will be coming to Jeddah looking to take the fight to the more experienced drivers on the grid. For drivers like Doohan and Iwasa that will mean bringing the same rapid speed shown in Bahrain but without the errors and incidents that cost them larger points hauls, while Sargeant’s job will be to unlock the same speed in his Carlin found by teammate Lawson.

The fight at the front is wide open

Although Bahrain was just one round in a long season, the early signs from the weekend are that we can expect plenty of close fights for victory from right across the field.

Pourchaire will come to Jeddah as an obvious favourite for pole and victory, given his position as championship leader. But it’s worth noting the ART driver only leads the standings by a single point, while Lawson’s double Sakhir podium is an impressive marker to lay down at the start of a season.

Felipe Drugovich was another driver who showed pace to watch for last weekend. Seemingly rejuvenated now he’s back at MP Motorsport, the Brazilian looked like he was going to take pole position until Doohan pipped him to it. His new teammate Clement Novalak was also very fast in practice last week, even if that wasn’t converted to points, so expect to see MP Motorsport near the front again in Jeddah.

And if Bahrain pace is anything to go by, keep an eye out for Boschung at Campos this weekend. The Swiss driver took a pair of fourth places in Sakhir after fighting with the frontrunners, but more than that he’s also returning to the site of one of his two podium finishes from last year. Boschung has always run well at street circuits and seems to be bedded in with Campos enough to bring out another great result this year.

Hauger needs a result after a tough first round

One driver who will be hoping to be in the fight at the front this weekend is Prema’s Dennis Hauger. After being tipped as a championship favourite for this year, Hauger opened the season just outside the points in Bahrain’s sprint race, then retired in the pits after being released with only three tyres attached in the feature race.

There’s nothing Hauger can do to avoid a repeat of that pitstop incident. But as for not missing out on points in the race, the key right now will be improving his qualifying. Hauger qualified in 15th in Bahrain and nearly a full second off of Doohan’s pole time, which meant he couldn’t benefit from the sprint race’s reversed top 8 and had to fight hard just to get into contention.

Getting on top of that this weekend will be difficult, as the Jeddah street circuit is completely new to Hauger but known from last year to key rivals like Pourchaire, Lawson and Vips. But Hauger also took nearly half of the available pole positions in his Formula 3 campaign last year, so if he can get to grips with the track early on there’s no reason he can’t be fighting at the front on Friday’s qualifying session. 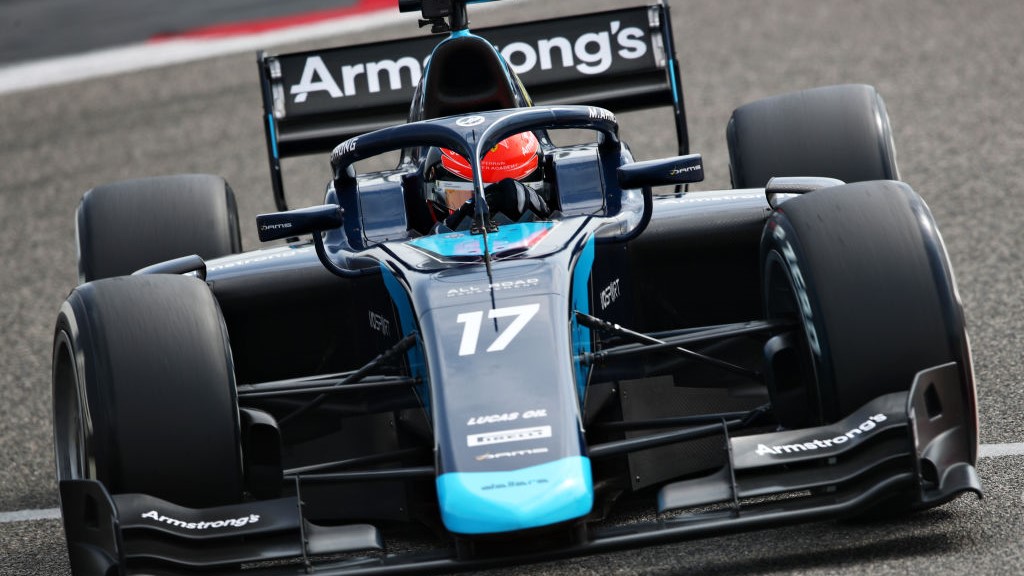 Marcus Armstrong took advantage of a front row start in the first Jeddah sprint race to take his first win in the series, seeing off polesitter Liam Lawson.

Armstrong had wheelspin off the line and looked to drop behind Lawson, but found better acceleration in the second phase of the start. The two cars went into the first corner chicane side by side, but Armstrong muscled Lawson to the edge of the track and came out ahead.

Behind them, Ralph Boschung improved from fourth to third by passing Juri Vips. Further back there was contact between Guilherme Samaia and Marino Sato into the Turn 4 chicane, which left both cars stranded and brought out the safety car.

When the race restarted again on lap 4 it only lasted a few corners, as title contender Guanyu Zhou was tipped into a spin trying to pass Christian Lundgaard for sixth. Zhou managed to keep the car going albeit at the back of the field and with a broken front wing, and a brief virtual safety car was deployed to clear away the debris.

When the VSC was withdrawn on lap 5, Boschung in third started putting in fastest laps to close the distance to Lawson ahead. But with overtaking so difficult around Jeddah he wasn’t able to make a move for second place, and Boschung instead burned through his tyres and came under attack from Vips.

On lap 10 Vips blasted past Boschung for third under DRS on the start/ finish straight. At the same point on the following lap Boschung lost fourth place to Felipe Drugovich, and by the end of lap 13 he’d been passed by Robert Shwartzman, Lundgaard, Theo Pourchaire and Oscar Piastri to drop out of the points.

The safety car made another appearance in the closing stages of the race when Pourchaire spun into the wall at Turn 22, the same place Charles Leclerc crashed during FP2.

When the race resumed it was with just three laps to go, and at the front Lawson put a renewed attack on Armstrong. The Hitech driver managed to hound the DAMS by just a few tenths of a second across the closing laps, but Armstrong’s defensive driving saw him hold off Lawson until the chequered flag and keep first place.

Lawson finished second ahead of Hitech teammate Vips, with Drugovich in fourth. Shwartzman crossed the line in fifth but dropped to sixth due to a penalty for leaving the track and gaining an advantage earlier in the race.

Jehan Daruvala benefited from the penalty to finish fifth, after a bold move at the restart saw him pass both Lundgaard and Piastri. Lundgaard finished seventh behind Daruvala and Shwartzman, and Dan Ticktum took eighth place after passing Piastri for the final point on the last lap.

Piastri finished ninth and Bent Viscaal took reverse grid pole for the second race with tenth place. Jack Doohan was the highest of the F3 graduates making their debut this weekend with a P11 finish.