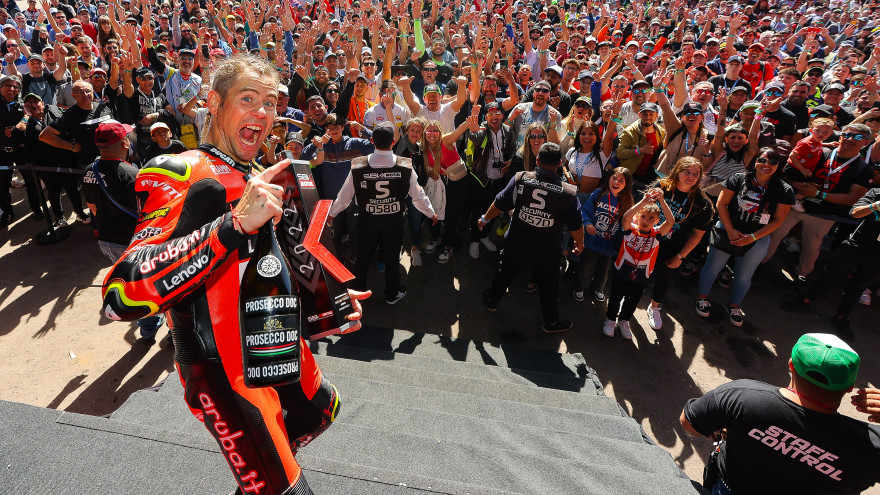 Track temperature was a lot higher compared to race 1, which meant it would start to feel greasy for the riders, and tyre management would surely be a big factor for the race.

Lights out for race 2 then, and it was Rinaldi (Aruba.it Ducati) with a great start, followed by the Kawasaki team mates of Rea and Lowes in 2nd and 3rd, Bautista 4th, and Toprak in 5th. An unhappy Loris Baz (Bonovo Action BMW), got a shove from Bassani (Motocorsa Ducati), which sent the Frenchman ploughing into the gravel, and his race was over. Bassani would no doubt receive a penalty for that incident.

Next lap and Rea ran wide losing positions and ended up in 6th. Lowes was having a great start to the race, and was attacking Bautista, the two of them fighting for 2nd. Toprak was now up to 4th.

Next lap and Bautista was finding his rhythm and came through on Lowes to move into 2nd. Toprak was next to come through Lowes, and moved into 3rd. Meanwhile further back it was Redding (BMW Motorrad) 10th, Laverty (Bonovo Action Ducati) 11th, and Vd Mark (BMW Motorrad) 12th.

With 16 laps to go, it was Lecuona (Honda HRC), who set the new fastest lap with a 1:38.2, impressive from the ex-MotoGP rider, as it was his first visit to San Juan. Bautista took over the lead from his team mate, and Toprak wasn’t about to let Bautista clear away, and moved through on Rinaldi into 2nd. Further back it was the Kawasaki team mates of Lowes and Rea, in 4th and 5th respectively. Bautista held a gap of 0.2s to Toprak.

Next lap and Toprak put in the new fastest lap of the race with a 1:37.923. The leading two of Bautista, and Toprak were pulling away from the rest, and had pulled out a significant gap. Rinaldi then ran wide allowing both of the Kawasaki team mates through. Positions were as follows; 1. Bautista 2. Toprak 3. Lowes 4. Rea 5. Rinaldi.

With 13 laps remaining, Bautista had increased his lead to 0.5s. Toprak was doing all he could to stay with the Ducati, and set a new fastest lap of 1:37.890. Would we see team orders come into play, forcing Lowes to let Rea through? The GRT Yamaha team mates, Gerloff and Nozane, were having a disappointing weekend and found themselves way down in 16th and 17th.

With 11 laps remaining, Bautista was once again ramping up the pace and set the new fastest lap of the race with a 1:37.789. He now held a gap of 0.8s to Toprak, who was doing everything he could to keep in contact. Meanwhile further back Locatelli (Pata Yamaha), came through on Redding into 9th. Bassani had caught the Honda team mates of Vierge, and Lecuona in 6th, and 7th respectively.

Over half distance now, and Bautista had increased his lead to 0.9s to Toprak. Bautista then put in the new fastest lap of the race with a 1:37.660.

With only 4 laps to go, Rea did come through on Lowes into 3rd, Lowes didn’t try to respond, knowing his team mate needed the extra points. Rea wouldn’t be able to catch Toprak who was well away. There was then a three-way battle for 5th between Rinaldi, Vierge, and Lecuona. Meanwhile, Bassani was given a long lap penalty for his earlier incident with Baz, which he failed to take, and was subsequently given an additional long lap penalty. He rejoined the race down in 20th.

It has been an amazingly dominant season for Bautista, who has now finished on the podium in 27 of 30 races so far.

Next stop is Round 11 in Mandalika, Indonesia, and Bautista will be the World Champion if he outscores Toprak by 18 points, and Rea by a single point.