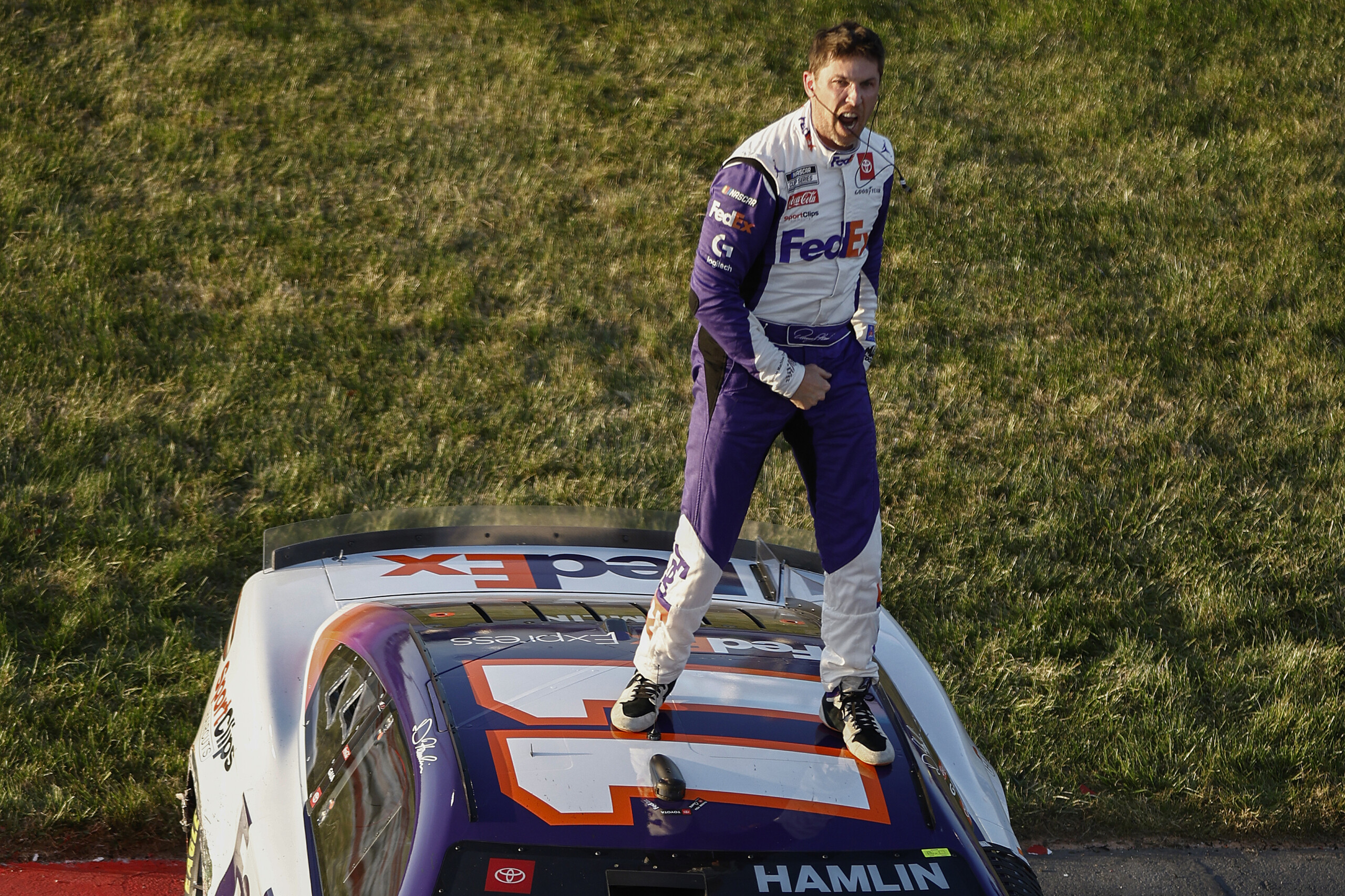 Denny Hamlin took the lead with five laps to go and held off Kevin Harvick to win his fourth Richmond Cup race in his native state of Virginia.

NASCAR’s Toyota Owners 400 race came down to a split strategy showdown in the closing laps. Third place Denny Hamlin and fourth place Kevin Harvick were on a two stop strategy for the final stage of the race while leaders William Byron and Martin Truex Jr. had split the final stage in half.

As sun began to set and the laps got down to single digits, Hamlin was catching Byron by a second a lap, with Byron being on much older tyres. Byron had held a four second gap over Truex Jr with 25 to go but this began shrinking significantly inside 15 to go. Hamlin flew by Truex with six to go and sped by Byron on the inside on lap 396 of 400 to take the lead away. Harvick did appear to be catching Hamlin with two to go but after Harvick’s Stewart-Haas Racing teammate Aric Almirola got out of the way on the back straightaway on the final lap, Hamlin set sail for the checkered flag.

After a roller-coaster start to the season, this was not just Hamlin’s first win of the year but his first top-10 finish of the season after seven races. This was also Toyota’s first Cup win of the season and was rather appropriate being the title sponsor of the race.

There were nearly more green flag pit stop cycles completed today than the first six races combined. Long green flag runs is often the way with Richmond and Sunday’s race was no exception. This gave extra weight to the two stop versus one stop strategies that played out during stage two and the final stage of the race but ultimately fresher tyres came out on top; partly due to Truex Jr. and Byron wearing each other out and faster lap down cars on fresher tyres taking away the inside lane that they wanted to run, allowing Hamlin and Harvick to gain more time on them.

It was a stellar day for the Joe Gibbs Racing Toyota’s overall with all four running in the top seven at one point. Truex Jr. had worked his way to the front from the drop of the green flag and won stage two on the one stop strategy, the same strategy that arguably cost him the win in addition to getting stuck behind the wake of Byron’s Hendrick Chevrolet for the last 100 laps. This is despite being on 10 lap fresher tyres.

Kyle Busch had worked his way to fourth but was black flagged with 50 laps to go for having tape over his grille that cost him a top-5 finish. Kyle Busch’s crew chief claimed the tape had been on there for 200 laps and were frustrated with NASCAR’s call in forcing them down pit road to remove it. Christopher Bell had led the field in the second quarter of the race and came home sixth.

The first quarter of the race was the Ryan Blaney show however. After securing the pole he led the first 100 laps and won stage one with Byron finishing second, before losing the lead in stage two. Last week’s winner Ross Chastain did not make friends with Blaney during the race. While fighting inside the top five towards the end of stage two, Blaney drove up alongside Chastain and pushed the watermelon man up the race track in turns three and four. Chastain returned the favour and pushed Blaney into turn one before Blaney veered to the right to a loss of grip and Chastain retook the position. Blaney had the final laugh as he gave Chastain a little shot into turn three late on in the race in and got by.

Team Penske teammate Joey Logano had made it up to second halfway through the race but the team’s jack became jammed underneath his car and would lose track position and only manage to recover to a top-20 finish.

The Roush Fenway Keselowski racing car’s of Brad Keselowski and Chris Buescher had a good outing and were fighting for a top-10 spot for much of the race.

There would be a couple of crashes during the race. Lap 245 would see an caution a few laps after the start of the final stage due to a crash between Cody Ware, Erik Jones and Ricky Stenhouse Jr that left all parties upset. On lap 260 there would be another caution after contact between Austin Cindric and Cole Custer, causing Cindric to spin out. This was triggered after Ty Dillon had washed up into Custer in turn two as he came slightly down.

Part two of the Virginia tour takes place at Martinsville Speedway under the lights this Saturday night; another track that Hamlin has had great success at, winning five Cup series races at the half mile paperclip.