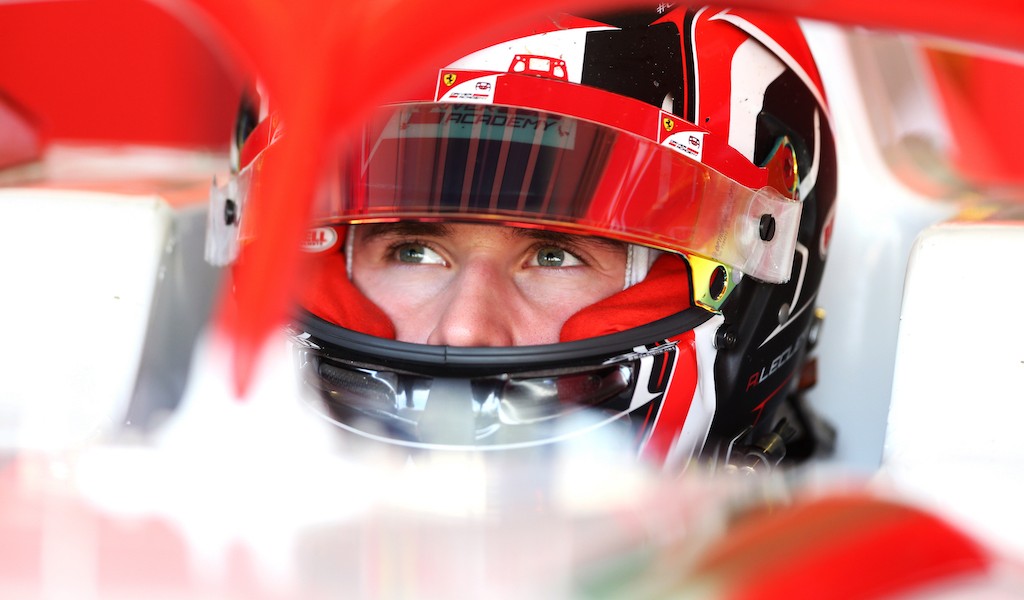 Prema has announced that Arthur Leclerc will join their FIA Formula 3 team for the 2021 season.

Leclerc, a member of the Ferrari Driver Academy and young brother to Ferrari Formula 1 driver Charles, enters F3 after finishing runner-up in this year’s Formula Regional European Championship, also with Prema. Leclerc took six wins and eight poles to contend for the title, but a retirement in the final round left him unable to challenge eventual champion Gianluca Petecof.

In preparation for his move to F3, Leclerc has also driven for Prema in both of the post-season F3 tests at Barcelona and Jerez.

“I am really happy to announce that I will step up to FIA F3 with Prema Racing next year,” Leclerc said. “It will be a completely new challenge for me, a lot more drivers on the grid and a weekend format that looks really exciting! I can’t wait to start the season.”

Prema team principal René Rosin said: “I am delighted to welcome Arthur to our FIA Formula 3 operation. He experienced a high quality season in 2020, ending up with more wins than anybody else in the Regional championship.

“His skills come with a dedicated approach to the hard work behind the scenes, which is clearly what we are looking for at this level.”

Prema have confirmed that Robert Shwartzman will remain with the team for the 2021 Formula 2 season.

Shwartzman joined Prema for his rookie F2 campaign this year after winning the Formula 3 title with them in 2019. He finished the 2020 season fourth in the standings with four wins—the most of any driver in the field—and helped Prema to secure the teams’ championship alongside teammate and drivers’ champion Mick Schumacher.

“I am happy to race in Formula 2 with Prema again in 2021,” said Shwartzman. “Our target as a team is obviously to win and make progress in terms of results, working hard and improving the car.”

Prema team principal René Rosin said: “We are delighted to extend our relationship with Robert into the 2021 season. He has a truly rare talent, and we are looking forward to seeing him take another step next year.

“In 2020 he immediately proved he could run for wins, and we want to build on that immediacy to be consistent contenders in 2021.”

Shwartzman will be joined at Prema next year by reigning F3 champion Oscar Piastri, and both drivers will represent the team this week during post-season testing in Bahrain.

Prema Racing have announced that Oscar Piastri will step up to Formula 2 with the Italian team next year.

Renault junior Piastri had been set to graduate to F2 after winning the Formula 3 title with Prema earlier this year, beating rivals Theo Pourchaire and Logan Sargeant in the final race at Mugello.

It is expected that Piastri will take the place of Prema’s current driver and F2 championship leader Mick Schumacher, who is widely reported to be joining the Haas F1 team for 2021.

Piastri will also take place in the post-season F2 test in Bahrain next week.

“I’m super excited to be racing with Prema in the FIA Formula 2 championship,” Piastri said. “We had a very successful 2020 season, winning the Formula 3 championship together, and I’m hoping for another successful year with them.

“Prema has proven to be the team to beat once again in F2 this year, so I’m extremely happy to be moving into the championship with them.”

Prema team principal René Rosin said: “We are delighted to welcome Oscar to our FIA Formula 2 team. Having witnessed his progress and success throughout the 2020 season, taking our relationship to the next step for the 2021 FIA Formula 2 Championship felt like the natural thing to do and we look forward to having him on track right from Bahrain.”

Prema has yet to announce whether Schumacher’s current teammate Robert Shwartzman, who sits fourth in the F2 standings with four wins, will remain alongside Piastri for next year.