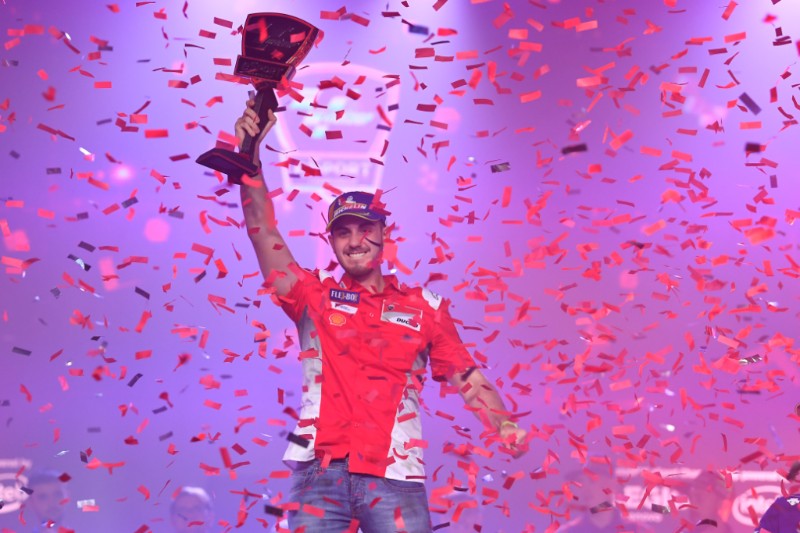 After several rounds of qualifying and two semi-finals, the twelve fastest MotoGP 18 riders arrived in Valencia for the final of the 2018 MotoGP eSports Championship.

The start of the ten lap race was extremely action-packed, with two riders going down before the first two turns: Cristianmm17 dropping the Repsol Honda in turn one, before Davidegallina23 crashed the Angel Nieto Team Ducati on the exit of the first turn. It was unclear from the cameras, but it seemed like contact may have been involved in both of these incidents. This isn’t surprising with such a tightly-compacted group going into the opening corners, and the pressure involved in a situation like this too; a pressure which was only heightened by the addition of Marc Marquez in the commentary box.

From an early stage, it was clear that Trastevere73 and EleGhosT555 had a pace advantage on the field, maybe with the exception of AndrewZh. The gap between the Ducati Team rider and the EG 0,0 Marc VDS pilot went back and forth for the entire race, and it never looked like any other rider could get involved.

What became clear were three things: track limits, with all riders looking to maximise their lap time; the pace between all the riders was very close, as had appeared in qualifying; and that in turn caused overtaking to be extremely tough. Especially because of the incredibly short braking zones, and the high amount of time the riders were spending on the side of the tyre, at maximum lean angle.

From experience playing this year’s MotoGP game, I can say that it is not possible to brake a little bit later than your limit because you lose the front very fast and have no chance to save it. Since these riders were on the absolute limit (the front tyres were completely locked for 20 metres or more on almost every corner entry), braking later was not much of an option. The slipstream effect also seemed almost completely negligible from more than a bike length or two. So, the riders found it difficult to get alongside one another in a straight line to make a pass. EleGhosT555, therefore, spent the entirety of the MotoGP eSports Final staring down the virtual exhaust pipe of Trastevere73, unable to do anything about it.

So, with a lights to flag win, Trastevere73 took the second MotoGP eSports crown in history, and the second of his career. If you like, it was also Ducati’s first MotoGP World Championship since 2007, and their first win at Valencia since 2008. It also seemed like a precursor to Sunday’s premier class race, which Andrea Dovizioso won for Ducati to end the 2018 season.
EleGhosT555 was just 0.298 seconds away from the MotoGP eSports crown in second place, ahead of AndrewZh who completed the podium.

eSports tends to get flack from some motorsports purists, but whatever your opinion on it, you cannot deny that the emotion is there. Trastevere73’s celebrations were a prime example of that. For a lot of people video games are just that: games, but for the elite players, who dedicate themselves to it, it is a way to show their talent. Now with MotoGP eSports it is possible for these gamers to showcase their skills on the world stage, in front of a live audience who are the same as them: MotoGP fans (as well as people like Marc Marquez and Paolo Ciabatti).

Tuesday saw the beginning of the 2019 MotoGP season, as preseason testing started for the premier class in Valencia, following the conclusion of the 2018 World Championship on Sunday.

There was plenty to see: the Ducati GP19 had been highly praised ahead of the test; Jorge Lorenzo (Repsol Honda) would get his first taste of the Honda RC213V; Yamaha had two new engine specs to try in their search for tyre life; Franco Morbidelli (SIC Racing Team ) took to the Yamaha M1 for the first time; Danilo Petrucci moved to factory Ducati; Johann Zarco moved to KTM, as did Tech 3; and there were four rookies getting the chance to try out MotoGP machinery for the first time.

However, things did not go the way the teams would have liked. The first part of the morning was unusable for them because of overnight rain. Zarco was the only rider to go out before the track dried, but only for a couple of laps.

Eventually, the track dried and the riders were able to get their 2019 campaigns underway.  Starting with Ducati, they did not manage to get much of anything done on the first day. Andrea Dovizioso spent the time he had making a base setting with the GP18, since he did not have the opportunity to run in the dry in the weekend. This was the same for everyone, of course, but the time Dovizioso spent on the 2018 bike meant he did not get to try the GP19 until Tuesday. It was the same situation on the other side of the garage, as Danilo Petrucci was acclimatising to his new box, and new team. That said, when they got around to the new bike, Dovizioso was enthused by what his team had discovered, and Petrucci essentially said the GP19 was perfect. Nonetheless, the next test in Jerez will be important for the factory Ducati team to confirm what they found in Valencia, and to determine their direction for the winter before Sepang.

Jack Miller (Alma Pramac Racing) was also highly impressed with the first version of the GP19, saying he couldn’t understand how it was derived from the GP17 he has ridden in the 2018 season. Miller noted that the biggest thing with the new bike compared to the 2017 Desmosedici was the ease with which the 2019 bike changes direction. They have only had one day on the GP19 so far, but already the three factory Ducati riders look strong for the new season.

The factory Yamaha squad’s entire focus over the course of the test was on the two new engine specs they took with them. On Monday, the focus was on an engine which they had already tried at Aragon. Both Valentino Rossi and Maverick Vinales were happy with the engine, especially Vinales who was particularly enthusiastic about the engine braking. Rossi reflected Vinales’ opinions, but was more realistic in insisting that there is still work for Yamaha to do before they’ll be in a position to fight consistently. A newer engine spec on the second day seemed indifferent to the one tried on Monday. Vinales could not decide which he preferred, whilst Rossi didn’t seem too happy with either of them. Whilst both of these engines helped in the engine braking, they were still not helping with the acceleration or the tyre life either. However, both riders were happy with the direction after a 2018 season plagued with technical issues.

Yamaha also had Jonas Folger out for his first MotoGP experience since September 2017. Whilst the German’s work in these two days was perhaps not so important, he could be critical for Yamaha come the middle of 2019.

Honda face a difficult winter, and Valencia was the beginning of that. Marc Marquez is injured, as is Jorge Lorenzo (who is new to the bikes) and Cal Crutchlow (LCR Honda) who may still be unfit come the Sepang tests in 2019. Stefan Bradl was on the LCR Honda on Tuesday, but was just testing different suspension, whilst Takaaki Nakagami (LCR Honda) got his hands on 2018 HRC machinery, and was somewhat taken aback by the progression made from 2017 to 2018. Marquez was limited in his track time, due to that injured left shoulder, but had three bikes to test. One was the 2018 spec, there for comparison, and then he had two black bikes, which were 2019 prototypes. Marquez couldn’t say much of his testing, but it seemed as though at least one new engine spec was there for him to try. There was also a new chassis for Marquez to try, but because of limited track time, he and Honda will need to use the Jerez test next week to confirm their feelings from Valencia.