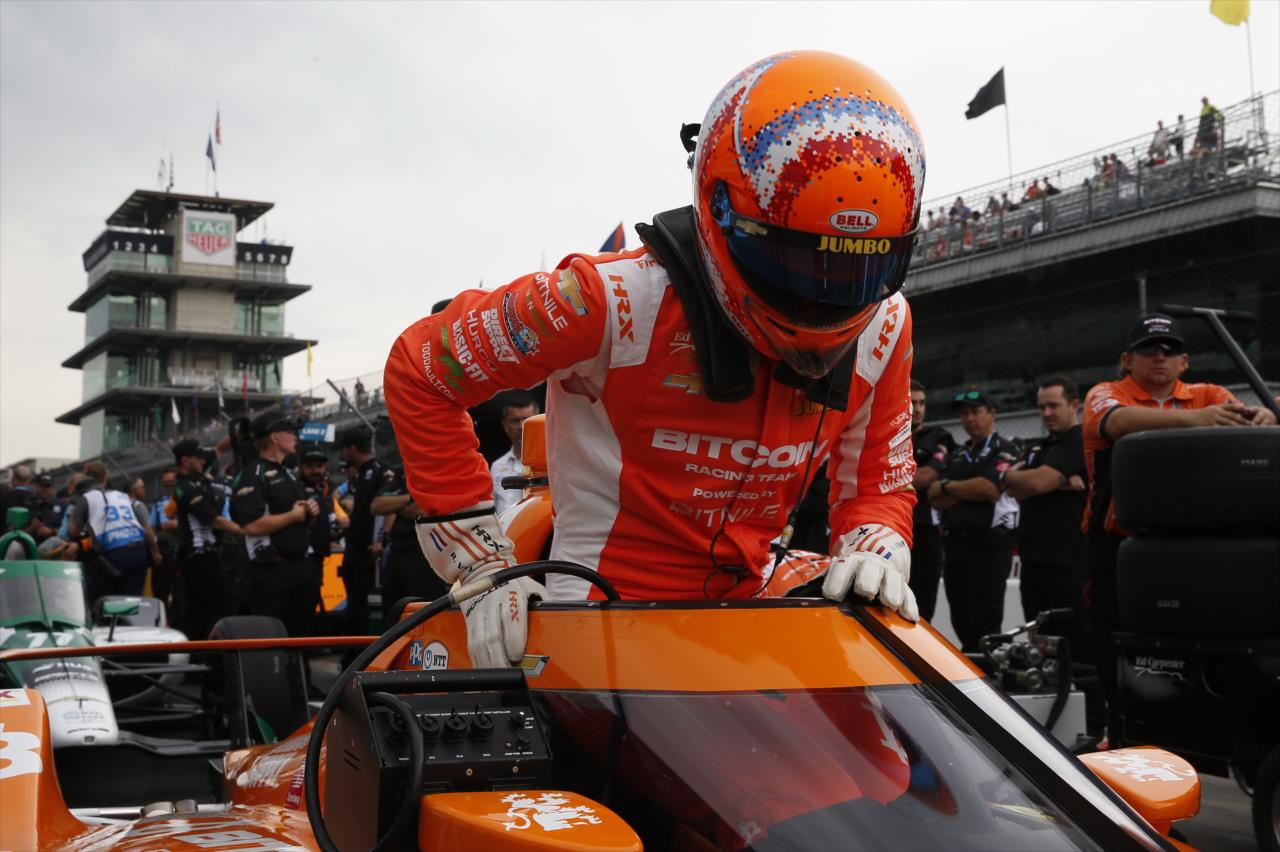 Rinus VeeKay set the third fastest qualifying run in Indy 500 history with a 233.655mph average in his Ed Carpenter Racing Chevrolet at the start of the day going fastest, while Takuma Sato, after having his time deleted for track interference with Marco Andretti, saw him whack the turn two wall but stayed in the throttle and went 12th fastest, securing the final spot for Sunday’s fast 12 qualifying session.

While there would be no bump day as part of this year’s Indy 500, due to only having 33 entries for the 106th running of the Indy 500, day one of qualifying set positions 13 to 33 and decided who would make Sunday’s fast 12 and have a chance at making the fast six and the Indy 500 pole. Multiple attempts to qualify were cut short due to storms with drivers Scott McLaughlin and Josef Newgarden taking to lane one in an attempt to make the fast 12 in time but failed to do so.

VeeKay was the second car to go out for his first qualifying run in favourable conditions as the track was cool and the air thin. He set a blistering first lap of his four-lap qualifying run with a 234.7mph average. Talking to NBC, VeeKay said the car was “very comfortable to drive.”

Sato had his first lap deleted that had put him in the fast 12, after failing to stay off the racing line on his cooldown lap as Marco Andretti came round to begin his run. On the second attempt on lap two, the two-time Indy 500 winner banged square on into the turn two wall but kept his foot in the throttle, barely losing any speed going 12th fastest with a 231.708mph average, knocking out rookie David Malukas from the fast 12. Sato said to NBC: “It’s qualifying, you just keep going.”

The Arrow McLaren SP’s of Pato O’Ward and Felix Rosenqvist went second and third fastest, after going out first and fourth in the session.

Three-time Indy 500 pole winner Ed Carpenter went seventh fastest despite the hotter track temperature but was forced to lift going into turn three on his final lap as he reached 241mph. Romain Grosjean, after having a difficult would be the surprise lone Andretti Autosport driver to make the fast 12 going ninth fastest in his first ever Indy 500 qualifying run, while 2018 Indy 500 winner Will Power would be the only Team Penske driver to make the fast 12, going 11th fastest after using every inch of the track to do so.

Overall though, it would prove to be not the best of days for Andretti Autosport and Team Penske. Colton Herta’s engine shut off on his first qualifying run, forcing the team to do a lengthy engine change before sending him back out later in the day where he only managed to qualify 25th. Alexander Rossi was not happy with his race car, describing it to NBC as “horrible”, and qualified 20th.  Marco Andretti qualified 23rd and rookie Devlin DeFrancesco qualified 24th.

Team Penske’s Scott McLaughlin withdrew his 15th qualifying position to take lane one for a second attempt but with less favourable conditions, the gamble did not pay off and instead qualified 26th. Josef Newgarden was lucky to keep his 14th qualifying position after lightning brought out the yellow flag on his second qualifying run after also using lane one, ending the session early. As a result, he was able to retain his position.

Two-time Indy 500 winner Juan Pablo Montoya, in contrast to his Arrow McLaren SP teammates, had a rough qualifying session. Montoya’s car failed pre-qualifying inspection and had to forfeit his first qualifying run. When he did attempt to qualify, he was not on pace saying on the radio the car was “horrible” and “hard to drive”, only qualifying 30th.

Four-time Indy 500 winner Hélio Castroneves, after qualifying eighth last year with Meyer Shank Racing before going on to win the Indy 500, could only manage 27th.

Stefan Wilson was unable to get out to qualify due to engine trouble and consequently will start last for next weekend’s Indy 500.