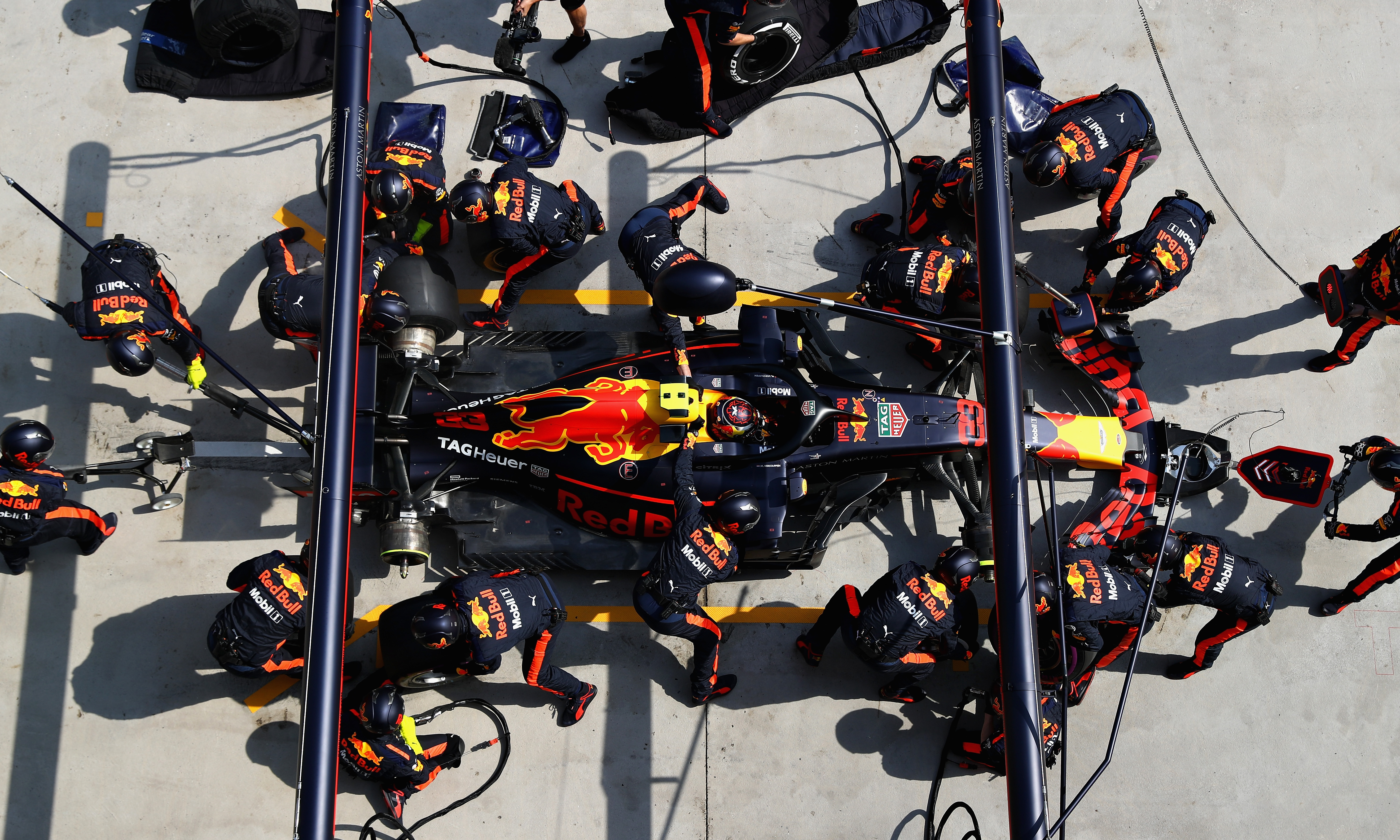 2018 is turning out to be the an exciting season. For the first time in the hybrid era it has been three races since the Silver Arrows last jumped on the topstep. China tends to be a race with very few retirements but safety cars aplenty and it was a factor today. 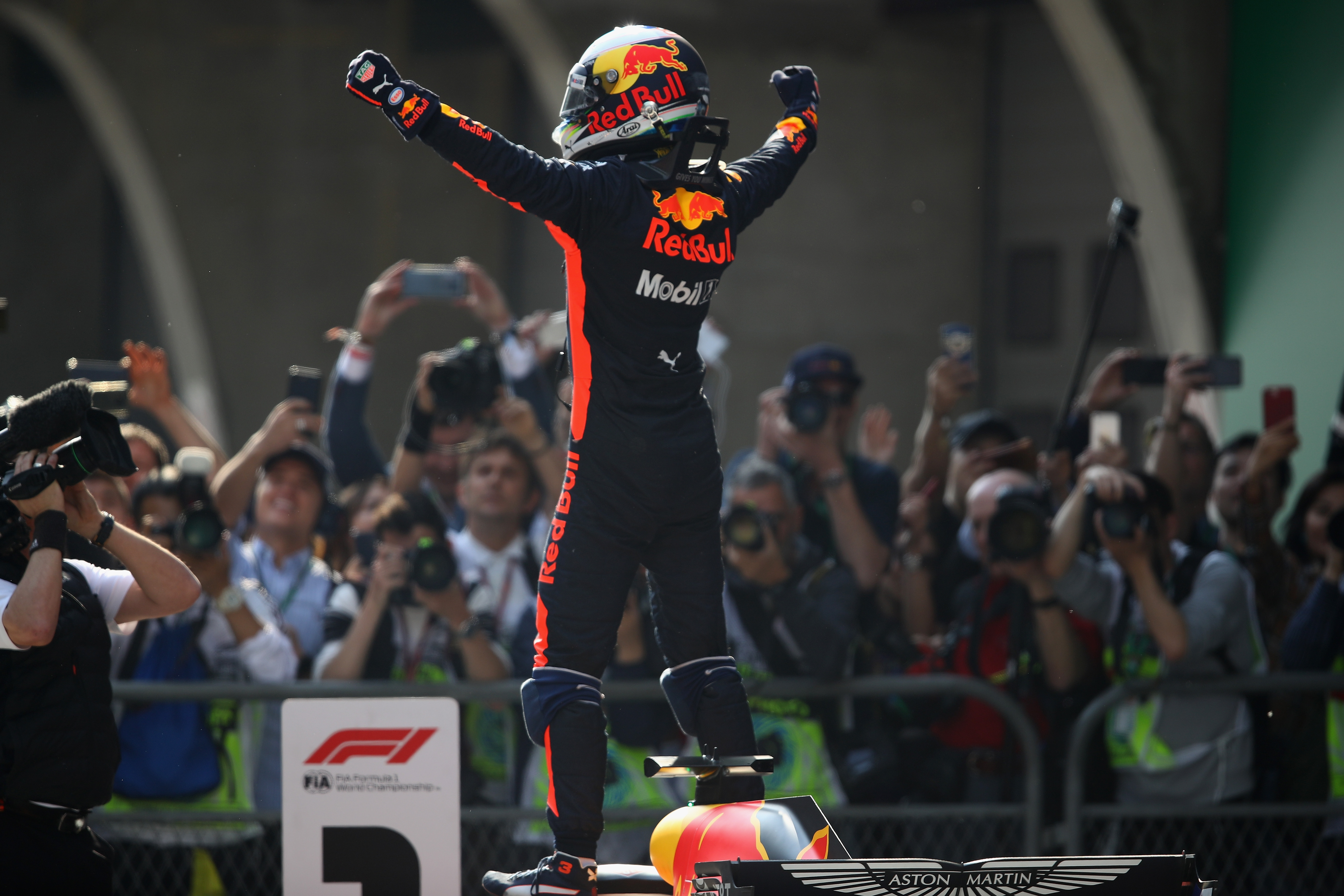 He never wins a boring race, a stat that shows this is that he has never won a race from starting in the top three. ‘Sometimes you’ve got to lick the stamp and send it.’ That is what he said on the podium after his moves, especially on the divebomb from far back on Hamilton at turn 14. He was sixth at the restart, and through some great moves he finished first. Once he got through the field he pulled a gap and was never seen again. It is the first shooey of the season, some more to follow?

Flying the flag for Mercedes in the race, the Finn got a great start managing to jump one of the Ferrari’s. He kept it behind him and didn’t let the other get away. This allowed him to a great outlap to undercut the Ferrari to get the lead and control the race. His tyres lost him the lead but kept the other Finn behind him for a great second place considering had the second best car. 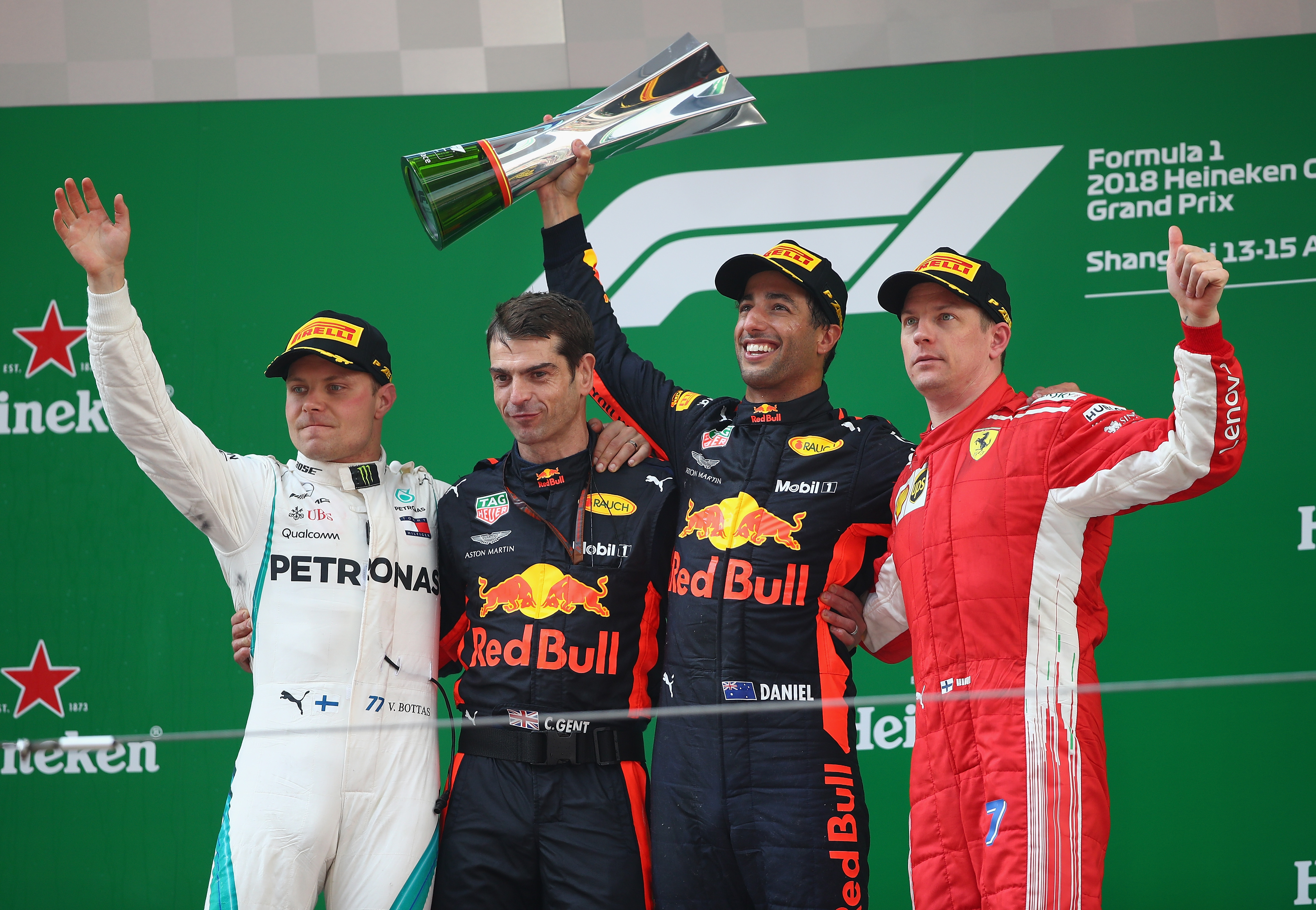 He got screwed by his team, Ferrari seem to be putting all their eggs in one basket with Vettel. It isn’t always going to work if they do. Kimi was a bit fortunate with the timing of the safety car after losing around 15 seconds to Hamilton after being left out there by the team. Had tyre age on his side to allow him to pull some passes off and finish on the podium. Spoilt today with a a few words on the podium too!

It was a grumpy Lewis Hamilton day much like Bahrain, he was never happy. ‘Is it me or there a lot of cars with fresh tyres behind me’ was a quote in the race. This was a clear shot at the team as was left in no mans land. He was just behind the others all weekend, with everything happening around him he closes the gap on his championship rival. Two races though not on the podium for the Brit.

Patience, that is what the Dutchman needs more of, we all know he has the speed. Twice in one race he made mistakes on overtaking. First, on the outside of Hamilton where he could of waited for the DRS rather than losing places to Ricciardo. The second being the half gap on the inside of Vettel for the following lap as time was on his side. He would of probably won the race if he kept it clean but instead fifth due to a penalty. Unlike Bahrain he admitted it was his fault, think a talk with himself tonight needs to be done. 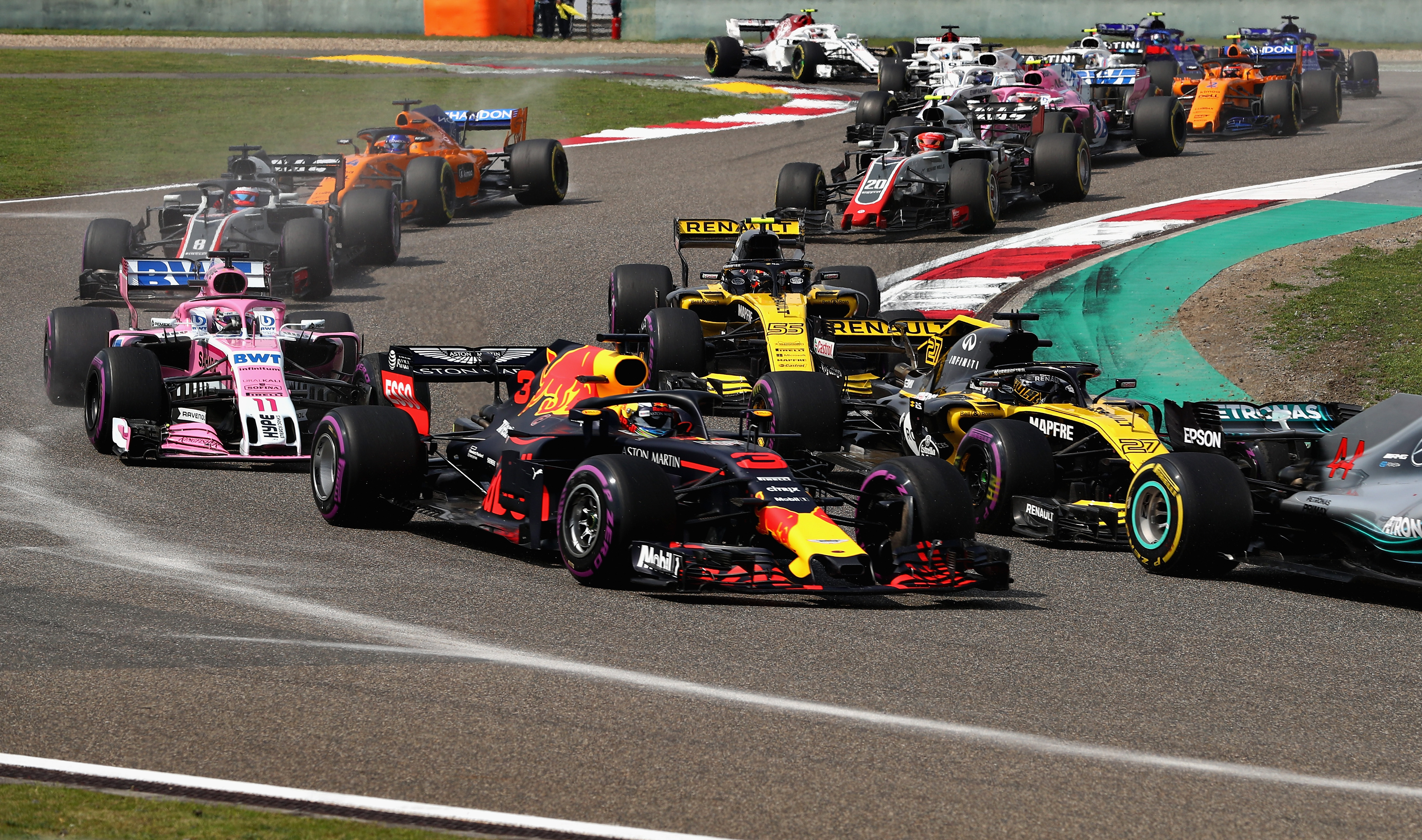 Once more this German is so under rated, with contracts up in air at the end of this season surely teams have to take a note. He has never been on the podium but consistently in the points and keeps it clean unlike others. Another strong day for him that puts him firmly as the number one driver at Renault.

Ringing the neck out of his car, finding the pace which his team mate cannot. His racecraft that he has only helps him further from starting so far back in the field. Kept tyres in good condition and his nose clean to push on. Nice move on Vettel late on to get even more points, due to a higher result is sixth in the standings.

Through no fault of his own the championship leader finished down in eigth. He started the race well and did his token fast first lap to break the DRS on second place. He managed the gap well to keep the field behind him which was brilliant. The team kept him out too long which as a result allowed Bottas to jump him, and then running wide at the hairpin gave the aggresive Verstappen a gap that he would attempt a pass causing a spin. He lit the rears up when trying to get back pointing in the right direction which hindered him for the remaining laps. Had the pace but others hurt him.

Very much in the shadows of his team mate currently, he needs a big display. Nearly got the stricken Ferrari at the end of the race but more points for him, albeit another finish far behind his team mate.

Said he was lucky to just miss out on Q3. He qualified eleventh allowing him to have first choice of tyre. He went with the soft and slowly picked off the positions, undercuts pushed him back to further down the field though, more points for the American team.

An okay race for Ocon, he finished higher than he started which is something good to take for him. Hope for the team at Baku when they were strong last year but keep it clean!

The Mexican well renowned for his skill to keep life in his tyres you’d have thought would thrive in these conditions. A result from probably being one of the ten to go through into Q3 he was not helped by starting on the ultra soft tyres. The damage was done as went long on second stint and had no pace throughout.

The Belgian is in the same boat as Carlos Sainz, playing second fiddle to his team mate. Mclaren seem to be talking a lot of gas and air when it comes to the performance of their car, but Vandoorne isn’t getting what his team mate can out of it. This time drivers’ didn’t retire so finished out of the points.

A great start for Stroll today, quite a few positions picked off at the 270 degree turn one. Williams had a bit more pace this weekend albeit being slower than last year in qualifying. Solid midfield finish, confidence can be built as we head into the European season.

Is growing into the seat but questions continue to be asked if signing him was the correct decision. Is learning the car well, and gaining confidence. Not much was said about him throughout the race.

Good finish for Marcus, showing his rookie team mate that there is more potential in the Sauber Alfa Romeo. Peope saw him as a pay driver as they dropped the impressive Wehrlein over him but mixing it in the midfield and not always coming out second best.

Besides the few explicit words on the radio early on in the race when it seems the team said to let his team mate through Romain had a very quiet race. Getting into qualifying three seemed to hinder him. Forget and move on, but take confidence pace in the car is there.

It was the Frenchman’s eigth start and that showed, a bit of a yo-yo season thus far. Toro Rosso struggled with China very power concentrated track. He took out his team mate causing the safety car and ruined both races for the team. Gone back to Australia, want to keep the Bahrain-esque form up. Very silly, but he’ll learn from that.

For a driver that had never been to China he wasn’t adrift of the field, of course there are simulators that can be used but great display. The European season is when Leclerc will come to a next level.

The car wasn’t at the races today and was pretty much held back. The Kiwi was doing his own thing before being a passenger to a collision with his team mate. Had to retire late on due to damage.

Two things to conclude really, Verstappen, we rave how exciting he is to watch but he needs to learn. One of the late great Ayrton Senna’s quotes ‘If you no longer go for the gap that exists, you are no longer a racing driver’ can be used to defend him. I don’t even think that he would of attempted that optimistic move.

Gave Ricciardo the driver of the day, but a big shout out to the Red Bull team for the whole of the weekend. A record breaking engine change in this era yesterday, and the two double stack pit stops really shows drive in the team to do the best they can at the track. Off track great tactics was decided in a few seconds when the safety car was called too. In a fortnight the Formula 1 circus is off to Baku, much earlier this year.