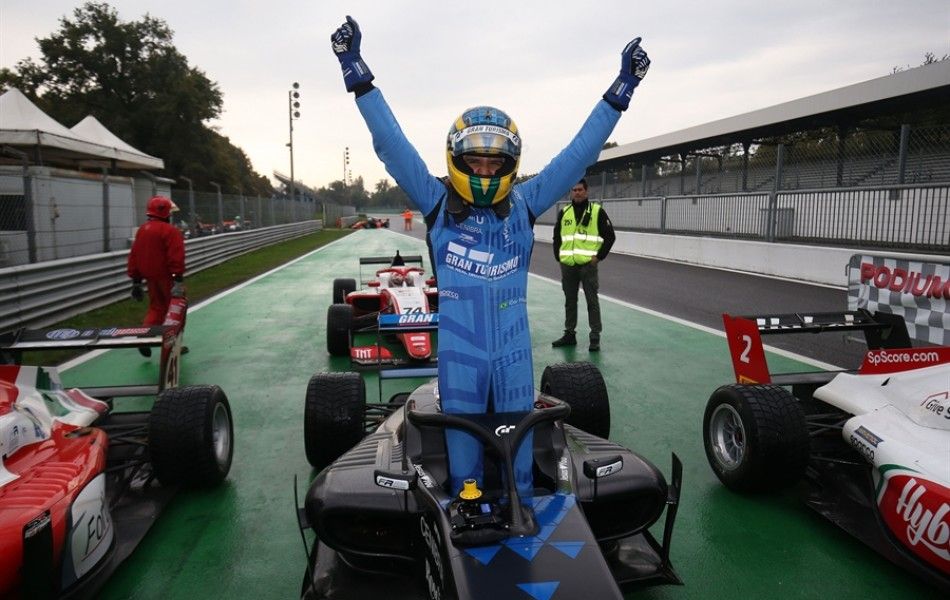 For 2019, Igor Fraga competed in the inaugural Formula Regional European Championship, an F3-level series which competed in Italy for the most part with rounds also in France, Spain, Hungary and Austria.

The season was dominated for the most part by Prema with their trio of drivers consisting of Frederik Vesti, Enzo Fittipaldi and Olli Caldwell.

Fraga was undeterred, and with his team of DR Formula by RP Motorsport, he took four wins, four poles, three fastest laps and eleven podiums in 23 races, ending the season an incredibly impressive third behind Fittipaldi and champion Vesti.

Back in the virtual world, things went a little sour. The new format of the Gran Turismo championships meant that if you won overall in one particular event, you wouldn’t have to go qualify to participate in the World Finals at Monaco. After messing up his chances in the first round in Paris, he won the second event which took place at the Nürburgring supporting the 24-hour race. However it was the following event that really put a major downer on things.

The third event took place in New York and Fraga, having already guaranteed himself a place in the World Final, was racing in the event final against Mikail Hizal. They were driving at Spa and Hizal had better tyres. With the long drag from La Source all the way to the Kemmel Straight, it looked like a foregone conclusion that Hizal would pass Fraga.

However, Fraga first employed a tactic of getting off the throttle and letting Hizal through after La Source, only to immediately use the slipstream and get back past, which is tad sketchy but not inherently illegal.

Then he did something which really was wrong. He lifted off the throttle going up Eau Rouge and Hizal couldn’t avoid hitting him. After that, Hizal had to preserve fuel and dropped back by over five seconds. That last part is important.

Fraga was penalised. Although he didn’t actually lose anything, he was given a five-second penalty and kept his victory.

Three weeks later, and round four of the Grand Turismo championship took place at the Red Bull Hangar-7 in Austria. The debate was still centred on Fraga’s move in Italy, but to their credit, both Fraga and Hizal had taken to social media to address it. Fraga apologised, and Hizal encouraged people not to attack him, insisting he had learned from his mistake.

I had gotten into a bit of a war of words over Twitter regarding the incident with both Gran Turismo championships regular Fabian Portilla and also David Perel, a real-world driver who frequently plays Gran Turismo. Perel insisted that because it was not real-world racing and that there was no inherent danger, it meant doing such a thing was okay.

Nonetheless, Fraga participated in the GT World Finals, and to everyone’s shock, he spun out of contention in his semi-final and didn’t even make it into contention for a repechage race, unable to retain his crown. However, there was still the Manufacturers Series, a secondary competition where three drivers sign in-game with a manufacturer prior to each live event and the ones who qualify represent that manufacturer.

Fraga, alongside Tomoaki Yamanaka and Rayan Derrouiche, represented Toyota, and they became Manufacturer Series champions. This probably didn’t soften the blow of not being able to have the chance to defend his Nations Cup crown, which was won in the end quite fittingly by Mikail Hizal.

For 2020, Fraga was announced to be competing in the F1 Grand Prix-supporting FIA Formula 3 championship with Charouz Racing System, alongside F3 regular Niko Kari and fellow Formula Regional graduate David Schumacher. This was immediately generating headlines with the official F1 website crediting Fraga as ‘F1 Esports finalist joins F3’, but there was also what would come even before turning a wheel at an F1 Grand Prix.

It was announced that in preparation for the upcoming season, Fraga would participate in the New Zealand-based Toyota Racing Series, which is designed to keep drivers who usually compete in Europe sharp over the winter when there is no racing. The series has been won in the past by drivers such as current Jaguar Formula E driver Mitch Evans, and also current F1 drivers Lance Stroll and Lando Norris. Igor was placed into the M2 Competition team with the previous season’s champion Liam Lawson, and he really surprised everyone.

He really held his own against Lawson, going toe-to-toe with him when everyone was expecting the New Zealander to dominate. Lawson ended up winning five times to Fraga’s four, but due to Lawson’s one DNF and Fraga scoring in every round, Fraga ended the season as champion.

Not only that, Fraga won the New Zealand Grand Prix, an illustrious race that is one of only two races outside F1 to hold the title of a national Grand Prix along with the Macau Grand Prix. He did so whilst the first event of the 2020 FIA Gran Turismo championships was about to start just across the Tasman Sea in Sydney, Australia.

In spite of everything that may be thrown in the direction of Esports by racing ‘purists’, we have a fine example of how virtual racing can really open up doors of opportunity.

It all began for Fraga when his dad bought him Gran Turismo 4 on PlayStation 2 with a cheap wheel and pedals for him to practice on between sessions in his go-kart.

Yes, Fraga is not the prime example of what you think of when you hear ‘gamer turned racer’. He has a background in motorsport before getting involved in sim racing so he isn’t like GT Academy graduate Jann Mardenborough.

But before F1 Esports, the Gran Turismo Championships and McLaren Shadow Project final, Fraga did not have much chance of racing in Europe and thus pursuing his F1 dream. Now, however, he is a step closer to that. Especially now it has been confirmed he will be joining Red Bull’s junior program!

Fraga is an exciting driver who has proven that he isn’t just a PlayStation gamer looking to mix it with the big boys. He’s a racing driver first, and has proven that gaming and sim racing are not just a gimmick.

Just after he won the 2018 Gran Turismo World Championship, a video was released on Fraga’s YouTube channel which really does encapsulate the brilliance of everything:

Driving is for everyone. Whether you race karts at the weekends, or you’re a professional who is paid to race, or even if you drive digital versions of them, the beauty of racing is that it is well and truly a universal language. More than ever, we are seeing more people picking up online racing to fuel their desire to compete. It’s creating more opportunities than ever before, and that shouldn’t be dismissed.

I see so much in the way of gate-keeping in regard to Esports. Whether you like it or not, it’s an inexpensive alternative to real racing and it is here to stay. It’s up to you whether to embrace it or not, but you can’t deny it isn’t already proving its worth.

We have had Formula E doing a one-off sim race in Las Vegas with both sim drivers and regular-series drivers going head to head for a cash prize of $1,000,000. This was won by now-McLaren Shadow driver Bono Huis ahead of Felix Rosenqvist, who raced at the time for Mahindra in Formula E.

The Race of Champions opened up an event for sim racers to participate in in 2018, in which also now-McLaren Shadow driver Enzo Bonito won. He made headlines a year later when he raced and defeated former Formula E champion Lucas di Grassi and former IndyCar champion Ryan Hunter-Reay in their heat races.

Red Bull F1 driver Max Verstappen and McLaren’s Lando Norris both like to participate in big iRacing endurance races too, having taken the win at last year’s iRacing Spa 24 hours even if Max’s broken brake pedal tried to sabotage that! Many other top-line drivers are also starting their own Esports teams, including Fernando Alonso, Jean Alesi, and even Jean-Éric Vergne who along with his old Carlin F3 teammate Rupert Svendson-Cook are the founders of Veloce Esports, who run the Esports teams of both Alonso and Alfa Romeo F1.

Jann Mardenborough is also worth a mention. He entered GT Academy when taking a gap year before university, and ended up winning it. As a result, he has driven cars including Nissan GT3s and various single-seaters, won a GP3 race in 2014, took a class podium finish at the 24 hours of Le Mans, and he nearly won championships in the Toyota Racing Series and Japanese F3. He’s now racing in Japan having competed in Super Formula and now mainly Super GT.

Finally, the FIA recognised the potential of virtual racing by giving certified status to the Gran Turismo championships and also by including it in the Olympic-style inaugural FIA Motorsport Games.

I’m British, so I was following Team UK’s entry into the Digital Cup. James Baldwin was our representative, but that’s an article for another day.

I hope you all feel compelled to seek out some virtual racing, whether it be to watch or to compete yourself. I hope I’ve convinced at least one person who wasn’t already convinced by Esports to check it out, and if so then that would be mission accomplished as far as I am concerned.

Especially with the cancelled motorsport events, it has been Esports that has come to the rescue! Veloce Esports and The Race have organised events that took place last Sunday which featured big names from the world of motorsport, and no doubt will there be more over the next few months.

I am certain that in the next couple of years, we will find an F1 champion or a 24 hours of Le Mans winner who started out in gaming. Whether that’ll be Igor or someone else entirely, they are bound by nothing.