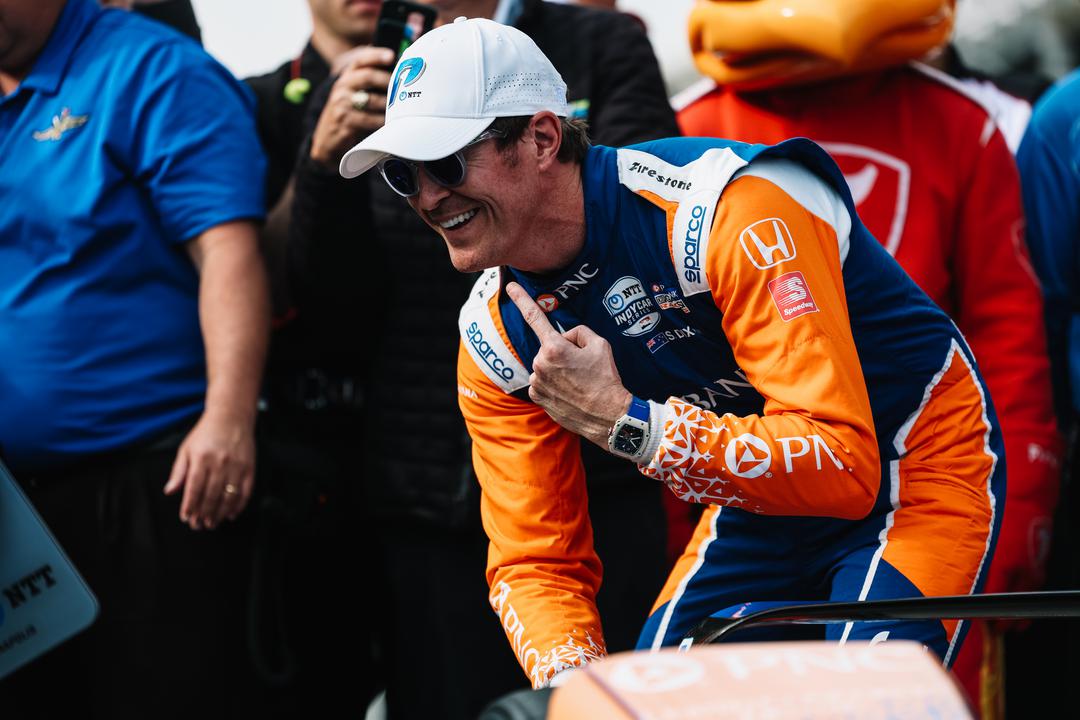 Dixon was the last car to go out in the fast six and had teammate Alex Palou’s four-lap average of 233.499mph to beat for the pole. Dixon not only managed a 234mph plus average on his first lap but also his second with averages of 234.437mph and 234.162. The Chip Ganassi Racing driver earned back to back poles on Sunday, and is now second for all-time Indy 500 poles, only behind Rick Mears’s six.

Instead of the usual fast nine qualifying format, pole day was decided by two qualifying sessions that is used during the rest of the IndyCar season, the fast 12 followed by the fast six, for the first time.

In the fast 12, Jimmie Johnson, in turn one on lap one, understeered before getting a snap of oversteer and was mere inches from hitting the wall before evasively driving away from the wall in the short shoot. Johnson’s first lap was a 229.911 but by pedalling the throttle, came back to earn a four-lap average of 231.264mph, qualifying 12th. Johnson said to NBC that he had wanted to run full throttle for the entire first lap but the “tricky conditions” and “inexperience” caught him out.

Will Power, the sole Team Penske driver to make the fast 12, qualified 11th with a 231.534mph average but nearly hit the turn one wall twice on laps one and three. Sato qualified 10th with a consistent run of 231.670mph.

Romain Grosjean nearly smacked the turn one wall on lap two and appeared to be running light on downforce. The Indy 500 rookie managed to qualify 9th with a 231.999mph average. Talking to NBC afterwards he said “that was scary.”

The fight for making the fast six was very much on for the Arrow McLaren SP drivers of Felix Rosenqvist and Pato O’Ward. Rosenqvist’s tricky handling Chevrolet managed a 232.182mph that initially put him sixth but O’Ward went faster with a 232.705mph average. Neither would end up making the fast six as Rinus VeeKay, the last driver to go out after setting the quickest four-lap average on Saturday, would go second overall after setting a four-lap average of 233.249mph including a first lap of 234.099mph.

The top six from the fast 12 would be made up of four Chip Ganassi Racing and two Ed Carpenter Racing cars. All of their times in the fast 12 had been in the 233mph plus average range. Tony Kanaan on a very consistent run did a 233.022mph average putting him sixth. Indiana native Ed Carpenter went fifth with a 233.073mph four-lap average including a first lap of 234.244.

Marcus Ericsson went fourth with a 233.166mph four lap average, Palou went third with a smooth run of 233.347mph and Dixon to nobody’s surprise went to the top with a 233.510mph four-lap average in what had been a very consistent run.

The fast six qualifying session was a battle between the Chip Ganassi Racing Honda’s of Dixon, Palou, Ericsson and Kanaan, and the Ed Carpenter Racing Chevrolet’s of VeeKay and Carpenter.

Despite the cooling conditions, and the increase in cloud cover, both Ericsson and Kanaan would go slower on their fast six runs, only managing a 232.764mph and a 232.372mph four-lap average respectively, qualifying fifth and sixth although Ericsson did have a super smooth run, making him a car to watch out for in Sunday’s race.

Carpenter would be incredibly consistent compared with his fast 12 time by completing a four-lap average of 233.080mph, putting him fourth overall.

The top three from the fast six would be VeeKay, Palou and Dixon. VeeKay was racing to be the youngest Indy 500 pole sitter in history but would have to settle with a third best average of 233.385mph. Palou went out and did a 233.499mph four-lap average including a first lap of 234.048mph, only to get beaten by Dixon’s recording breaking 234.046mph four-lap average.

Dixon, Palou and VeeKay will make up the front row for this weekend’s Indy 500, making it the fastest front row in Indy 500 history.

The next on track session for the IndyCar Series at Indianapolis Motor Speedway will be on Friday for Carb Day and the Pit Stop Competition, ahead of Sunday’s 106th running of the Indianapolis 500.

This weekend, the NTT IndyCar series take on the high banks of Texas Motor Speedway in the XPEL 375. The series has observed a long three week break after the season opener at St. Pete, only adding to the anticipation of three wide racing at over 200mph around the 1.5-mile oval. The drivers will complete 248 laps, making it a 372 mile long race, to be exact. This will be the 35th IndyCar race at Texas Motor Speedway, in the speedway’s 25 year history, with Scott Dixon and Pato O’Ward winning the 2021 races.

Texas has proven to be a very significant race as in three of the last four seasons, the winner has gone on to win the championship; five-time Texas winner Scott Dixon in 2018 and 2020, who is the all-time winner at the track, and Josef Newgarden in 2019.

Despite its wide turns, this track has little room for error. The 20 degree banked turns one and two are unforgiving as drivers who wash up the race track, coming off the racing line, often spin around upon entering the slippery grey tarmac and smack into the outside wall. Going two wide into the 24 degree banked turn three is only for the bold. Getting tight off turn four on the outside often results in slamming into the outside wall. Three wide along the back straightaway is not unusual to see. We may even see four wide in spectacular fashion like we did at the end of the 2016 race when Graham Rahal came out on top in a photo finish.

Two new optional aerodynamic pieces, the barge board and trimmed sidewall, will be available for the first time this season. It is the hope that these aerodynamic pieces will allow for cars to more closely follow and draft each other, and experience less aero wash from the dirty air made by the car ahead.

One of the most exciting additions to the driver line-up this weekend is that Jimmie Johnson will partake in his first oval IndyCar race. Last year, the seven-time NASCAR Cup champion only did non-oval races but late in the year the itch to race in an Indy 500 overtook any safety concerns and Johnson decided to make the transition to full-time IndyCar racing for this year and will attempt to make the 2022 Indy 500. Johnson has had immense success at Texas Motor Speedway, winning seven NASCAR Cup races in his career, making him no stranger to getting it done at Texas, but has had to relearn how to race successfully round here in an IndyCar.

Also racing is AJ Foyt Enterprises’s JR Hildebrand on a part-time schedule. The American IndyCar veteran is racing in place of rookie Tatiana Calderón who is not partaking in the oval races this season. The beloved Illinois veteran Ed Carpenter also makes his usual appearance at Texas Motor Speedway competing for his own now three-car Ed Carpenter Racing team for the weekend.

Scott Dixon keeps his remarkable momentum going with a fourth pole position at the Indianapolis 500. His four-lap average of 231.685 mph topped the Fast Nine Shootout and will start on the front-row alongside Andretti Autosport’s Colton Herta and Ed Carpenter Racing’s Rinus VeeKay.

Colton Herta initially set a blistering four-lap average of 231.655 mph to take provisional pole, but Dixon had other ideas. Dixon was the last to run, and when he landed a 232.757 on his opening lap it was clear that Ganassi’s six-time IndyCar champion had the potential to earn his fourth pole. His drop-off was around 1.1mph across the four laps, so his final margin over Herta was only 0.03mph – after 10 miles of flat-out driving around the Indianapolis Motor Speedway – but the job was done.

The next closest threat came from Rinus VeeKay, one of two drivers for Ed Carpenter Racing in the Fast Nine Shootout in what was a remarkable day for the team. Despite a small wiggle coming out of Turn 1 on his fourth lap, the Dutchman’s 231.511 was enough to start ahead of teammate Ed Carpenter (231.504 mph). They made up the only Chevrolet cars in an afternoon that was dominated by Honda.

Tony Kanaan (231.032 mph) starts ahead of his Spanish teammate Alex Palou (231.032 mph) to round out the second-row. For the Brazilian to out-qualify two of his full-time counterparts is nothing short of sensational.

The third-row will be shared between Ryan Hunter-Reay (230.499 mph), Helio Castroneves (230.355 mph), and Marcus Ericsson (230.318 mph). Meyer Shank Racing will be incredibly happy with Castroneves’s performance to pip the final Chip Ganassi driver in the session.

This afternoon also saw the final-row shootout for those who failed to make the Top 30 in yesterday’s qualifying. Will Power, Simona de Silvestro, Sage Karam, Charlie Kimball, and RC Enerson were all at risk of not qualifying for this year’s Indianapolis 500.

It was Karam, Power, and de Silvestro who eventually qualified for the final-row in what was a significant milestone in the history of The Brickyard. de Silvestro and Paretta Autosport become the first female driver and all female-led team to qualify for ‘The Greatest Spectacle in Motorsport’.

Team Owner Beth Paretta was full of elation and had this to say on their achievement: “This is just the beginning!”

Consequentially, that means both Kimball and Enerson fail to qualify for the Indianapolis 500.

Some other shock performances in Saturday qualifying came from Penske’s Josef Newgarden and Simon Pagenaud. Newgarden made multiple qualifying attempts but was forced to settle with a 230.071 mph four-lap average, good enough only for 21st. Likewise, Simon Pagenaud closed the day in 26th after setting an average of 229.778 mph in what was a difficult day for Chevrolet-powered teams.

Defending Indianapolis 500 winner Takuma Sato will start from 15th. The last to win the 500′ after starting outside the Top 10 was Alexander Rossi in 2016. Incidentally, Rossi just missed out on the Fast Nine Shootout and starts 10th.

With the grid now set, teams have two more practice sessions before the 105th running of the Indianapolis 500, which will take place next Sunday 30 May at  17:00 (BST.)