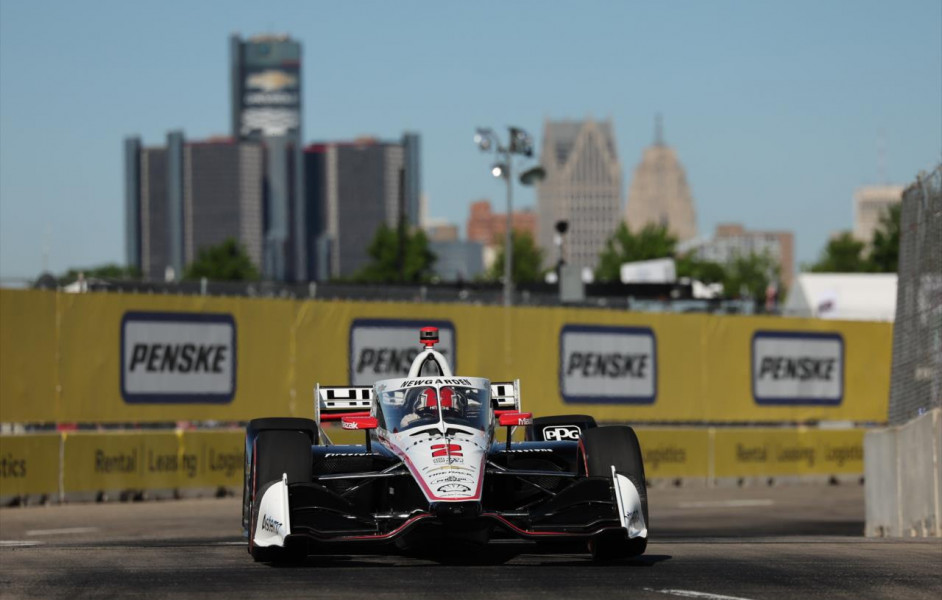 Hondas outnumbered Chevrolets in the Firestone fast six four to two, but Team Penske’s Josef Newgarden with the clock having run out, beat Takuma Sato’s time by one tenth of a second to take his 16th IndyCar Series career pole and earn back to back poles at Belle Isle Park in Detroit with a lap time of 1.15.2153.

Speaking to NBC’s Marty Snider, Newgarden said: “I was about hitting the wall every lap, or every corner I should say. That was a good pole.”

Newgarden was the sole Penske driver to make the Firestone fast six and becomes the seventh different pole winner in seven races so far in this year’s championship. Newgarden said the bigger challenge for them is to convert the pole into a win on Sunday, something they have yet to do at Belle Isle although he did win the first of two 2019 races after starting second.

The fast six was all about the smaller teams as all four of the Daly Coyne Racing and Meyer Shank Racing cars made the fast six. Rookie David Malukas continued his strong performance for Dale Coyne Racing from practice to top the opening session of qualifying in group two and topped the charts again halfway through the fast 12 session with a time that put in him in the fast six for the very first time.

In the fast six, Malukas on a flying lap lost the back end in turn five and had to back out but still set a fast lap later to qualify sixth being only three tenth off fifth place Pato O’Ward. Speaking to NBC, Malukas said: “What an amazing car.”

His Dale Coyne Racing teammate Takuma Sato qualified second after an impressive run when he went to the top with a 1.15.3 with just over a minute to go in the fast six before Newgarden went faster in the final moments.

Round one of qualifying did not go so well for Newgarden’s teammate Will Power who missed out on the fast 12 by three tenths, qualifying 16th . On one of his flying laps, he was unintentionally disrupted by the wake of Álex Palou’s car. Palou also failed to make it out of the opening session, only qualifying 18th. Power, known as the pole master, said to NBC he has still yet to figure out a way to get it done in qualifying at Belle Isle but is optimistic about his chances of getting to the front in the race once again like last year.

The disappointment continues for McLaren SP’s Felix Rosenqvist at Belle Isle as he blocked Jimmie Johnson coming out of the pits when Johnson was on a flying lap and was consequently penalized by being parked and had his time disallowed. He will now start 26th.

The fast 12 saw drivers experimenting between the primary and alternate tires as rubber was getting laid down fast and with grip lasting only for three laps on the alternate red tyres, it was uncertain which tyre compound was better to qualify with. Pagenaud topped the chart midway through the session on the primary black tyre with a 1.15.4 before Newgarden went second on sticker reds, only one tenth of Pagenaud’s time.

Qualifying had been going well for Andretti Autosport with three of their four cars making the fast 12, with Devlin DeFrancesco just missing out, but things suddenly went downhill for them. With less than five minutes to go, Alexander Rossi, who topped second practice, was 12th in the session while Colton Herta was seventh.

The bottom six including Chip Ganassi Racing drivers Marcus Ericsson and Scott Dixon were all on faster flying laps than the leaders as the track became increasingly rubbered in but then Romain Grosjean slapped the wall coming out of turn 12, and broke a toe link that caused his car to veer to the right before violently spinning around into the concrete wall in the final turn bringing out the red flag and ending the session, and consequently stopping his Andretti teammates from being able to progress into the fast six. A frustrated Grosjean said afterwards: “We sucked.”

A hard hit for @RGrosjean.

Round 2 of qualifying came to an end after this incident.

During the fast 12, Dixon said he had to back up into Ericsson after having to slow down for Rossi and Pagenaud ahead that ultimately cost Ericsson and Dixon any chance of making the fast six.

Josef Newgarden and Takuma Sato will lead the field to green for the final Chevrolet Detroit Grand Prix at Belle Isle tomorrow at 3:45pm ET.