Cameron Beaubier stuns home crowds to take his maiden pole position in Moto2. He will be joined on the front row by championship leader, Celestino Vietti in second and Aron Canet in third.

American track, American rider and American team – today’s qualifying ticked all the boxes for the fans in the grandstands. Cameron Beaubier is the first American rider to secure a pole position at home since 2010.

He will be joined on the front row for tomorrow’s race by Celestino Vietti who, despite leading the championship after a strong start to the season, was forced to make his way through Q1. It was Vietti who set the early pace in Q2 but was eventually forced to settle for second.

Aron Canet was able to take third, despite a late crash for the Spanish rider. He fell at turn 17 as the front end folded underneath him and left him in the kitty litter.

Canet wasn’t the only rider to crash as the riders seemed to fight with the COTA track – Augusto Fernandez crashed at turn 17 and, as a result, wasn’t able to set a lap time in Q2. Tony Arbolino crashed at turn 8 but was able to get back up, dust himself down, and set a time that was good enough for fourth. Similarly, Ai Ogura crashed at turn 11 whilst sitting in third. He was eventually shuffled down to 11th.

The various yellow flags caused by these crashes left a lot of riders needing to abandon their laps. However, no one was able to get close to Beaubier’s time of 2:08.751.

Albert Arenas and his GASGAS Aspar teammate, Jake Dixon, set the fifth and sixth fastest times respectively. Jorge Navarro, who has already been slapped with a long lap penalty for tomorrow’s race after crashing under yellow flags during FP3, will start tomorrow’s race in seventh.

Fermin Aldeguer has looked incredibly quick all weekend and set the eighth fastest time ahead of tomorrow’s race. The top ten was rounded out by Sam Lowes and rookie Pedro Acosta. 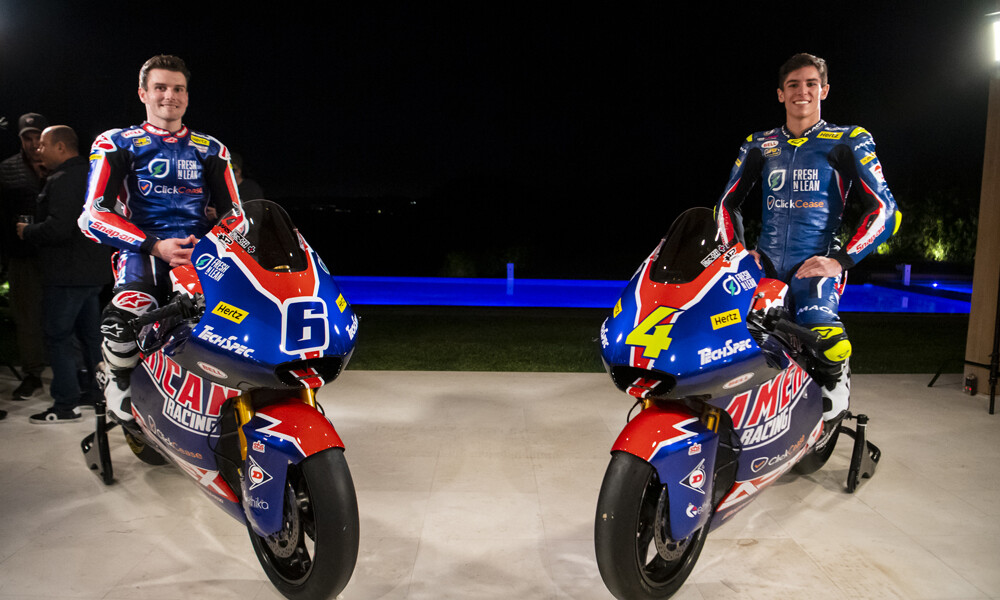 Cameron Beaubier and Sean Dylan Kelly were presented as the 2022 riders for Moto2 team, American Racing.

In front of a home crowd in Los Angeles, American Racing unveiled their 2022 machine. At the same time as presenting this years rider line-up. The team are the only fully American outfit racing in Moto2 and, now, they have two American riders at the helm.

Cameron Beaubier is returning to the team for his second season after scoring a season’s best result of 5th at both COTA and Portimão. He will be joined by Sean Dylan Kelly, who enjoyed 12 wins in MotoAmerica Supersport before then securing the 2021 championship.

When speaking to media, Beaubier stated that “I’m really pumped to have Sean on the team and have two Americans. It’s weird because coming up in racing, I was always the young gun that always had older teammates and now it’s reversed on me.”

When reflecting on his 2021 rookie Moto2 season, Beaubier continued by saying that “I’m not saying that this year isn’t going to be tough by any means, but last year was really, really tough. We had some really good moments, a lot of crashes, a couple of top-fives and a handful of top 10s. It’s definitely something to build on and I’m definitely looking forward to it.”

Hi new team mate, Kelly, commented that “Right now, it still feels unreal for me to looking at this beautiful bike with my number on it, which is going to be the 4 and I’ve always raced as 40. It’s a dream come true for me. This is something that felt really far away only a year ago. It felt like something that was hard to reach.”

He continued “We know how life is and how careers can be with lots of ups and downs. This year has been incredible, and I was able to achieve one of my biggest goals and dreams of being National Champion and not too long after to sign a contract for the World Championship. Honestly, it’s a dream come true for me and my family and something I dreamed of since I was a little kid and started racing at five years old.”

Beaubier and Kelly will be able to put the new American Racing Team machine to the test for the first time on the 22nd of February when the official test kicks off.