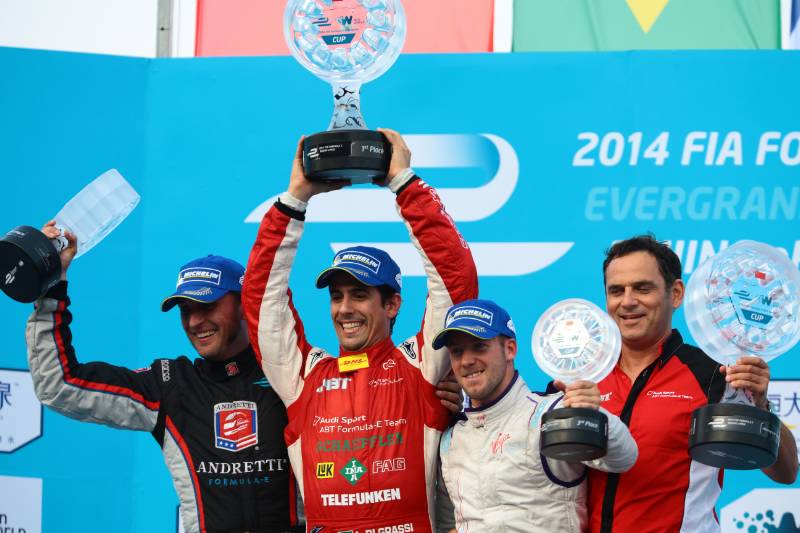 The proposal for a city-based electric car championship was initially conceived by Jean Todt, and presented before politicians Alejandro Agag, the eventual CEO of the sport, and Antonio Tajani in Paris on the 3rd March 2011. However, it would be over another three years before the series would actually come into fruition. The first Formula E race was held on 13th September 2014 in Beijing, the capital city of China. Twenty cars, all of the same specification lined up on the grid, all run by different teams, with some household names such as Renault and Audi amongst the mix. Many of the drivers involved too were familiar to people in motorsport – with the likes of Sebastien Buemi, Jaimi Alguersuari and Nick Heidfeld all participating in the inaugural race.

Nico Prost of Renault e.dams snatched pole position, ahead of the Audi Sport Abt cars of Lucas di Grassi and Daniel Abt, taking three valuable points for the coveted position. It was a sign of things to come – of the dominance that Renault would hold over the championship for the next three years, and the fierce rivalry between themselves and the Audi Sport Abt team. Prost held off pressure from the two chasing Abt cars at the start to keep hold of his lead, whilst Nick Heidfeld managed to get an excellent start off the line, picking off Franck Montagny and Karun Chandhok to place himself directly behind the leading trio. Contact on the opening lap lead to a broken suspension for Bruno Senna who found himself out of contention whilst Jarno Trulli was forced to stop after battery issues. The technical problems faced by the drivers and their teams were to be expected in a newly-fangled championship in which much of the technology had not been subjected to true racing conditions.

Senna’s stricken car brought out the safety car on the second lap, where it remained for three laps before racing resumed. Montagny was immediately aggressive on the restart, forcing his way through on Alguersuari in the exit of turn 19 for P6. The Spaniard also fell victim to teammate Sam Bird, who monopolised on the opportunity to snatch away P7. Montagny continued to push as he disposed of Chandhok in the final corner on lap 10 before moving onto Heidfeld as the race approached half distance. However, Heidfeld held firm as the two cars entered the pitlane to jump into their second cars. The car-swap pitstop is another indicator of how far the battery technology Formula E has come within the last few years, with the Gen 2 cars lasting a maximum of 45 minutes without the need for a second car.

As the pitstops were completed, Prost continued to lead as Heidfeld got the jump on the two Audi Abt cars ahead of him slotting himself into P2, with Montagny beating Abt into P4. Heidfeld began to be pressured by Di Grassi almost immediately, allowing Prost to pull a gap of around 3.5 seconds, extending to just under 4 seconds on lap 16. However, within the next three laps, Heidfeld began to gain vital ground on the race leader, slashing Prost’s advantage to just under a second. The German continued to apply pressure on Prost until the final lap. Heidfeld swung to the right as they approached the final corner at turn 20, only for Prost to turn into the Venturi at the last moment, sending Heidfeld careering off the track and into the barriers. Prost sheepishly pulled over, allowing di Grassi to take the lead of the race and win the first ever Formula E race. It was almost apt in a way – di Grassi was sought out by Agag to become the official test driver for the first Formula E car and was heavily involved in aspects of its development. He was joined on the podium by Montagny and  Bird after Abt was penalised for exceeding the maximum amount of permitted energy, demoting him from the final podium position.

However, as Heidfeld crawled out from underneath his stricken car, he probably never thought that he could have been the one to make history, his mind no doubt was clouded with anger towards Prost for ending his race. Looking back on the race now, and the strong position that Formula E finds itself in, with arguably the largest number of manufacturers in any single-seater motorsport series and the highest pedigree of drivers now pushing for careers within the championship, it showcases how far the series has come in a few short years – both in terms of technical development and public opinion.

Formula E is becoming a well-known brand, a far cry from the days where it was written off as a graveyard series for ex-F1 drivers – it now flourishes, bringing the concept of sustainable energy into the heart of cities with competition for seats in the series fierce and manufacturing giants such as Mercedes, Porsche and Audi actively creating programmes to race in the series. But every legend has to start somewhere – and for Formula E, it was in Beijing, where twenty cars lined up on the grid, not knowing that in a few short years, they would help to forge the beginnings of a new championship that grows from strength to strength. It is for this reason, that the Beijing ePrix will be remembered as a legendary race and for sparking the beginning of a new, exciting motorsport series that would continue to divide opinion.