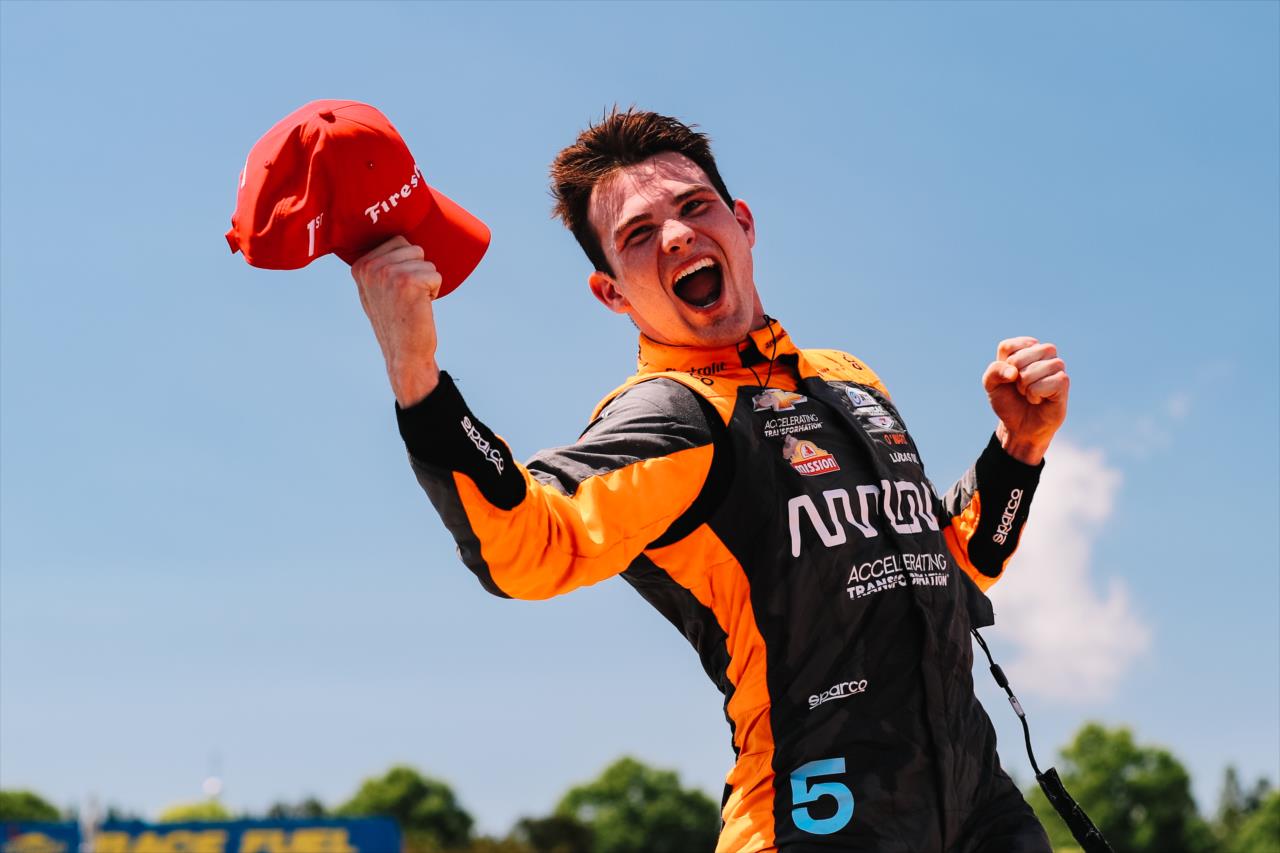 Pato O’Ward on his out lap from his final pit stop, lap 62 of 90, sent it down the outside of leader Rinus VeeKay going into the turn four hairpin, who had led the entire race so far, and drove around the outside of him coming out of the hairpin to go on to win the Honda Indy Grand Prix of Alabama.

VeeKay had led the first two thirds of the race, with O’Ward following closely behind the entire way and closed up to VeeKay on their final in-lap on lap 61, to bring the gap down to under a second entering the pits. O’Ward had the final say of the weekend, as while VeeKay had took the pole away from O’Ward in qualifying on Saturday, a fast final pit stop allowed O’Ward to close up to VeeKay on track and use push to pass on him going into turn five and get past on the inside. O’Ward would lead the rest of the race.

Álex Palou sneaked into second place via the final pit stop cycle and would hang onto O’Ward for the remainder of the race, only being less than two seconds behind, but would never close up to O’Ward. VeeKay would fall off the leaders pace falling back to 11 seconds but would hold off Will Power to claim the final podium stop.

O’Ward talking in victory lane about his move on Palou said: “I knew if I had the opportunity, it would have been right then and there. Once we did that, it was cruise to Victory Lane.” O’Ward is also trying to negotiate a better contract deal with Arrow McLaren SP. The race victory is sure to help O’Ward in doing so.

Will Power had a remarkable recovery of a race after qualifying 19th to bring the Verizon Chevy home in fourth place. Power had been playing the long game and had taken good care of his tyres, allowing him to methodically work his way through the field. Scott Dixon as expected, quietly worked his from 13th all the way to fifth place by the end of the race.

The viability of the three stop strategy would end on lap 33 however when Callum Ilott, battling with Helio Castroneves for 13th place, on the outside overshot turn seven and went for a spin, ending up stuck in the gravel trap, bringing out the full course yellow.

The three stoppers were forced to pit under the caution to stay competitive with the two stoppers and would have to come from the back to try to gain as many positions as possible by the end. Herta and Newgarden were the fast chargers for the first few laps until Herta would leave Newgarden behind who was getting stuck in traffic while Herta would work his way inside the top 10. The final pit stop cycle saw Herta find a new gear. While Newgarden stagnated in the midfield in 14th place, Herta made a hard charge all the way up to 7th, often by divebombing down the inside of cars in turn 16.

Being overly ambitious, Herta on lap 74, came from far back and sent it down the inside of McLaughlin in the turn four hairpin only to run out of space due to a turning McLaughlin, and ended up spinning out off McLaughlin’s left rear tyre and went for a full 360 degree spin before getting it going again. Herta would fall back to 10th place as a result.

On lap 40, Helio Castroneves took out Jimmie Johnson in turn nine, after getting way too hot into the sequence of corners and collected and spun out an unsuspecting Johnson. Castroneves was only told to give the place back by race control.

Romain Grosjean would get into a scrap with Graham Rahal in the closing laps. After reporting that Rahal was cutting him off in the turn four and five hairpin, he went down the inside of Rahal again, and side swiped Rahal aggressively twice coming out of turn five while failing to take the position.

Rahal immediately came on the radio and said “This guy is a punk. He hit me on purpose”. On the final lap, Rahal would begin running out of fuel, allowing Grosjean to slip past him for 7th place in turn five after all. Rahal would finish 8th.

The race results see O’Ward move from ninth to fifth in the championship standings while Palou takes over the championship lead from Newgarden who dropped to third in the standings, with his Penske teammate McLaughlin holding down second.

The upcoming races sees the Month of May really get under way for the NTT IndyCar Series with the GMR Grand Prix of Indianapolis on the 14th May and the double-points paying 106th running of the Indianapolis 500 on the 29th May.