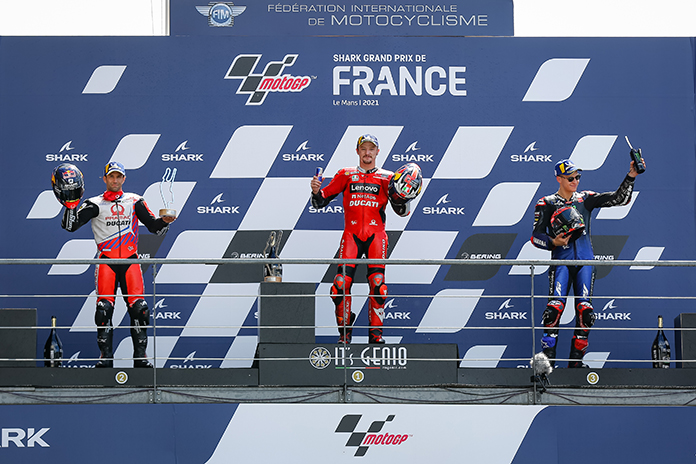 Ever changing track conditions at Le Mans caused for some spectacular qualifying. For a few moments it looked as if Marc Marquez (Honda) was going to grab his first pole since 2019! But local boy – Fabio Quartararo (Yamaha) had other ideas and snatched it away. Leading from Maverick Vinales (Yamaha) and Jack Miller (Ducati) on the front row. Marquez started 6th place on the grid.

Valentino Rossi (Petronas Yamaha), looked in good form and had a flying lap, which would have taken him to front row, but an almost high-side in the last corner, removed those hopes. He slotted into 9th place.

The unpredictable track conditions had meant that Sunday’s race had been declared a flag-to-flag race. The first one in four years – meaning some of the riders had never experienced this before.

This was going to be interesting:

Le Mans had it all – rain, sun, bike swaps, crashes, penalties! As the drama unfolded in-front of us, one thing was for sure – Miller gave yet another ‘Thriller’ race!

As the riders lined up on the grid, the dark grey clouds loomed overhead. Weather forecasts predicted the rain wouldn’t emerge during the race. Just in-case though it had been declared a flag-to-flag event, meaning the riders had their spare bikes ready with wet tyres on, should the rain interfere with the proceedings.

Miller got a lighting start and led the pack into lap one, from Vinales and Quartararo. But it was Pol Espargaro (Aprilia), that had a ‘moment’, rejoining in the middle of team-mates Rossi and Frankie Morbidelli (Petronas Yamaha), Morbidelli had to take evasive action, leaving him holding his knee in the gravel. Already having hurt it during a freak pit-lane accident in qualifying. (He was able to later rejoin, but finished outside the points).

Vinales soon took first and started to slowly break-away. Were we seeing Maverick finally not letting the weather conditions mess with his head? M. Marquez was fighting for 4th place with Alex Rins (Suzuki) and Takaaki Nakagami (Honda)

All to quickly though, bustling started to happen in the pit lane, as the pit crews started to get the second bikes ready for the inevitable change over. Marshals were waving the red and white flags track-side and the riders now had the option to come in and switch bikes. The rain had come earlier than expected!

Quartararo took full advantage to the change of weather conditions and swept through to first place. Vinales, sadly couldn’t help but react negatively to the wet weather and immediately went backwards.

Jack wasn’t prepared to just let Fabio have first place though and soon they were battling for first.

The rain continued to pour, getting heavier by the second. Miller went into the gravel but saved himself and with 23 laps to go he and all the riders decided to enter the pit lane to swap their bikes. M. Marquez made a swift exit from pit lane securing first place. The reigning champion Joan Mir (Suzuki) however, accidently fell upon entering the pit lane.

Then turn four, saw his team-mate Alex crash. Both Suzuki’s were having a race they would want to forget.

Then seemingly disaster for the Ducati boys! Both Bagnaia and Miller got a double long-lap penalty for exceeding pit-lane speed limits. The speed limit is 60km/h but both were recorded as over it.

With Miller in third place, being led by Quartararo and Marquez, he didn’t want to give up any places, but he took his first long-lap the next lap (lap 9) and then his second on lap 10. Getting them out the way with quick.

Marc Marquez looked like his old self again and even pulled away from Fabio leading with 1.380 seconds and then by 1.973 seconds. He had said that these weather conditions could fall into his hands on Sunday.

Meanwhile, Rins had managed to return to the race with his second bike.

All hearts leapt in unison though as on lap 8, Marquez took a high-side from first position, on the final corner! Launching himself from his bike and rolling through the gravel. He managed to also re-join the race (using the same bike, albeit missing some of its wings).

With Miller taking his second penalty, Quartararo set about extending his lead. Little did he know that he too had collected a penalty. Never having raced a flag-to-flag race he had gone into the pit-lane to swap over his Yamaha’s just to ride into Vinales’s pit box. This was seen as a safety risk which meant he too had to take a long-lap soon. He decided to take it lap 12.

Cutting quickly through the pack, aware that this was his best chance at getting any points this race, Marquez was now the fastest man on track. Ignoring his pain and the rain.

An issue with Lorenzo Savadori’s Aprilia saw him retire from the race. On the same lap Miguel Oliveira (KTM) slid off on the nefarious turn 3. It soon took Rins as well, now his second time seeing the gravel during the race.

Meanwhile Marquez was still slicing through his competitors and with 13 laps to go was in 15th place. His younger brother Alex Marquez (Honda), it is worth noting, was having a brilliant race, from 19th on the grid to 5th by lap 15. By lap 17 M. Marquez had clawed back to 12th place.

Nakagami had his position taken away from him by one of the local boys – Zarco, who was picking up speed – quick. He was now in 3rd place with fellow country-man Quartararo in his sights and the leader – Miller not far away either. Could Le Mans finally have a French winner?

With 11 laps until the end, Aleix Espargaro’s Aprilia malfunctioned, leaving the team with DNF’s for both bikes.

Conditions changed again – the track had dried up and the rain ceased. All riders were on their second bike with wet tyres. They could return to the pits again and swap a second time for slick tyres but none of them wanted to be the first to juggle with fate.

Then absolute heartbreak – Marc Marquez crashed out again – turn 6, lap 18, from 11th place. This time he was unable to pick the bike up and return.

Miller had a 5.475 second lead over Quartararo, who had a 3.763 second gap to Zarco. But this was decreasing quick! Zarco had both medium wet tyres, where Miller and Quartararo had one soft and one medium tyre each. With the track getting drier each lap, the gap between the two Frenchmen rapidly shrunk. On lap 21 of 27 the gap was 0.696 seconds.

Johann passed Fabio with relative ease with 6 laps to go. Could he catch Miller?

Last lap – the track was completely dry – the riders were all still on wet tyres – there were two Frenchmen hunting down the Australian in first. But it was a Thriller performance from Miller who was in complete control, taking back-to-back victories! His first ever time doing this in the premier class and only his 3rd ever win in Moto GP. He is the first Australian to win back-to-back races since Stoner (Ducati) in 2012.

It was like a win for Fabio (who had never finished on the podium in wet conditions before) and Johann who rounded off the podium in France.

It was a rollercoaster ride for Miller who said “…they’re gonna red flag this for sure…” aren’t we all glad that they didn’t?

Mugello (30th May) is the next round of the championship and is notably a Ducati track. Can the Dukes keep up this dominating pace? Or will Yamaha fight back and claim the top spot once more?