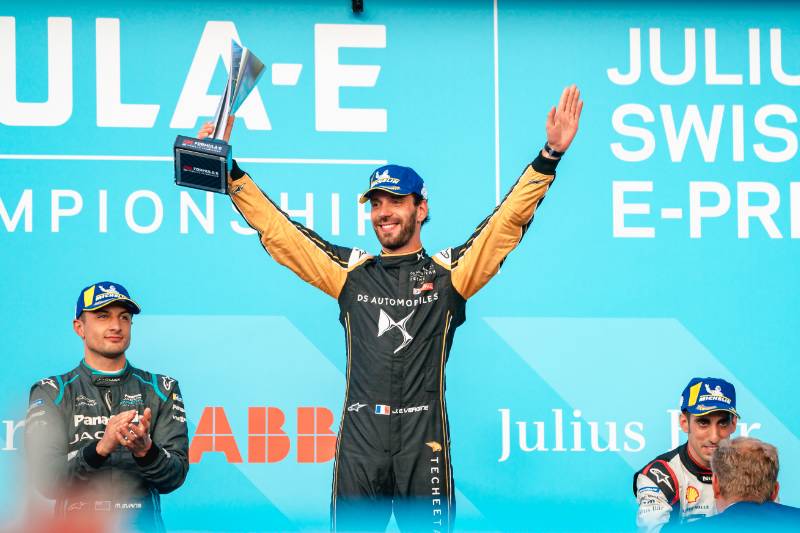 Jean-Eric Vergne cemented his status at the top of the championship yesterday by claiming a dominant third victory on the streets of Switzerland. Starting from pole position, the reigning French champion looked unbothered in the penultimate round of Formula E, managing to hold off an aggressive Mitch Evans to seal the win and extend his lead to 32 points over his nearest rival,  Techeetah teammate Andre Lotterer, with Evans and hometown hero Sebastien Buemi taking the last two podium positions.

Qualifying was again crucial as the drivers had limited track time yesterday in shakedown with the circuit nestled in the streets of Bern still being built. Di Grassi was the first man out on track, hoping to consolidate his second placed position in the Driver’s Championship, but it was Techeetah’s Vergne who impressed to scoop the top spot in the first group, ahead of his teammate Lotterer and Robin Frijns by three tenths. However, Vergne’s lead was soon eroded by Mitch Evans, winner of the previous ePrix held in Switzerland whilst Sebastien Buemi and Daniel Abt slotted into P3 and P4 respectively at the halfway mark. Edo Mortara, another local, on the other hand struggled and could only scrape into P14 in his Venturi whilst Pascal Wehrlein continued his excellent qualifying form by snatching P3, the rookie’s fifth appearance in superpole seemed inevitable. The final group could not challenge Evans’ lightning-quick time, bar Maxi Gunther who took P5, an excellent showing for the rookie hoping to impress ahead of the new season. Evans took the spoils in the initial stages, followed by Vergne, Wehrlein, Buemi, Gunther and Bird.

Bird set the initial pace with a decent time of 1.19.536 in the opening superpole stages, but his time was soon eclipsed by Gunther who found an additional one tenth in his Dragon. The track conditions continued to evolve as Buemi was the next driver to snatch the provisional pole away by two tenths of a second in front of a delighted home crowd. Wehrlein looked set to continue his excellent qualifying run, however, despite a brilliant first sector, the Mahindra driver locked up into turn 9 and had to settle for the provisional front row behind Buemi, beaten by just four thousandths of a second. However, it was Jev that continued his excellent form this weekend with a monster lap of a 1.18.813, three tenths clear of the other leaders. It fell to Evans to prevent Techeetah dominance, but the Kiwi just fell short of the mark, having to settle for P2 as Vergne took his first pole position of the season.

Vergne started strongly from pole, but there was chaos within the opening lap as D’Ambrosio shunted Frijns into the wall, putting the Dutchman out of the race and out of championship contention with driveshaft failure. The race was red flagged whilst Frijns’ car was extracted from the circuit and the race clock was reset. As racing got underway again, Vergne came under pressure from Evans and the Jaguar driver continued to press at the reigning champion for the remainder of the race.

On the other side of the Virgin garage, Bird fought his car through the order, first dispatching of Gunther for P5 before squeezing Wehrlein for P4 before the German rookie ground at a halt just before the attack mode zone presumably with a battery issue. Bird continued his charge, piling pressure on Buemi for P3 before the Swiss driver snatched it back a few laps later. Bird then fell victim to a hungry Lotterer, after a mistake caused him to lock up and the Techeetah driver was able to dive down the inside of the Virgin car. As the time ticked down, the top four were within seconds of one another but Vergne was able to hold off Evans’ attack to claim his third victory of the season and claim the voestalpine European race trophy. Evans had to settle for P2, with Buemi claiming the final podium position much to the delight of the Swiss crowd.

The final two rounds of the Formula E season takes place in New York on July 13th and 14th.