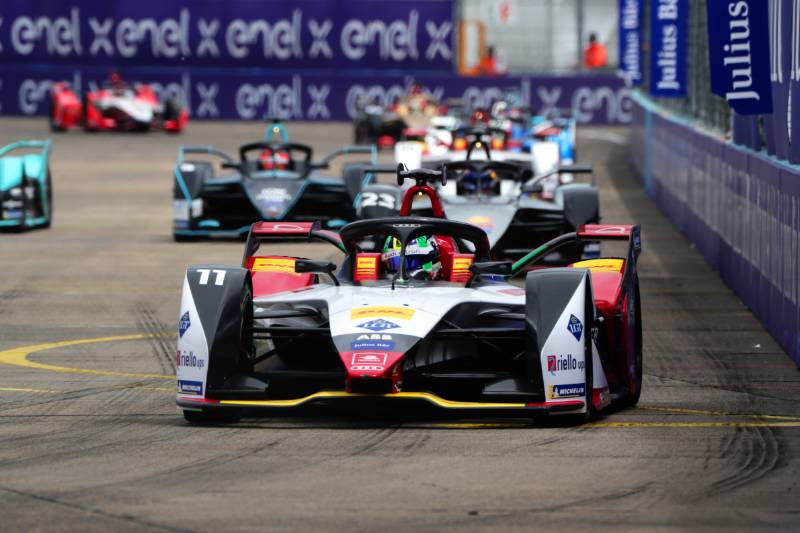 Lucas di Grassi gave Audi the bragging rights over rivals BMW and HWA by claiming his second win of the season at the team’s home race. Although it was not a mirror of last year’s dominant display with Daniel Abt and di Grassi’s 1-2, the latter swept past polesitter Sebastien Buemi and remained untroubled throughout the race to move up to second in the championship, with Buemi and current reigning champion Jean-Eric Vergne claiming the remaining podium positions.

Qualifying was again crucial with group one again struggling to stay in the coveted superpole spots as the track conditions improved. Di Grassi was the quickest man in the first group whilst Andre Lotterer was hampered by the Brazilian Audi driver mistiming his lap, leaving his hopes of superpole increasingly slim. Robin Frijns also suffered with a problem with his Virgin car, coupled with a five-place penalty from the previous race to leave him dead last. HWA on the other hand, enjoyed an excellent qualifying session with Stoffel Vandoorne and Gary Paffett making their way into the top six superpole shootout. Alex Lynn also impressed to take his first appearance in superpole, but it was Nissan’s Buemi who took the spoils in the initial stages, beating out Vandoorne for the provisional top spot.

Di Grassi was the first man out on track in superpole and set the initial pace, slotting himself into P1, a position he would continue to occupy as Paffett, Lynn and Alexander Sims failed to topple the Brazilian’s time. However, it was fierce rival Buemi who continued Nissan’s impressive qualifying record to break the deadlock by four-tenths of a second. With again Vandoorne again showcased his impressive qualifying form by disposing of the Audi driver by three-tenths of a second, another excellent result for the Japanese outfit. It fell to Vandoorne and HWA to prevent the fourth Nissan pole of the season and net the coveted top spot for themselves at their home race, but Vandoorne could not match Buemi’s time, trailing the Swiss driver by three-tenths of a second. Buemi took his second pole position of the season with Vandoorne and di Grassi rounding out the top three.

Buemi managed to hold the lead in the opening stages of the race, as Vandoorne was disposed of by di Grassi for P2. Six laps later, di Grassi performed the same manoeuvre heading into turn six to snatch the lead away from the leading Nissan. It was a position that di Grassi upheld for the remainder of the race, relatively untroubled by his racing rival and spurred on by the contingent of Schaeffler and Audi fans in the grandstands. Lotterer made ground in the opening stages, fighting his way up through the order after a poor qualifying, whilst his teammate Vergne followed suit, a podium very much on his mind, carving through the field from P9. BMW’s Antonio Felix da Costa was equally spurred on to claim his second win of the season as after starting from P8, he had managed to force his way through the field to pressure Buemi for P2. Buemi conceded the spot, only to activate his attack mode and claim the position back from the BMW, leaving da Costa in P3.

As the time ticked down, Vergne began to pressure da Costa for the final podium position, with Abt and Vandoorne battling behind. Vergne eventually got the job done into turn 10, snatching P3 away as Lynn’s Jaguar forced the racing to neutralise when his car stopped on the start-finish straight with what appeared to be a hydraulics issue. It was a shame for the Jaguar driver who had been running in the points when his car stopped, bringing out the full course yellow. Another driver to be hit with bad luck was Lotterer who after storming up the standings, was forced to retire his Techeetah due to an overheating battery issue, ending his home race moments before the end.

Buemi held off a hungry Vergne in the closing stages of the race to keep hold of P2, his first podium since last season’s Marrakesh ePrix, whilst di Grassi held firm under pressure and sailed to victory, sealing a home win for Audi for the second consecutive year. The win also catapulted the Brazilian up the standings, but it was not enough to disturb current championship leader Vergne whose P3 finish allowed him to extend his lead at the top of the standings.

Formula E will return for the inaugural Bern ePrix on May 23rd.