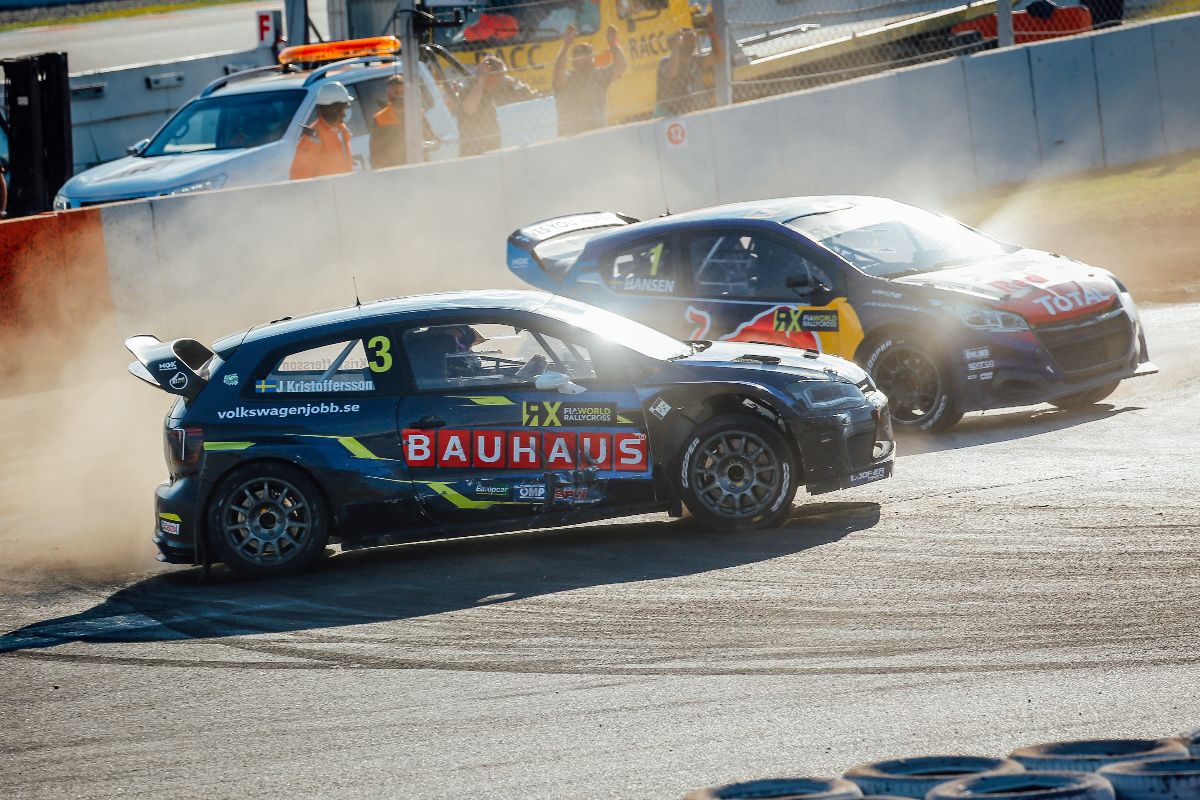 The Circuit de Barcelona-Catalunya plays host to the seventh and eighth rounds of the FIA World Rallycross Championship. This is the sixth event of the year to be held behind closed doors and only 295 event personnel have been permitted entry, if they produce a negative PCR test result before entering the venue.

Championship leader Johan Kristoffersson has taken three wins this year in rounds one, three and five and the double world champion is looking strong as he is currently 17 points ahead of his nearest rival, Mattias Ekström.

Ekström, the 2016 world champion, has won rounds two and six in this COVID impacted season and has only missed out on being in the final on one occasion. This has led KYB Team JC to first in the team’s standings going into this round. His performances have been supported by his teammate Robin Larsson, who achieved his first podium in the second round in Latvia. He currently sits fifth in the individual standings.

Niclas Gronhölm has achieved one win at his home event in Finland and this has helped him into third place in the standings. GRX Taneco also have Timur Timerzyarnov who came third in his one final appearance. They currently sit in third place behind Team Hansen in the team’s championship standings.

Timo Scheider of ALL-INKL.COM Münnich Motorsport has had his best start to a World RX season by making it to three finals and sits in eighth place in the standings. Team owner René Münnich will not be contesting this round and hands over his car to Mandie August who is only the second ever female to start a World RX event.

Monster Energy GCK RX Cartel had a more successful weekend in Latvia by both drivers making it to the semi-finals. Norwegian Andreas Bakkerud has improved to seventh in the standings and Liam Doran sits in thirteenth place.

GCK Bilstein driver Anton Marklund has been suffering multiple technical difficulties but has worked through these to sit in tenth place.

GCK UNKORRUPTED have withdrawn from this event stating that their cars are not race ready and this was the safest decision for their drivers. This means that Guerlain Chicherit and Rokas Baciuška will not be participating in rounds seven and eight.

Joining the permanent competitors this weekend is Tamas Karai in the Audi S1 RX, who also competed in Finland finishing in thirteenth and sixteenth place in rounds three and four respectively. Oliver Bennett returns to World RX action in his Mini Cooper for the first time this year. Patrick Guillerme joins the event in his Hyundai i20 and Enzo Ide will be making his first start of the year in his Audi S1 RX.

The rallycross track is situated around turns 10 to 15 of the Formula 1 circuit and is 1135m long. 60% of the track is asphalt and the remaining 40% is gravel. The safety of the track has been improved this year by introducing a steel guard rail where the rallycross turn three, a long right hander, is replacing a previously used tyre wall.

The event starts a 1030 local time on Saturday and 0930 on Sunday and if the previous events are anything to go by, this will be a spectacular event to watch.

He started out in the RX Lites Cup before progressing to the European Rallycross Championship. He made his debut in the World Rallycross Championship racing at RX Argentina in 2014. Since 2016 he has been a full time driver on the Supercar grid where he burst onto the scene with Olsbergs MSE before signing for MJP Racing this season.

He has also competed in Global Rallycross and RallyX On Ice.

He has one WRX win to his name (World RX of Germany 2016) and is remembered for THAT move, ‘Round The Outside’, at Estering last season.

These are his Quick 10 questions and he is……Kevin Eriksson.

1. What is your favourite circuit and why?

My personal favorite track is the more old school type RX track and to name 2 Montalegre and Estering. There’s more flat out and sideways action and that’s a lot more fun to drive if you ask me

2. Who is/was your racing idol?

Since I grew up in paddocks in both Rally and Rallycross whatching my father race I obviously looked up to him a lot and still is but another driver I always enjoyed is Kimi Raikkonen, for just being himself.

3. Who would you regard as your toughest opponent?

During the beginning of my career I had a lot of good battles with my namesake Kevin Hansen. Now we’re both in the top tier of RX and racing against guys like Ekstrom, Solberg, Loeb so I would say that those more experienced guys are the toughest at the moment.

4. Considering racers of all time, you are a team principal and money is no object. Which two racers would you have in your team?

If I would be looking at results and making the choice I would go for Michael Schumacher and Sebastien Loeb for obvious reasons. Good mix of disciplines and a lot of championships.

But back to this day I would go for youth and my little brother Oliver Eriksson and Mitchell DeJong.

5. If you could invite four famous people to dinner (past and present), who would you invite?

Hard question…. I would invite LeBron James, Zlatan Ibrahimovic just because I’m a big fan of them and their sports as well as Hmmm… Eminem and Michael Jackson because I like their music. This dinner wouldn’t last very long I guess, haha

6. Personal racing number? What is it and the reason behind it?

My number is 96 and it’s a real simple reason behind it. I’ve never really been the number guy but when I started with RX you needed to have a personal number so I just went with the year I was born. I also liked 96 because it’s say 96 if you look both from the front and back

7. What is the best race you have been involved in?

My best race so far during my career must be World RX of Estering last year where I grabbed my first World RX victory and did the Round the outside move around the guys in the first corner.

8. Is there a race or series you have not competed in, that you would like to or had wanted to?

I have always wanted to try one of the 4wd 900hp Pro 4 trucks they race over in the US. Those trucks looks like a lot of fun.

9. How did you get into motor racing? What ignited that spark?

My whole family have been into different types of Motorsport but the biggest influence was still my dad since he raced in high level in both Rally and Rallycross as I grew up.

10. What is the best advice in racing you have been given?

Oh there’s been a lot but the most recent one was connected to tennis and goes like this. “There’s only one ball and that’s the one your playing right now” which means that whatever happened in the heat before you need to forget that and focus on the next.

I would like to thank Kevin for taking the time out from his busy WRX schedule to answer these Quick 10 questions and wish him all the best for the rest of the season. Thanks also to Max Pucher at MJP Racing for making this interview possible.