It was business as usual for Smidl who took pole position, two tenths ahead of ROG driver Stefanko. Chlebec was sixth tenths adrift securing third place ahead of Honzik. Polesny and Blazek complete the third row whilst Kostialik lines up alongside Sykora on the fourth row. Reigl stepped in for Dolezal at SECCO+ and qualified in ninth ahead of Lukas in tenth and Zoubek in eleventh. Prochazka could not participate in the race due to the technical issues.

Often renowned as the home of Grand Prix racing, Silverstone is located in Northampton in the United Kingdom. Built on the site of a World War 2 Royal Air Force bomber station, its three airfield runways lie in a triangular shape surrounding the race circuit. The site was first used for racing in the 40s but it wasn’t until 1950 where it hosted the first ever World Championship Grand Prix under the European GP.

Silverstone is the perfect venue to host the first of four races with the new Formula hybrids, F1-spec 2017 cars. At the green light it was a clean start for the pack who all made it through Abbey unscathed. However disaster struck at Village as Sykora knocks the rear of Blazek sending the LYNX pilot into a spin and blocking off the middle of the track forcing the rest of the field to take evasive action. 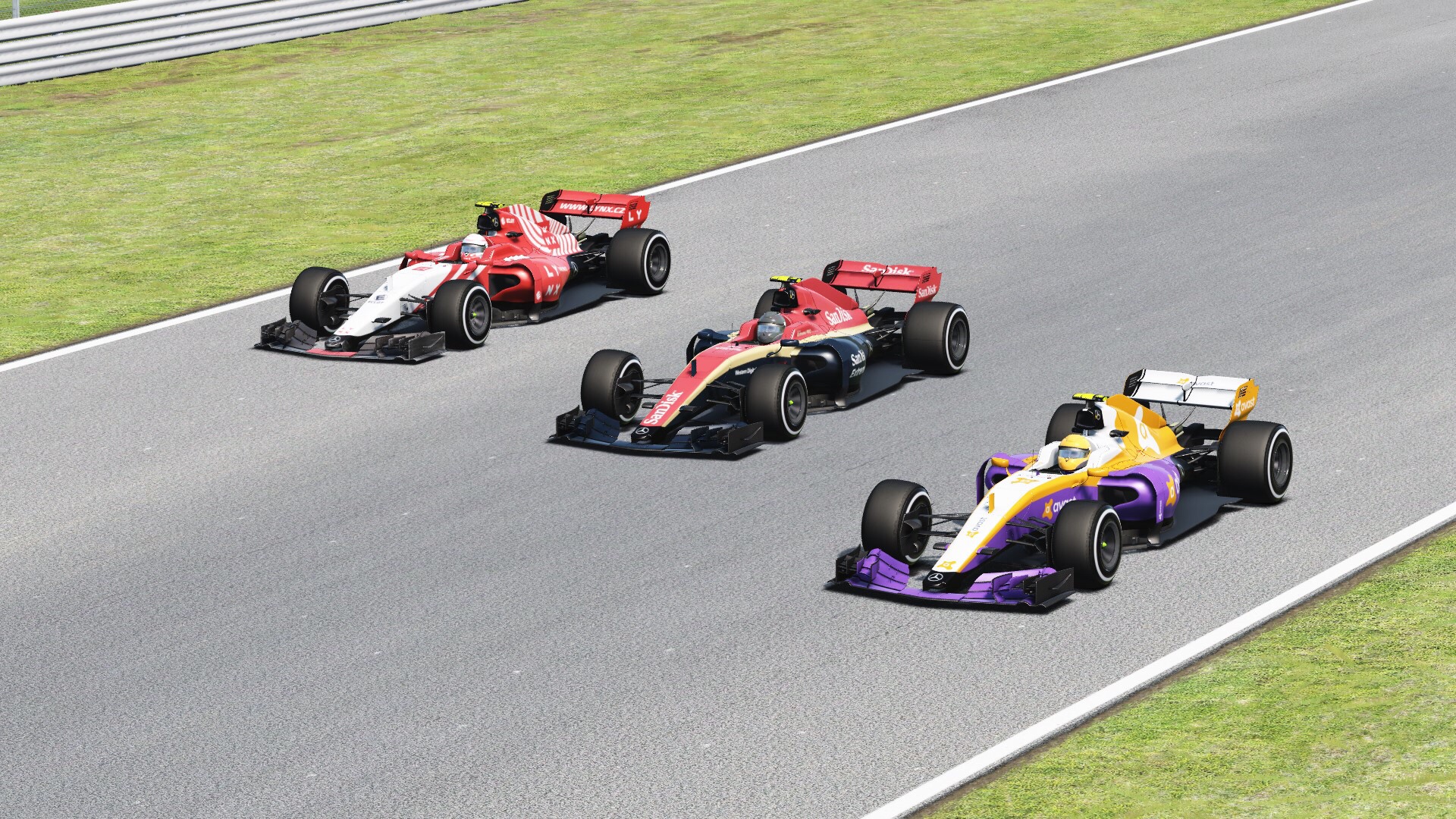 Meanwhile Blazek slung his Lenovo Legion around the outside of Luffield to take fifth place from Polesny.

A good exit out of Chapel brought Sykora on the tail of both Zoubek and Lukas and the trio headed down the Hangar Straight three cars abreast. With Zoubek coming out on top by shooting around the outside of Stowe and Sykora slotting up the inside, Lukas was demoted to tenth. 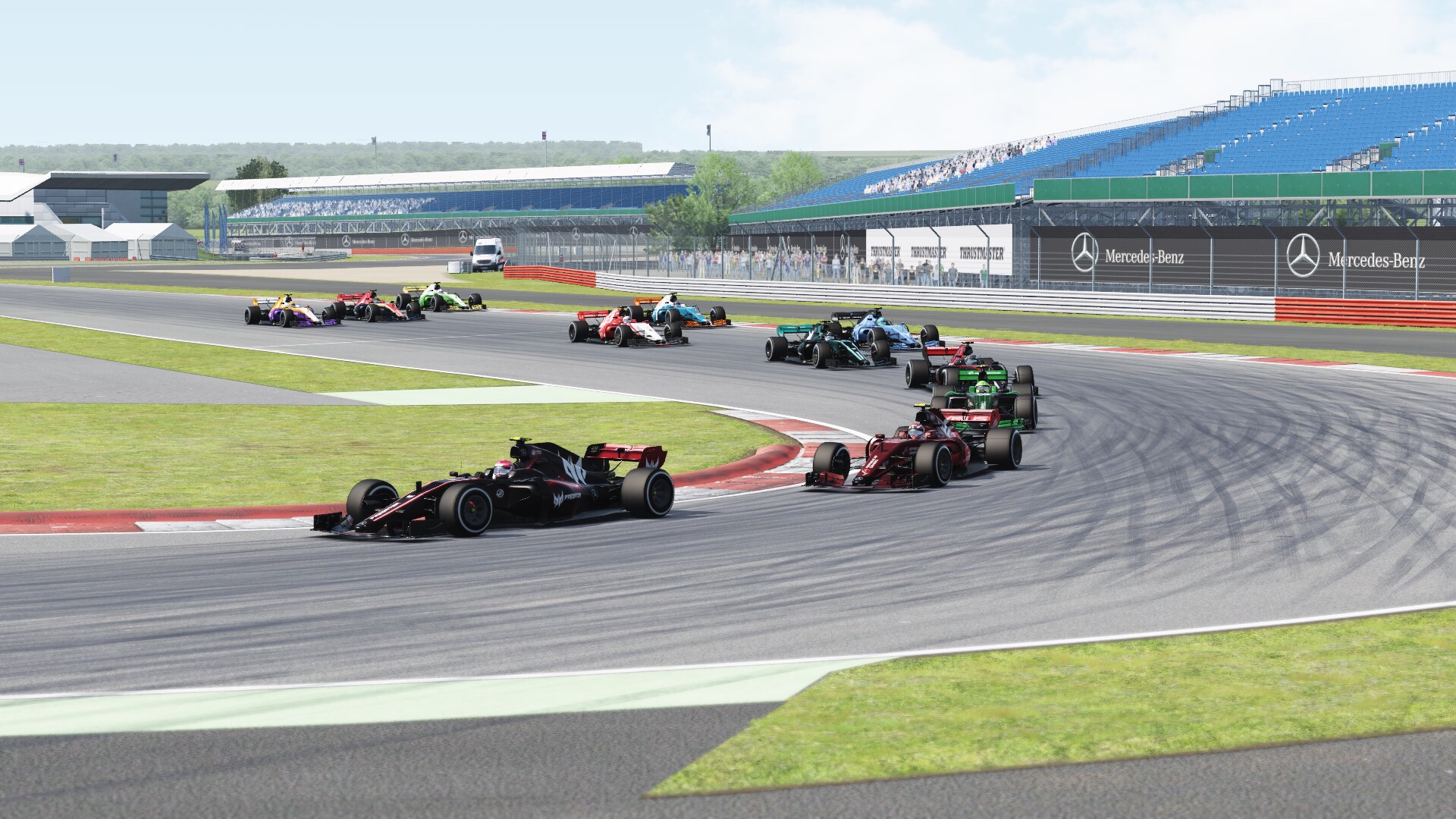 Kostialik faced a moment of panic having to defend off Zoubek, who lightly hit the Xiaomi CZC.cz driver into turn four. Even with the knock, Kostialik charged down the Hangar Straight in front and despite the two-battling side by side through Brooklands and Luffield, Kostialik held on to seventh place.

However the aforementioned battle had allowed Sykora to catch up. As Zoubek ran wide at Copse, Sykora was gifted seventh place and slotted into the slipstream of Kostialik before ducking to the inside of Maggots where the two made contact sending the latter into a spin.

Down the Hangar Straight Zoubek fought back at Sykora but running around the outside of Stowe, the LYNX driver held on. A flick of the rear then sent Zoubek off at Vale marginally missing Sykora; but unfortunately the spin dropped him from eighth to last.

After all the pit stops had been done, Polesny was on a charge on fresh super soft tyres and soon the ten second margin to Blazek had all but gone by lap 23. As the duo battled side by side through Brooklands, Luffield, Woodcote and through Copse, it was Polesny who came out on top, stealing fifth place with two laps to go.

But the checkered flag was shown, crowning Smidl the 2018 champion. Stefanko came across the line in second ahead of Chlebec in third. Honzik had a quiet race in fourth, as opposed to Polesny who ended up in fifth ahead of Blazek in sixth. Sykora and Kostialik were seventh and eighth. Reigl and Lukas complete the order as Zoubek retired and Prochazka did not start.

Once again do not forget to vote for your driver of the day and to follow us on our social media platforms. Next time Mercedes-Benz Virtual GP championship heads to Red Bull Ring, Austria.